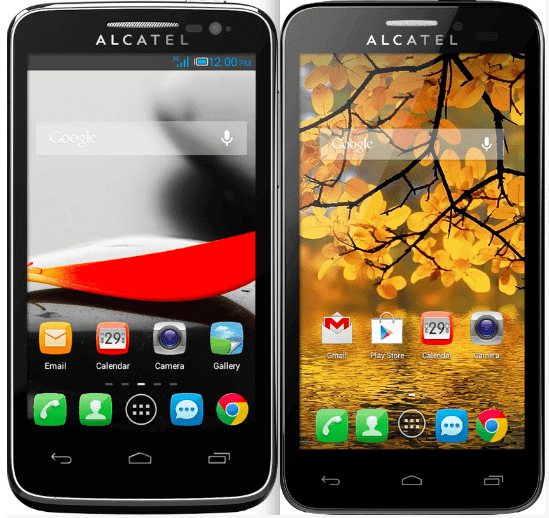 On Wednesday, T-Mobile announced a few new mid-range phones for their network. A couple are from Alcatel, which is a company that has never really brought their phones to the US. But they do have some nice devices. Back at Mobile World Congress they announced a device with some pretty high-end specs that was dirt cheap, of course it never made it's way out of Europe though.

The Alcatel One Touch Evolve and Fierce  are mid-rangers that go for $29 and $19 down, respectively and will have an EIP of $3 and $6 respectively. Which really isn't that bad of a price. As you can see from the image above, it appears to be running near stock Android with a sort of icon pack on top. The Fierce is featuring Android 4.2, 4.5-inch qHD Display, 1.2GHz quad-core MediaTek processor and 4G speeds (it's not specified if that includes LTE or just HSPA+, but I'd assume the latter.). Not the Evolve features Android 4.1 along with a 1GHz MediaTek processor. It's more of a budget phone as you can tell. But still a nice looking one.

Onto the Galaxy Light. This one is also a mid-ranger from Samsung. It's got the same design that we've seen with many other Samsung devices. Nothing like the Galaxy Note 3, unfortunately. It's packing a 4-inch WVGA display, with a quad-core 1.4GHz processor, 1GB of RAM along with Android 4.2.2 – Jelly Bean. There is 8GB of internal storage along with a microSD card. It's also packing a 1800mAh battery with 5MP camera. So it should have some pretty good battery life considering the size and resolution of the display. There's no pricing or availability for the Galaxy Light yet, but I'd expect it to be priced around the same as the Alcatel One Touch Evolve and Fierce.

So we've got a few new mid range and low-end devices coming to T-Mobile. Which is great for those that just need a phone and don't need the power of the Galaxy Note 3, G2 or the Galaxy S4. It's also great to see T-Mobile having so many phones in every price range for customers to choocse from.