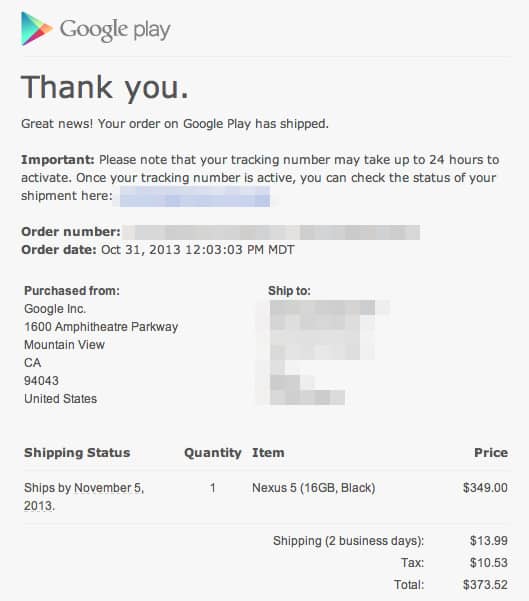 We were hoping that Google had learned a lesson from last year's Nexus 4 fiasco on the Play Store. So far it looks like they have. I haven't heard any issues about the Play Store crashing, or people getting charged multiple times for one device, or even of it selling out. It has sold out, well sort of. The shipping date was November 8th, last time I checked. Which still isn't bad. That's next Friday. Last year we were seeing shipping dates of 12 weeks. Which is pretty sad.

A couple of our staff members did order a Nexus 5, and neither of them have received their shipping confirmation yet. But according to Droid Life, it looks like they've gotten theirs. Which is great news. Getting same day shipping is the best thing ever, especially when dealing with Google Play. To top it all off, if you selected 2-3 day shipping, then you could have your Nexus 5 on Monday or Tuesday. To bad they didn't launch this on Tuesday so we could have our Nexus 5's today or tomorrow and play with them all weekend, right?

It's great to see that Google has learned their lesson with the Play Store. I'm glad to see that people were able to order their Nexus 5 today without any real problems, other than the fact that it sold out quickly once again. But that's always going to happen with anything Google puts up for sale.