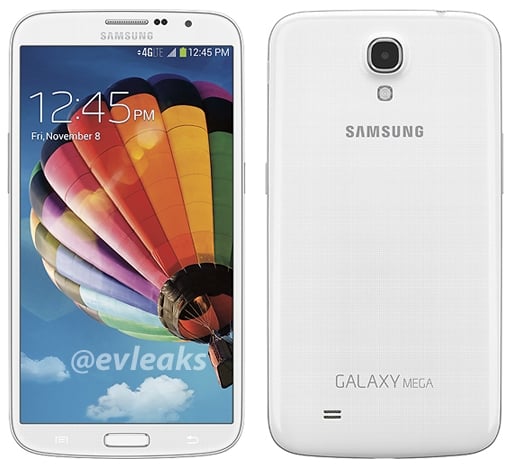 So the Samsung Galaxy Mega 6.3 has already been announced for Sprint. Back in August, Samsung announced it would be coming to AT&T, US Cellular and Sprint. Well both AT&T and US Cellular began selling the device in August, and I actually reviewed the device back in August. Sprint said they'd sell it "later this year" I had almost forgotten that Sprint would be selling it until now. @Evleaks has posted a press render of the Galaxy Mega 6.3 on Sprint. We're expecting it to go for about $149.99 on-contract, since that's about what AT&T is selling it for. As far as specs go we're looking at:

The specs aren't amazing, but then this is supposed to be a mid-range device, which you can tell from the specs above. For the most part it has all the Galaxy S4 features minus things like S Health, and a few other things. Probably because they didn't run well on the Snapdragon 400 and 1.5GB of RAM. Which is fine, in my opinion. I'd rather have a smoother experience than something with a thousand features that I may or may not use.

The Galaxy Mega is Samsung's largest smartphone to date. Although it is not the largest smartphone. Sony still holds that title with the Xperia Z Ultra at 6.44-inches. I'm sure that will change soon enough though.

The Galaxy Mega 6.3 is also supposedly heading to MetroPCS as well. We also say the Galaxy S4 Mini leak out for Sprint and AT&T yesterday and today as well. So we'll be keeping an eye on all the new Samsung devices headed to the US. Hopefully we'll see the Galaxy NX Camera, that's one thing I want to get my hands on.

Would you buy the Galaxy Mega 6.3? Let us know in the comments below.