OLED display information website OLED.at thinks it’s very unlikely that Samsung used the super flexible OLED-based YOUM display that they showed us this year at CES, and that instead it’s normal normal display that is curved into a fixed position, much like we saw in the Galaxy Nexus, two years ago.

One clue that says they aren’t using YOUM is that they would’ve most likely promoted it very heavily by now if that’s what they were using, but they haven’t done that at all so far, and likely never will:

Samsung has ” Youm leave “as a brand for flexible OLEDs protect. In no single press information or data sheet of this name is mentioned. Therefore, we are convinced that this OLED still on a glass substrate is produced. 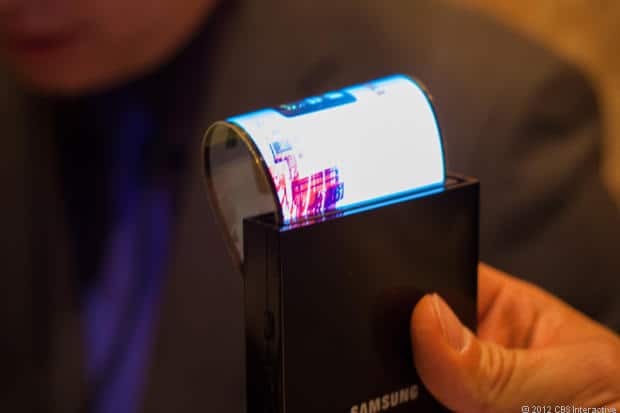 Samsung’s YOUM looked like a very promising technology, not only because we could end up seeing easily bendable displays in all sorts of devices, from smart watches that that could bend around your hand, to virtual reality devices like Oculus Rift, which could have such a bent display in front of your eyes.

I’m not so sure they could benefit smartphones a whole lot, other than perhaps some type of aesthetic look that could be discovered in the future, and people would really like. I would be more interested in the fact that a flexible display, combined with Corning’s Willow Glass, could create the mythical “unbreakable display”.

I could see that becoming a big feature of new devices with the YOUM display, if they advertise it properly, but I don’t see curved phones like Galaxy Round being anything more than a novelty that won’t sell very well. The curved shape doesn’t offer any real advantage, while offering quite a few disadvantages, such as making the phone thicker overall, nullifying the thinness the phone could’ve had if it were flat, and showing you everything as if it were curved, like watching a movie on a curved glass, which could be pretty strange.

So far Samsung has stated that the Galaxy Round is just an experiment, and probably won’t try to advertise it too much other than in a few select markets.