Skip to content
Trusted By Millions
Independent, Expert Android News You Can Trust, Since 2010
Publishing More Android Than Anyone Else
5
Today
153
This Week
839
This Month
6547
This Year
116517
All Time A few years back, who would have ever anticipated that we would be worrying about having Optical Image Stabilization (OIS) on our cellphones – the problem is, they are no longer just a cellphone or mobile phone…they are now called, and rightly so, a smartphone. We expect a lot of our smartphones and each year they get smarter and smarter and we demand more and more of them; especially when it comes to the camera.

Years ago the point-and-shoot cameras were all the rage because for less than $200 you could get very good photographs for the money. When cellphones first had a 1.9MP camera, nobody used them much except to take a photo for their contacts. Things have changed on both fronts – sales of point-and-shoots are down and the smartphone megapixels are up. However, by the very nature of a smartphone, being held with one hand or even trying to steady it with both hands, you are bound to shake a little while you are holding it or pressing the on-screen button. Even when using voice commands, like “cheese” or “smile” to take the picture, you will find it hard to hold it steady. Expensive DSLR cameras have OIS built into the lens to compensate for the inevitable shaking. Several high-end smartphones have incorporated OIS into their devices, but Samsung has been dragging its feet – oh, it is in the Galaxy S4 Zoom, but that is more a camera rather than a smartphone. 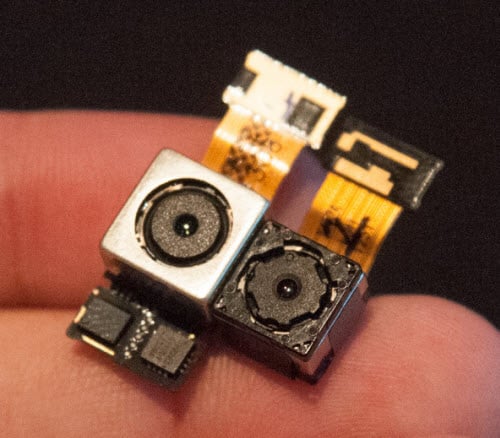 It’s not a matter of physically fitting an OIS camera in the body of the Galaxy S5, the problem goes back to Samsung’s suppliers. With the anticipated sales for this new smartphone, Samsung claims their suppliers will not be able to meet the demand. Knowing that customers are expecting or demanding the OIS feature, Samsung is deciding how they should proceed and one of their options will be to delay the introduction of the Galaxy S5, rather than disappoint customers.

Samsung is working on developing more and more of their components in-house to avoid delays in supplies. The Galaxy Note 3 was supposed to have a fingerprint scanner, but the chip by a third party manufacturer failed to pass the Q&A tests, so they have turned to working on an in-house solution. Samsung wants the OIS camera in the Galaxy S5, it just depends on if they can get enough of a supply to make it happen. Selling 50 million smartphones is great for the bottom line, but remember, you must be able to supply 50 million of everything – cameras included.

Let us know in the comments or on Google+ if not having the OIS camera in the Galaxy S5 would affect your decision to buy it when it comes out.