Skip to content
Trusted By Millions
Independent, Expert Android News You Can Trust, Since 2010
Publishing More Android Than Anyone Else
44
Today
223
This Week
835
This Month
7264
This Year
117221
All Time Samsung debuted their Multi-view feature last year with the Galaxy Note II, and have since brought it to the Galaxy S III.  It also launched with the Galaxy S4, Galaxy Note 10.1 and Galaxy Note 8, and every time it’s been released on a new device Samsung has tweaked it a little bit here, a little bit there, but the design has always stayed basically the same.  Multi-view, for those who haven’t had the pleasure of using it yet, is Samsung’s answer to easily multi-tasking by using 2 apps at the same time.  The screen is split in two, and you can drag any number of compatible apps into either of the two panes.  In the past you could resize these panes to fit your preference, and you could also switch them if you need the one app on the other side.  Samsung has restyled multi-view on the Galaxy Note 3, and they’ve even added more features than before too. 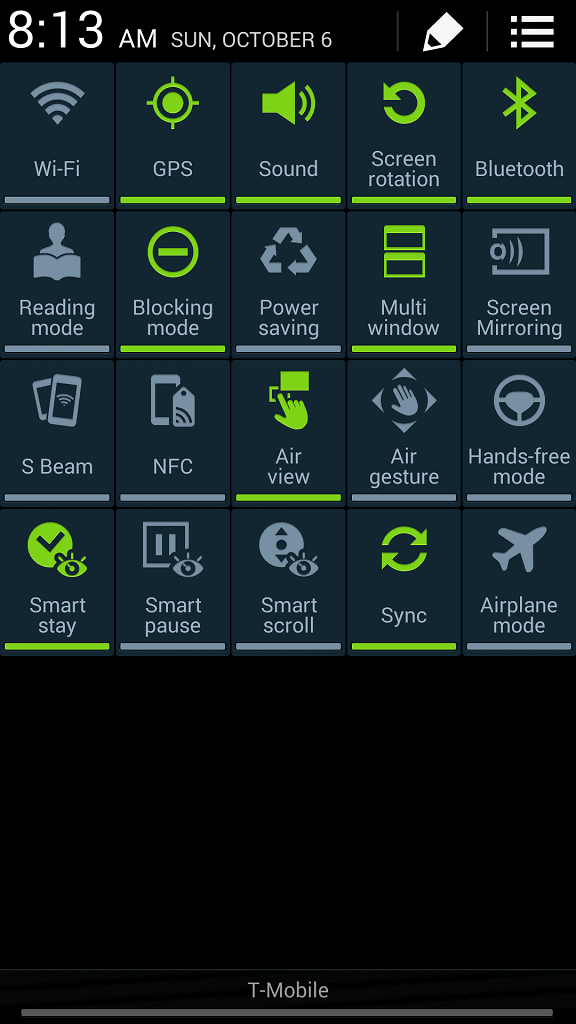 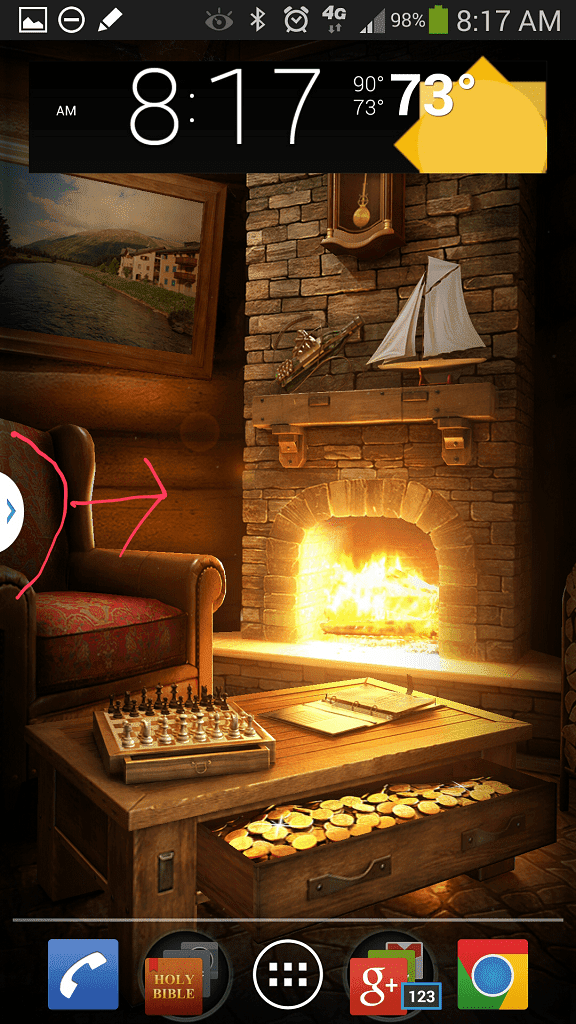 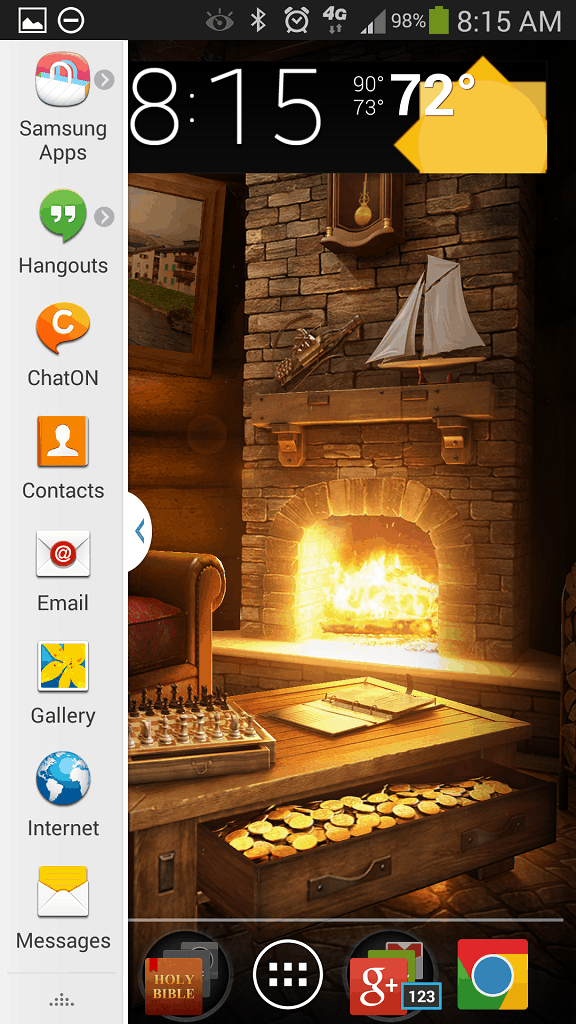 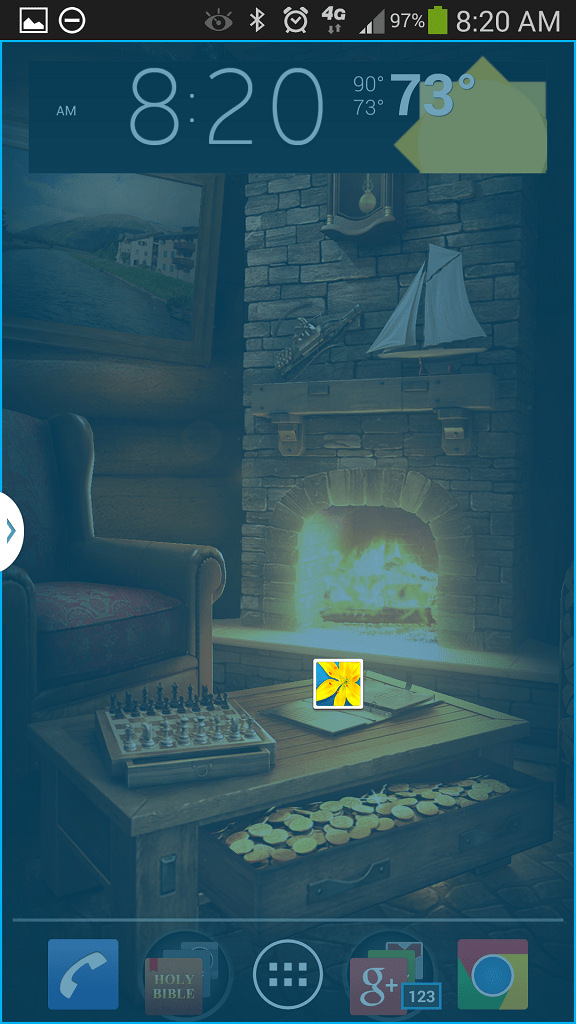 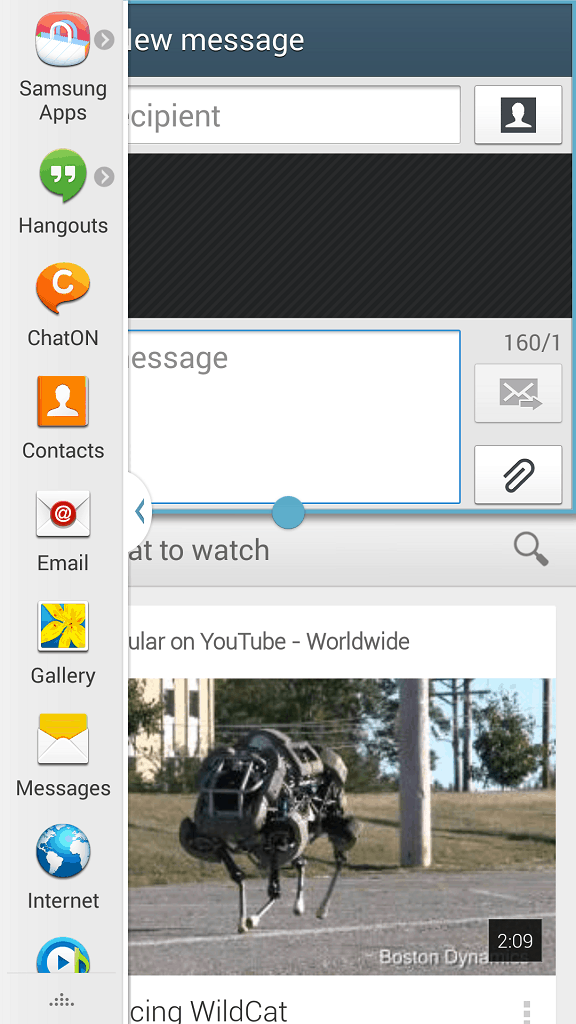 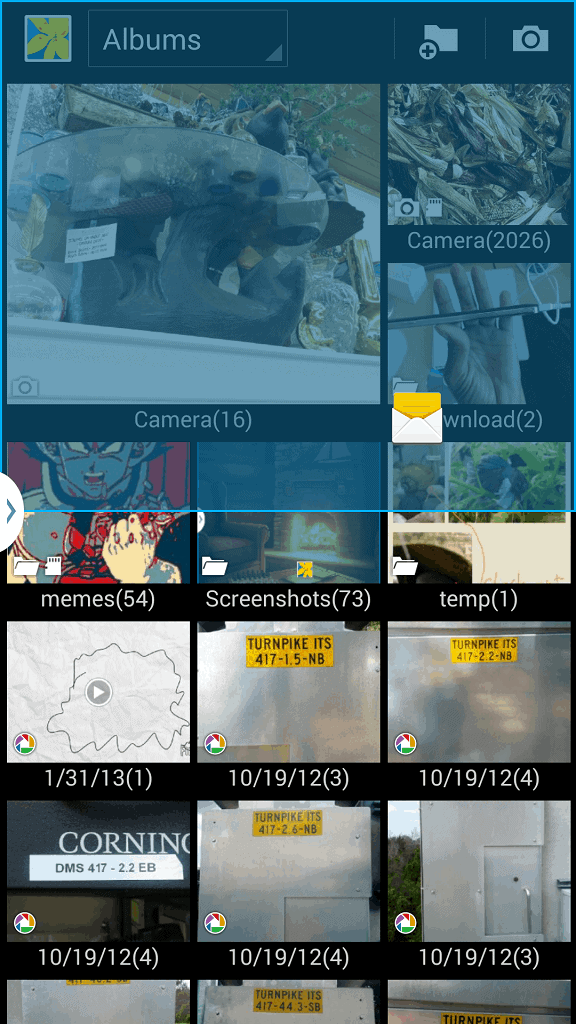 Once the multi-window bar is enabled simply grab the little arrow icon and pull it out to the right as shown in the picture above.  You’ll now have the list of compatible apps that can be used in multi-window mode.  Click and hold on any one of the apps you’d like to use and drag it to the main portion of the screen, and the section you are dragging it into will turn blue.  Once you’ve dropped one app it’ll take up the full screen like normal, but the magic happens when you drag a second one out from the multi-window bar.  When you do you’ll be presented with two blue boxes that split the screen in two.  Drag the app icon to where you want to display the second app and just like magic, your screen is split in two, with one app on bottom and one on top.  If you’d rather have one on the left and one on the right, go ahead and rotate your screen.  I find this easiest when using S-Note with another app that I want to get information from, as I have somewhere to rest my wrist while writing. 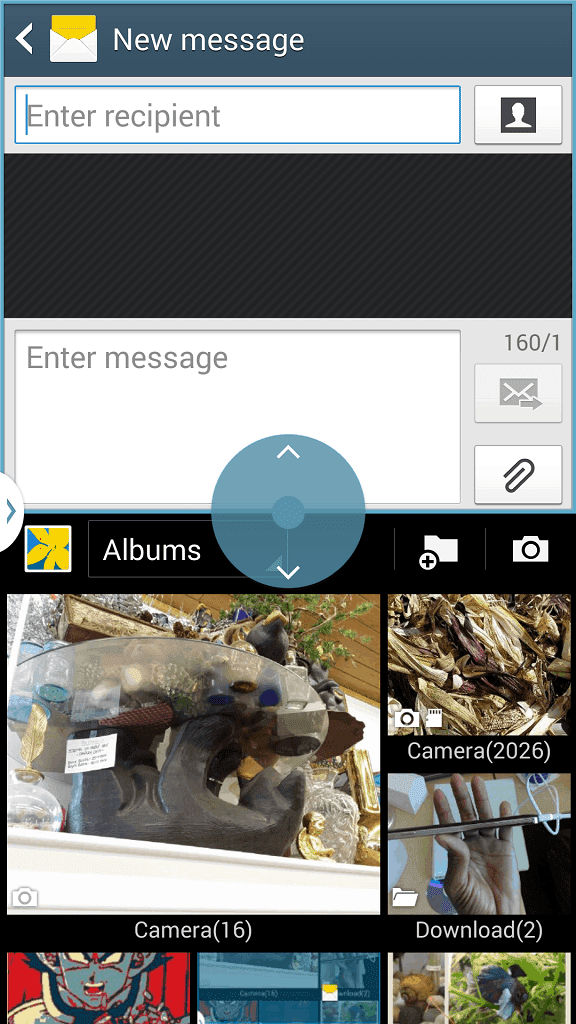 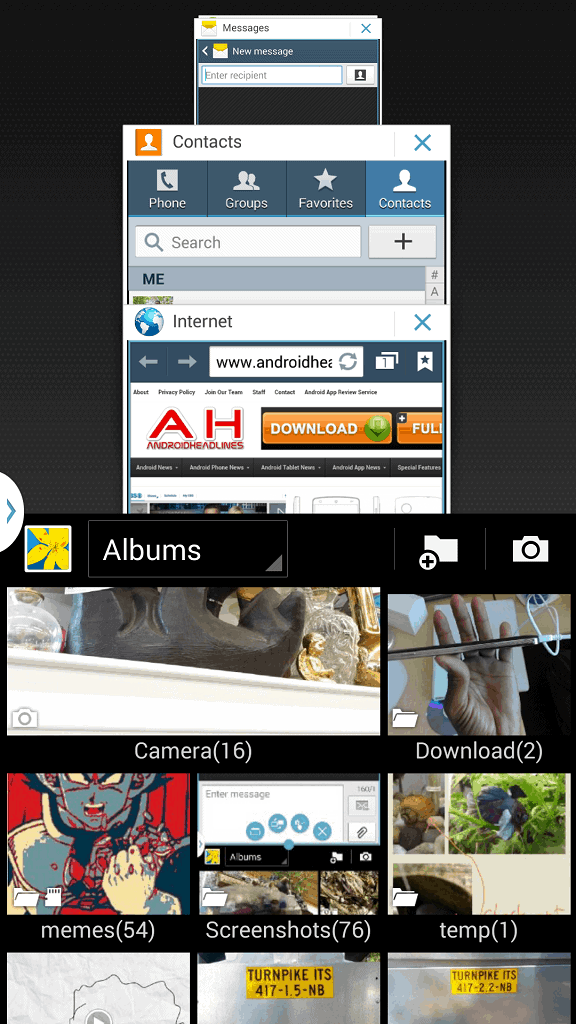 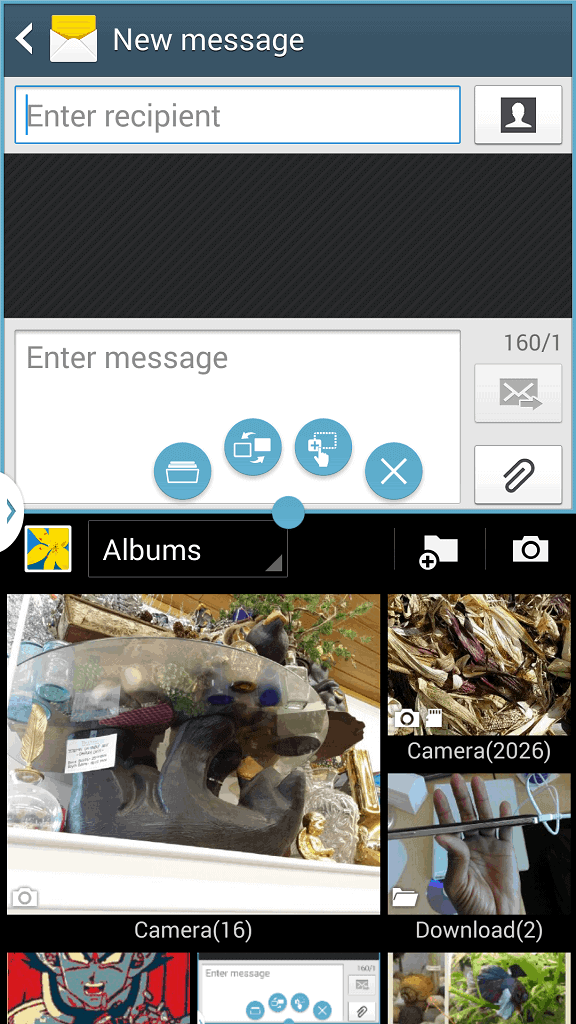 Once you’re using multi-window resizing is as simple as clicking and holding the blue circle that sits in the middle of the screen partition, shown in the screenshots above, which then grows larger and has an up and down arrow on it.  Drag this anywhere you want to resize the window, it’s no more complicated than that.  If you want to perform advanced actions just click on the circle and a half-moon menu will pop-up with 4 new options.  The first one on the left is probably the coolest, and is titled “switch applications.”  This gives you a list of applications recently used with multi-window and lets you switch between them with ease.  Go ahead and click it, you’ll be presented with apps in tabs, much like how Chrome displays different web page tabs.  Clicking any app in the tab carousel will make it the main app used in that section.  You’ll know if an application is running if you see a little arrow next to the icon in the multi-view bar. 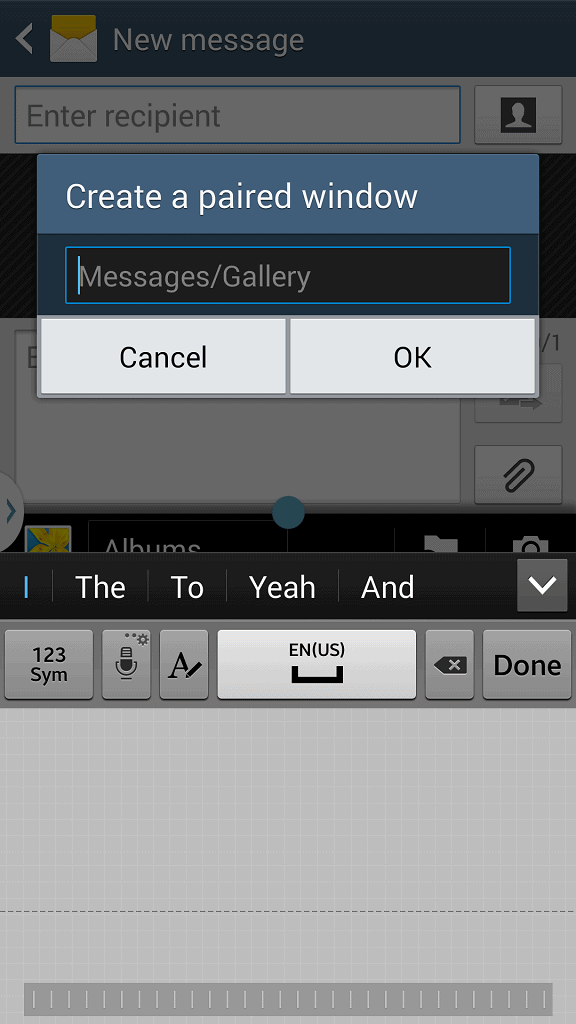 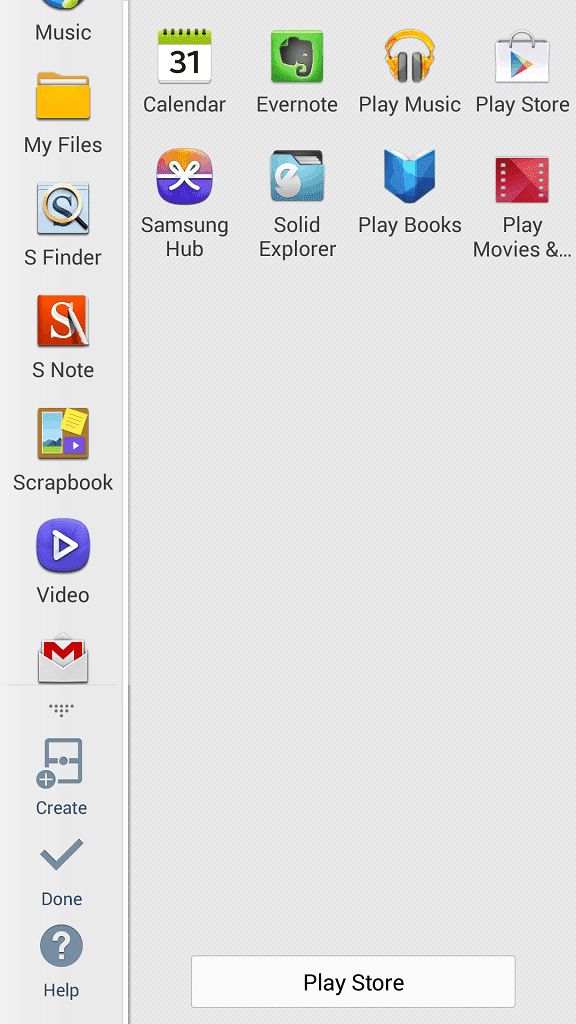 The second button, “switch window,” is pretty self-explanatory, and lets you swap the two running applications with the other.  Again this is useful for something like when you’re writing and are right or left-handed and want the writing section to be where your wrist is so you’re not clicking in the other app all the time.  Button #3 is “drag and drop content,” which is a new feature on the Note 3.  This lets you drag and drop content between apps when the app supports it.  Want to send a picture from a video on YouTube to your friend via a text message?  Instead of having to take a screenshot and crop it, you can just click the “drag and drop content” button, click and hold on the thumbnail of the video and drag it to the opposite window where you’ll have messaging or your app of choice open.  Right now Hangouts doesn’t support this, so until it’s added (or hacked) in you can’t drag information to Hangouts.  Bummer.  Last button is close, which closes the currently highlighted window.  You’ll know if it’s highlighted because the section will have a blue box around it. 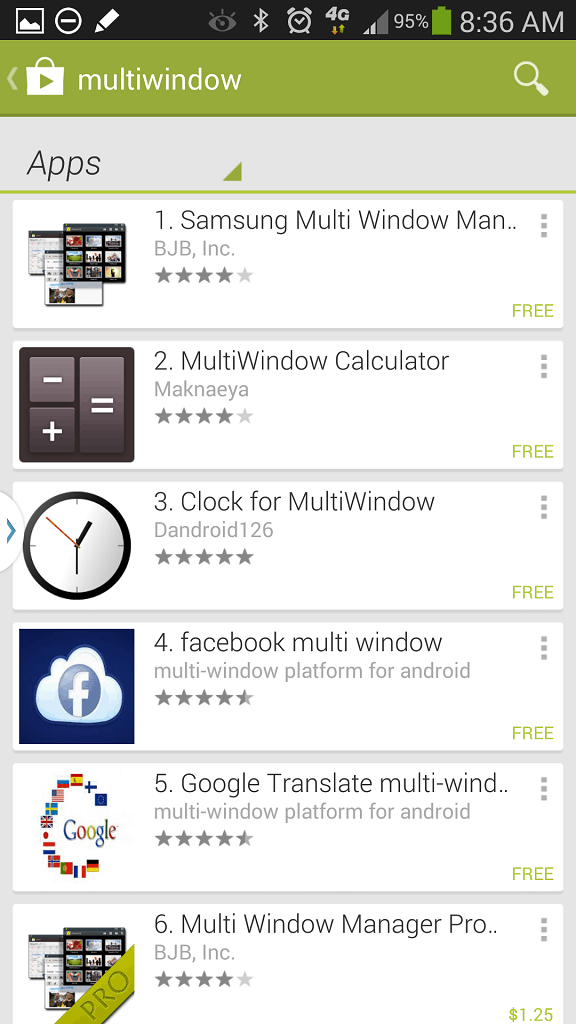 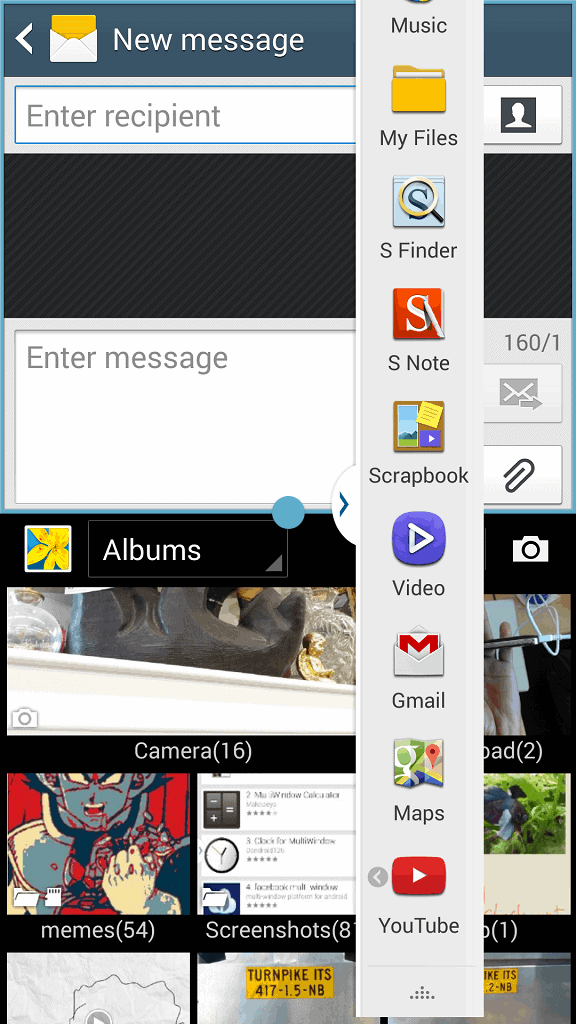 Lastly we’ll be talking about the options in the bottom of the multi-window bar, so go ahead and drag that thing back out from the left side of the screen and look at the bottom, you’ll see an up arrow.  Upon clicking it you’re presented with 3 new buttons, the first of which is create.  This allows you to create a common window pairing, so if you’re constantly taking notes in S-Note and grabbing information from the Internet, go ahead and drag those two out onto your multi-window layout and then click the create button.  This will make it super easy to open this combination since you use it all the time.  The second button is edit, and gives you a list of compatible apps that can be added to the multi-window bar.  Subsequently if there are apps you don’t want in the multi-window bar you can drag them to this section and it’ll remove them.  There’s nothing more annoying than scrolling through a list of apps you don’t use in this mode, so get rid of them and spare yourself.  In the edit window you’ll find a “Play Store” button on the bottom, which will take you to the Google Play Store via a search for “multiwindow.”  This pops up a number of apps that feature multi-window support without having to hack it in, and there are quite a few of them on the Play Store too.

Lastly there’s the help button, which you don’t really need since I’ve already explained everything you can do with multi-window.  Multi-window has been improved quite a bit in this latest version, and it’s even more useful now than ever.  For those of you out there that are XDA-Developers fans, I’ve not seen a hack that’ll give us all the apps on multi-window just yet, but it happened in nearly no time at all with the Note II, so expect that addition any day now.  For everyone else, Samsung has at least built upon the number of apps available for use with multi-window, and hopefully more will continue to pop-up on the Play Store.