Yearly device updates have been the norm since practically forever ago in the world of cell phones, but now that smartphones are increasingly sophisticated that next update means more than ever.This year’s lineup of phones are faster, sleeker and mostly larger than ever, bringing new features, better screens, crisper graphics in games, and an overall better design than last year’s.  One of the biggest differences in this year’s phones are the wide variety of materials being used in them; Motorola likes to use a Kevlar-type material, HTC has moved to all metal, Google seems to be using a rubberized material in the Nexus 5, and Samsung is using faux leather on the back of the Galaxy Note 3.  It’s the difference between last year’s Galaxy Note 2 and this year’s Note 3 that we’ll be looking at today, and what better way to start than looking at the most obvious difference first: the physical aspect. 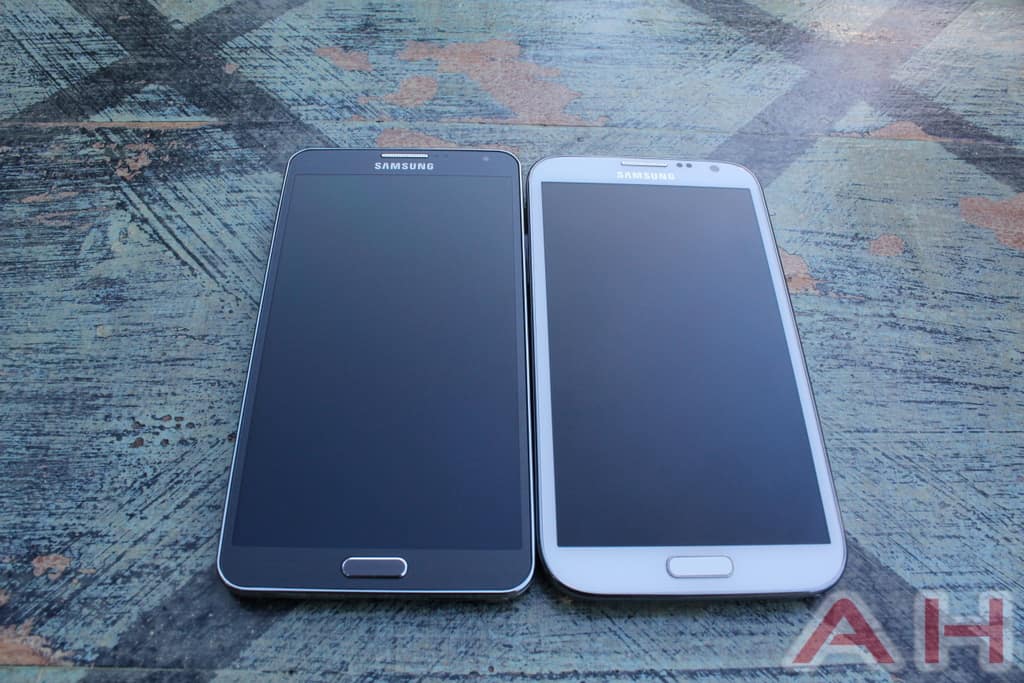 Samsung has made both white and black phones for a while now, and they’ve even added a third option this year; pink.  I’ve not seen the pink one in person, but I imagine it’s probably using a material more like the white Note 3 uses rather than the black one.  That being said I’ve got a white Note 2 and a black Note 3, so it should make spotting the differences between the two rather obvious.  As far as size goes, the difference between the Note 2 and 3 is exactly like the difference between the Galaxy S III and S4.  The Note 3 is a hair taller than the Note 2 by .1 millimeters, and while this isn’t obvious when holding both in the hand, it’s a little more clear when you put them next to eachother.  You’ll find though that the Note 2 is actually 1.2 millimeters wider than the Note 3, making that larger screen and thinner bezel even more impressive.  It also means the Note 3 is slightly more comfortable in the hand.

The Note 3 is also 1.1mm thinner than the Note 2, which continues to add to the comfort.  Being 15 grams lighter (half an ounce) lighter also means you won’t feel this thing in your pocket.  It’s crazy light, but somehow the construction of the Note 3 makes it feel more solid than the Note 2’s.  One big design change coming from last year’s Samsung devices is that the Note 3 doesn’t feel like one big piece of plastic.  The Note 2 and Galaxy S III had an interesting design in that all the edges were flush with each other and they both felt like a smooth pebble, which is actually what Samsung was going for.  This time around with the Note 3, Samsung put a distinctive raised bezel that has a tiny lip protruding above the screen, giving you maybe less than a millimeter gap between the phone and whatever surface it’s on if you lay it face down.

The trim around the edge of the phone is completely different too.  While the Note 2 had a smooth, chrome trim, the Note 3 has a 5-line edged trim that gives it a more industrial feel.  To me this design makes the device look more like a professional tool than a toy.  The Note 3 is also much more square than the Note 2, making the Note 2 look a little bloated when it’s beside the 3.  The volume rocker has been moved up near the top of the phone more, and is considerably easier to press when on the phone.  I always found myself hunting for the Note 2’s volume rocker because of its odd placement, whereas you know this one is always near the top.

The power button has received the same treatment, but wasn’t moved up quite as much.  The bottom is where the biggest difference between the sides of the two phones can be found, and it’s because Samsung has both included a new USB 3.0 charging port on the Note 3 and it has moved the external speaker to the bottom.  The regular microUSB port is still there, just a little off centered, so the phone should still works with all the docks out there.  It still fits perfectly in my Samsung desktop dock, but it sits just a little off-center like the port is.  The lower external speaker is a huge difference, and it brings much better acoustics to the table than the Note 2 had.  The speaker also seems to be a higher quality one and doesn’t vibrate as much.

The home button feels different this time around too.  Where the Note 2 had a soft press home button that made almost no sound at all, the Note 3 has an audible click to it, and takes a little more effort to press.  Don’t think this is a bad thing, it’s just a design change.  You may like it or you may not.  The button is also definitely easier to press when using the S-Pen as it seems to have a different finish on the surface. 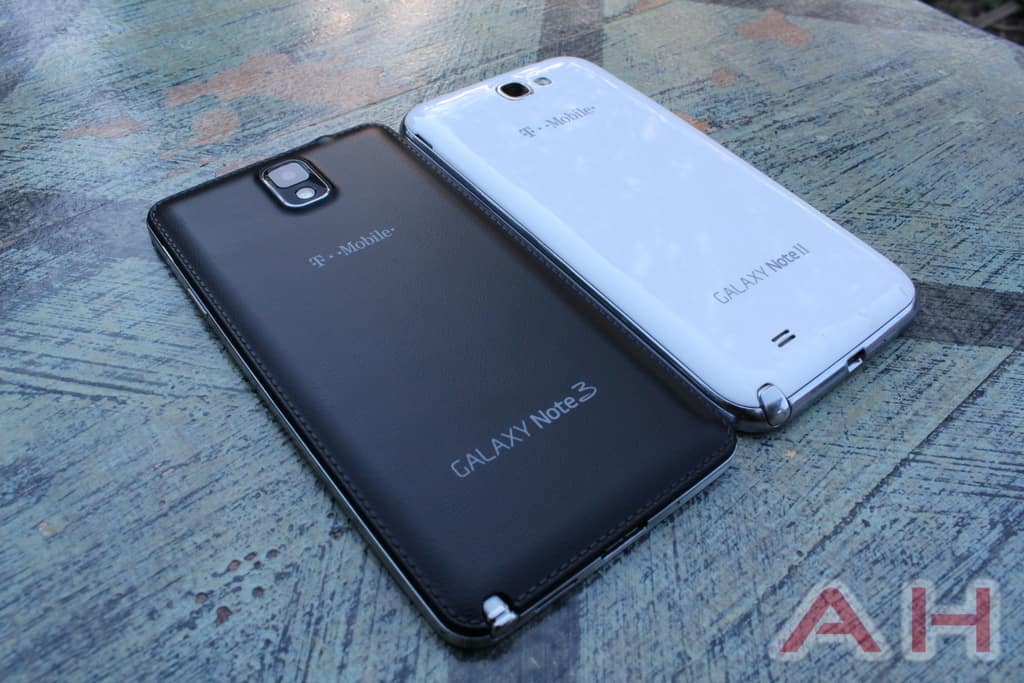 The back of the phones brings about the biggest difference of all, what with Samsung changing from the shiny plastic they’ve used on their phones since the Galaxy S III, to a faux leather like material.  Again going back to design, the Note 2 and S III are supposed to feel like a smooth pebble in the hand, and the shiny, slippery plastic just fits in with that design.  I personally hated the smooth slippery plastic, especially when the temperature outside would drop anywhere below 70 degrees Fahrenheit, as the phone would become increasingly easy to drop as humidity kept it from sticking to your hand.  The Note 3 exhibits none of these problems, as the new faux leather back now has a rubbery feel, keeping it from slipping out of your hands as easily.  I’ve heard many people complain about the faux leather “still being plastic,” and I honestly wonder if these people even know what faux leather is.  Pleather is another term for it, and it’s simply a leather-like material made out of plastic, but when it all comes down to it, most of the stuff we use in everyday life is plastic.  With that being said, the back of the Note 3 is incredibly impressive looking and feeling, and it piles on top of all the other design changes to make this thing look like an incredibly sleek, professional device. 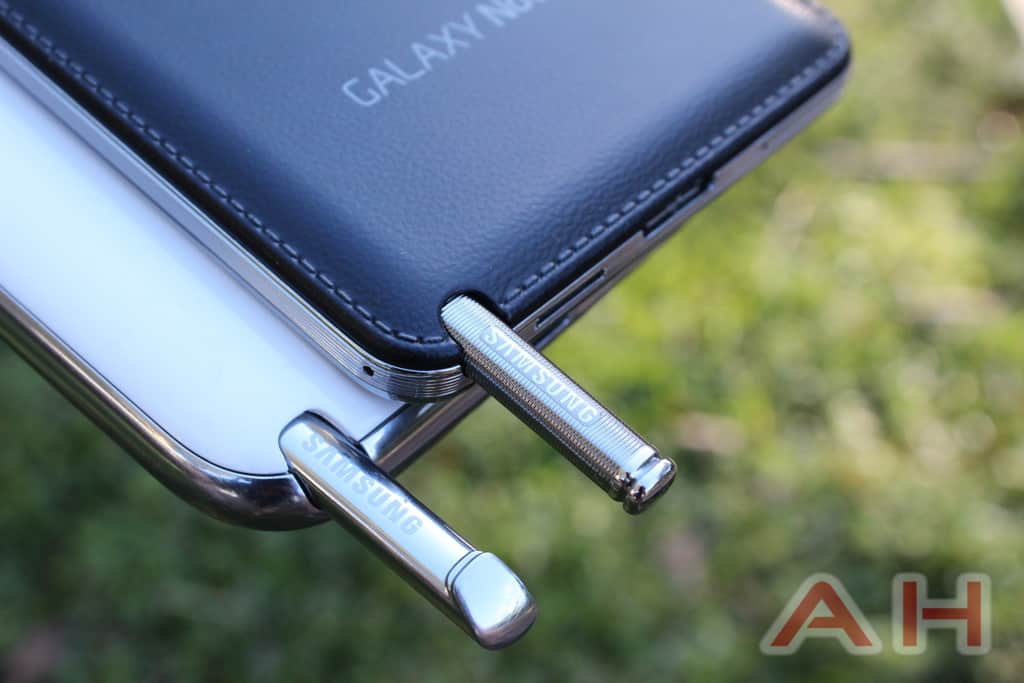 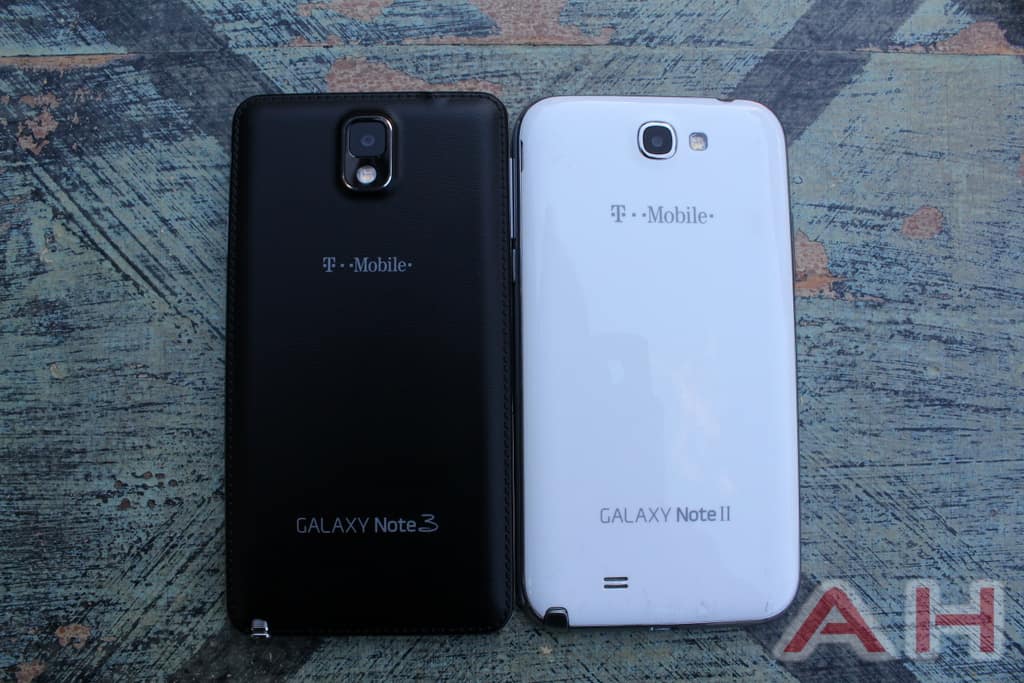 And that’s it for the physical differences between the two phones.  Look for more comparison articles very soon breaking down other areas of difference between these two behemoths of mobile technology.  If you haven’t seen our full Galaxy Note 3 review, you might want to check that out in the mean time.