So, the 7-inch, 8-inch and 10.1-inch tablet markets are fairly crowded, with innumerable brands duking it out for market share, even the supermarkets are releasing their own tablets now. If you were a tech behemoth looking to expand your range of tablets, what would you do? Would you release a new model in an existing segment and run the risk of it cannibalizing sales of your existing models and hope the shareholders don’t notice? Digitimes has suggested that Samsung Electronics and Apple have chosen another route, which involves releasing a larger Galaxy Note tablet and iPad, respectively.

According to the latest rumors, Apple is collaborating with Quanta Computer on the 12-12.9 inch iPad, with Apple’s 64-bit A7 processor being used to drive performance of the tablet. The screen resolution is alleged to be 2,732 x 1,536. The name Quanta may sound a little familiar for good reason. Quanta has been involved with developing and manufacturing the Amazon Kindle tablet range, as well as manufacturing the Nexus 7 for ASUS.

Well, that’s more than enough time spent talking about the competition. It’s nice to see what they are doing, but let’s get to more interesting and relevant news. Which in this case, looks to be the possible release of the Samsung Galaxy Note 12.2. 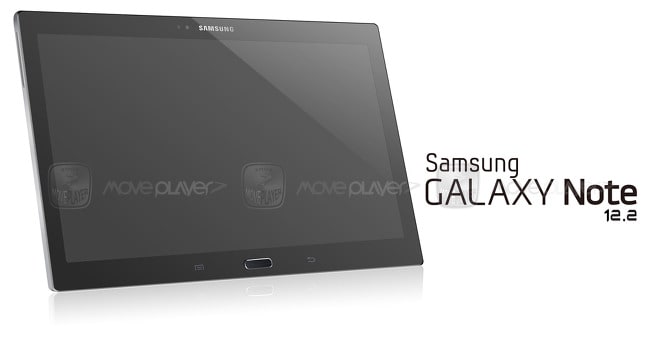 The Note 12.2 follows the same design language as other Samsung tablets by incorporating a physical Home button, with the Menu and Back buttons situated to either side, as pictured above in the leaked picture from moveplayer.net.

Whilst Apple are collaborating with Quanta, Samsung is naturally developing the Galaxy Note 12.2 entirely in-house. Apparently Samsung were initially hoping that Google would partner with them, as they did with the Nexus 10, but it would seem that Google have been concentrating on the 7 and 10 inch markets, with the release of the 2013 Nexus and the much rumored Nexus 10 replacement to be built by Asus.

According to a listing on the Bluetooth authentication website, the Note 12.2 has been allocated the following model ID: SM-P901, which should be the WiFi only model, if past models ID’s are anything to go by. 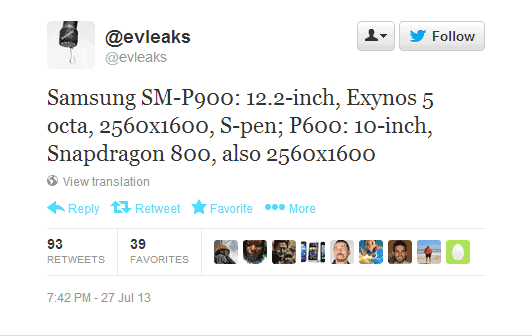 The Galaxy Note 12.2’s specifications were previously leaked by renowned leaker @evleaks, who has a pretty good record in leaking device details that are later confirmed when the device is officially announced. So, a rumor from @evleaks should only involve a tiny pinch of salt. Because there is always the chance that a manufacturer could change specifications before production begins. A 10-inch device with the P600 moniker was also mentioned, sporting high-end specifications.

Sources say that Samsung and Apple are developing the 12-inch tablets mainly in response to PC sales dipping, and also to shore up notebook sales, which have seen tablets eat into their market share.

In a move that mirrors the smartphone’s screen increasing in size, year after year, 2 major tech players apparently have plans to release 12-inch tablets. Is this going too big? Is the release of such monster-sized tablets going to see users crippled with Repetitive Strain Injury? Or is it the natural progression of things? And are we going to see even bigger tablets being released in the future? Are we getting to the time when we will be able to fold up up our 21 inch tablet display and stow them away in our backpacks or even front trouser pockets? Don’t forget to let us know what your favored screen size is in the comments or via our Google Plus page.