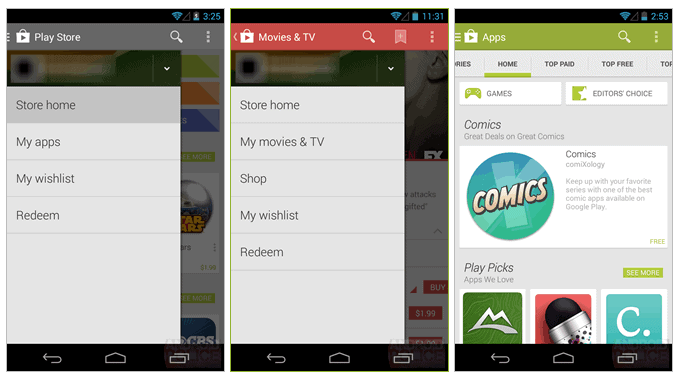 It looks like the slide-out drawer gets rid of the My Apps, My Wishlist and Redeem options from the action bar. The action bar is still there, but only has the Settings and Help options in version 4.4 of the Play Store. To be clear we are looking at version 4.4 of the Play Store and not Android 4.4. Kind of interesting to see them both getting to be the same version number at about the same time. 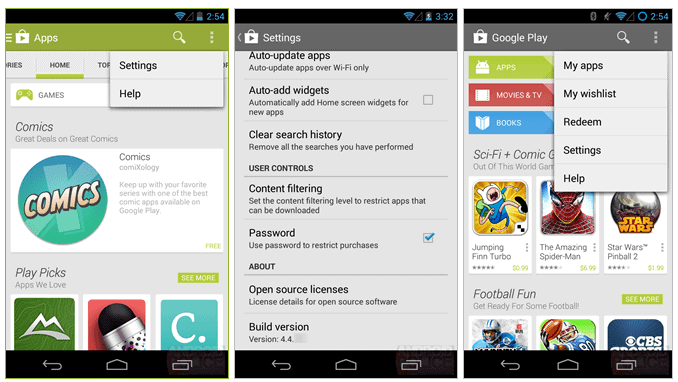 Inside the slide-out navigation drawer there is the My apps, My Movies, My Music, My Movies & TV, My Books or My Magazines, depending on which section of the Play Store you're in. There also appears to be some Google+ integration at the top of the slide-out drawer. At the top which is blurred out, it looks like there's a profile picture with your name and information. That right there is speculation on my part as I don't know for sure since it is blurred out. But that would be kind of cool. Sort of similar to what the PayPal app has right now.

Android Police also says that Google will be looking to change everything to be more card like. That's cool in my book. I personally, love the card UI and can't wait to see it in even more apps. We may not see this version until KitKat is announced or released, but at this point, who knows.