This evening Android Police is reporting on another rumor about Android 4.4 KitKat. This time it has to do with Location settings in Android 4.4. Basically it’s going to be revamped in KitKat, which could be announced next week.

Basically the location access screen in Android 4.4 is getting revamped and will be called Location. The location toggle has also move up from the area that used to be called Access to my Location to the top right corner, which is pretty nice. There are supposedly two location sources checkboxes which used to be GPS satellites and WiFi & mobile network location are gone and replaced by an entirely separate screen, which is called Location mode. There are three location modes in Android 4.4:

Additionally there are recent location requests, which will show a history of recent location requests. Both of these features are OS components instead of Apps, so that means you’ll need Android 4.4 to get these changes. This could cause more battery draining, especially if it’s using GPS more often. As Android Police reports, and I agree, hopefully it’ll be able to be debugged quickly to see how GPS is draining your battery. Which is definitely something we can all get behind. 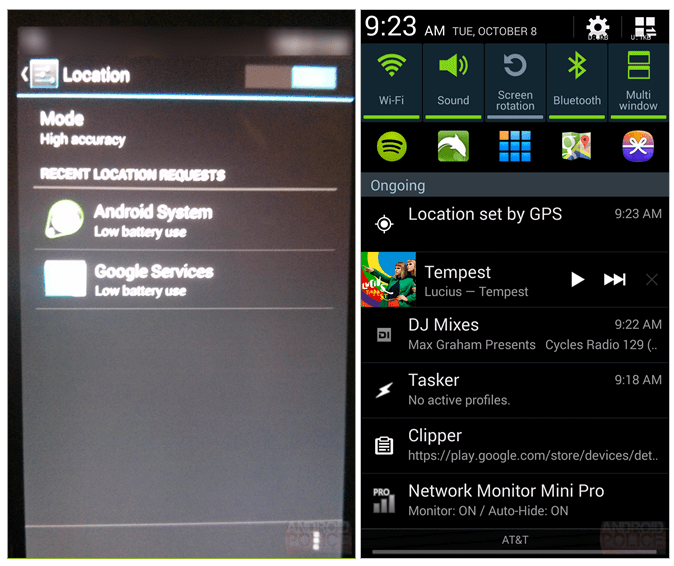 There are some screens above that show Android 4.4 vs Android 4.3 to show you what we are talking about. I’d expect this to be part of Android 4.4 when that gets announced. Since this isn’t part of Google Play Services…yet. We are expecting Android 4.4 – KitKat along with the Nexus 5 and Nexus 10 to be announced next week. Although Google hasn’t yet sent out invites so it’s not confirmed yet. But you probably remember that Google usually sends out invites just days before their event. So I wouldn’t quite rule it out yet.

How many of you are excite about Android 4.4 KitKat? Let us know in the comments below.