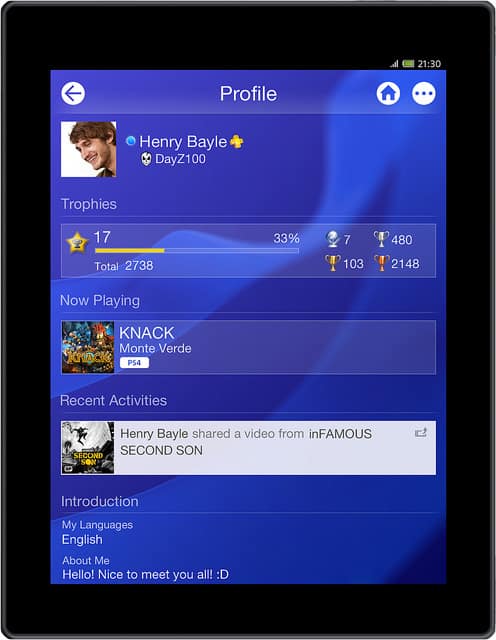 With the PS4 Sony is really building up its online network, and it's got a brand new app for Android to show that progress.  The Playstation app, which is scheduled to launch alongside the Playstation 4 this November, will give you a second screen for your PS4 and do things that you could never do on a Playstation system before.  Usually when you think of a companion app such as the Playstation App, you're more likely to think an extension of the web store, maybe a chat feature and the ability to browse some information about your use profile on the system.  You'd be right if you did too, because the Playstation App will bring all of this to your Android powered phone or tablet.  In addition to this you'll be able to check out your friends trophies and compare them to your own, so you know which high score you're got to beat when you get back home, and you'll even be able to watch the gameplay they record straight through the app so you know exactly what they might have missed in the game.  What's really cool about the chat system is that Sony isn't making it text only this time.  You'll be able to send voice messages through the Playstation App to your friends alongside plain text ones of course, and you'll also receive gameplay invites from friends via the app too.  If you're familiar with the PS4's user interface you'll likely feel right at home with the app, as the design perfectly mirrors that experience.

Besides the obvious functionality that one would expect to be included in such a companion app, the Playstation App will also provide users with a second screen for their PS4.  This changes depending on how the game is written and what it takes advantage of, but it could be anything as simple as a map or inventory management screen, or it can even double as a controller if the game supports it.  While you'll likely not want to play every game this way, it's awesome to have options.  During the Tokyo Game Show last month, Sony Computer Entertainment Worldwide Studios President Shuhei Yoshida showed off the Playstation App and demoed this exact functionality.  During a round of The Playroom, Yoshida drew a picture of the character Knack on the Xperia Z1's screen and then pushed it to the PS4, giving the characters in-game something new to play with.  This kind of second screen experience is being said to be used in upcoming PS4 games like Watch Dogs and Battlefield 4, among others.  Since this can be used as an extended arm of the system, developers can leverage the app to do nearly anything they want.  This keeps users from having to download some other app to use for a game that supports a connection between devices, and it gives developers plenty of flexibility when designing games and apps.