Skip to content
Trusted By Millions
Independent, Expert Android News You Can Trust, Since 2010
Publishing More Android Than Anyone Else
1
Today
203
This Week
48
This Month
7424
This Year
117379
All Time Over the years Samsung has become well known for their better than average smartphone cameras. The Galaxy S II was probably the first really good camera on an Android phone, and since then things have gotten even better. The Galaxy Note 3 ships with the same 13 megapixel camera that the Galaxy S4 ships with, so if you’ve used the Galaxy S4 you’ll know what to expect here. Samsung has also carried the revamped interface from the Galaxy S4’s camera to the Note 3 as well, and even included more features. Right off the top there are two new shooting modes: Surround Shot and Golf Shot. Outside of that the Galaxy Note 3 supports Ultra HD 4K recording, which is 4 times the resolution of 1080p. Obviously you’re not going to see a massive difference between 1080p and 4K videos on your home TV, since that’s likely a 1080p set, but know that in a few years if you go back and watch the videos taken with the Galaxy Note 3 on your 4K TV they’ll look way better than videos recorded at 1080p. Since we already covered quite a bit of the camera in our Galaxy S4 Review, let’s take a look at what’s different with the Galaxy Note 3.

First up is Surround Shot, which is Samsung’s take on Google’s Photosphere. If you aren’t familiar with Photosphere, Google introduced it with Android 4.2 last November, and it’s a way to take a complete 360-degree photo of where you’re standing. Photosphere uses the same technology to stitch together multiple shots to create a 360-degree panorama that Google Maps uses. Surround Shot adds a few little features that Photosphere doesn’t have, including an easier way to tell which sections of the picture you haven’t taken yet (bottom left of the screen), and it seems to take a little more care to calibrate the sensors in the phone to more properly align the segments of the picture seamlessly together. Other than that it’s basically the same thing, and it’s really great to see another OEM, especially one as big as Samsung, get users on the Photosphere train. It even works seamlessly with Photosphere, which you can check out on one that I’ve posted to Google+.

Samsung also added a “tap to take pics” option in the settings menu. This gives you a Moto X-like ability to press anywhere to focus, and when you lift your finger the photo is taken. Personally I found this mode useless since the camera doesn’t always focus on exactly what you want, then you end up with another picture-taking up space on your phone. Options are always good though, and there’s likely to be plenty of people who love this feature.  Samsung has also added smart stabilization to the photo taking mode, which acts of a software stabilizer. Essentially it seems to work a lot like HDR in that it takes more than one picture in a split second and seams them together to make one better looking picture. Unlike the G2’s on-the-fly Optical Image Stabilization, however, every picture requires a bit of processing time after taking it. While this is nice in some situations, the 1-2 second pause after taking pictures very quickly gets annoying. 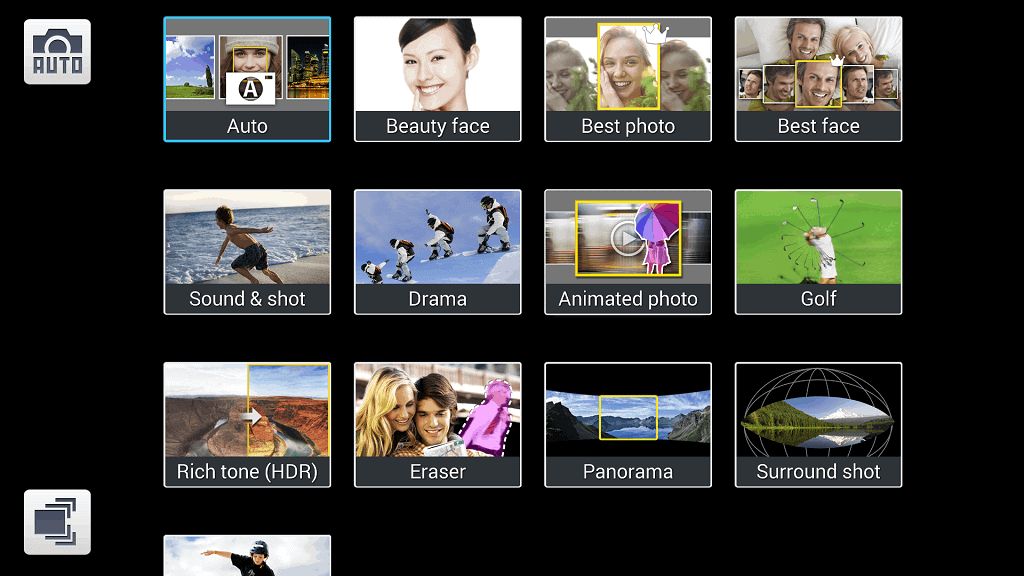 Golf shot brings a rather interesting mode to the already huge mix of modes on the latest Samsung camera software, and it’s really only good for one thing; analyzing a golf swing. If you tend to golf a lot this might come in handy for correcting any problems you might run into. The camera uses the new smooth motion video to analyze the golf swing, and takes still frames from the video to splice together one full shot.

Speaking of smooth motion video, this is a new feature on the Note 3, and it allows you to record 60 frames-per-second video. If you’ve ever used this feature on an HTC One, or even seen The Hobbit in high framerate, you’ll know exactly how the feature works and looks. It seems to make some people sick, so your mileage may vary, but overall it’s a pretty sweet feature. It’ll definitely make taking video at sporting events or other fast-paced things pretty amazing.  4K video recording is probably the biggest feature Samsung has added to the Note 3’s camera, and whether or not you find any use out of it depends entirely on how much of a videophile you are. Personally I’m looking forward to recording more 4K video so I can enjoy it years down the road when 4K TVs are within a reasonable price range. There’s nothing like going back to old videos and cringing at the quality, and thankfully you won’t be doing that here. Samsung’s optics are clearer than ever, and the 4K video still looks sharper on a 1080p display than a native 1080p video does. This is due to a process called downsampling where more pixels are fit into a smaller space, inherently making the picture look sharper than normal. Now keep in mind since 4K video is 4 times the resolution of 1080p, files quickly become very large. The Galaxy Note 3 has an arbitrary 5 minute time limit on 4K videos because of this, making 5 minute video files somewhere around the 1.5GB mark. Check out a 10 second long, full quality 4K sample vs a 1080p sample if you’re interested in seeing the difference.  Be sure to download those rather than trying to stream them through Drive, as streaming will only display the video in 1080p.

Samsung has also included a new “audio zoom” mode in the video camera options, allowing you to zoom in on a subject and theoretically hear them better. I’m not entirely sure how this works, but it’s not a bad effect, and might help if you’re trying to record a video in a crowded area with lots of noise. Outside of that you can expect the same great pictures and video taken on an improved software base from the Galaxy S4. It’s likely not a big upgrade from the S4’s camera, but it’s definitely a big improvement from the Note 2’s camera, which says quite a bit given the excellent quality of that one. The only weird thing that’s still missing is a forced Macro mode, which Samsung phones coming from the Note 2 and earlier all had. This makes taking close shots a little more difficult, although the auto algorithm is way better at figuring out what you’re actually trying to focus on than ever before. Still I’d like to see Samsung add this in the future, it’s something I used often and I’ll miss it for sure.