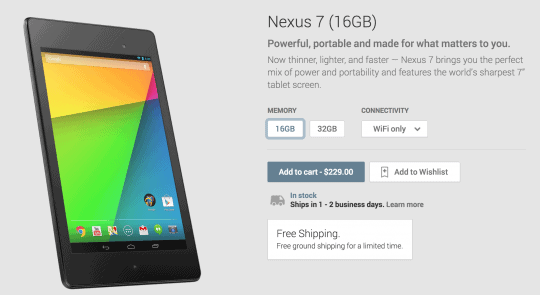 This evening, Google rolled out a very minor redesign to the Nexus 7 page on the Play Store. In fact it's so minor that many people probably didn't even notice the change. Before we had to choose the storage and connectivity via thumbnails at below the hero image. Now you can select 16GB or 32GB then WiFi or LTE above the "Add to Cart" button. It's not a drastic change, but definitely a change. And it could signal a design shift on the Play Store. It'd be nice to see this make it's way to the Nexus 5 and 10 when they launch…soon.

This change makes it a lot more user friendly, which is something we can all get behind, I think. In the connectivity dropdown you've got WiFi only, LTE AT&T, LTE T-Mobile and LTE Verizon. Which might be to avoid confusion, instead of just having an unlocked Nexus 7 LTE on the Play Store. Listing them as individual versions for each carrier might be better. But then again, the Nexus 7 LTE on Verizon can't connect as a new device, as far as I know, since we've heard nothing about the certification being complete yet.

What's also interesting about this change, is that this isn't on any other page. It wasn't changed on the Nexus 4 or Nexus 10 page. Which is probably because those pages will be changing in the next couple of days to the Nexus 5 and new Nexus 10. Or at least we hope so. We also hope that these changes make their way to those pages as well. It would make them much easier to navigate, as well as adding those changes to the Chromebooks in the Play Store as well.

So nothing too big here, just some minor interface changes on the Nexus 7 page on Google Play. It definitely looks nicer to me, what about the rest of you? Let us know in the comments below.