Skip to content
Trusted By Millions
Independent, Expert Android News You Can Trust, Since 2010
Publishing More Android Than Anyone Else
44
Today
142
This Week
697
This Month
4543
This Year
122121
All Time By now we must be dreaming about the Nexus 5 with all of the exposure it has been given now for months, but wait, we have another story to share.  One of my favorite case-makers, Spigen, tweeted the above, showing the back of the Nexus 5 in all of its glory in one of their Spigen Cases.  We get to see the large camera area with the single LED Flash, the volume rocker on the side, as well as the placement of the headset jack on the top of the phone – things we have seen already, sans the beautiful case.

Right now, the Nexus 5 has been totally exposed from top to bottom – even the user’s manual was leaked for all to see – at least temporarily, before the link was taken down, but not before we gathered all of the facts, ha! The specifications are no longer speculation, but fact: 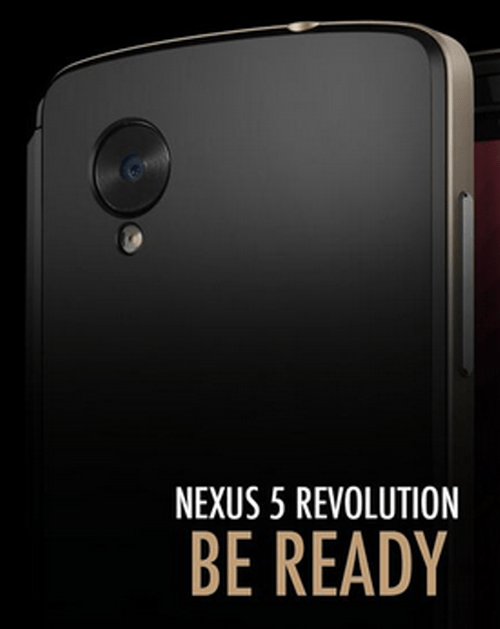 However, rumor is that you’ll be able to get a 32GB model with a 3,000mAh battery for only $399…the pricing is always a high spot for the Nexus model smartphone, but the area of most disappointment is always the battery capacity. Last year’s Nexus only had a 2,100mAh battery, so they upped the base model a bit, but not much. It would be worth it to pay the extra $100 and get the 32GB of Storage (which should be the minimum anyway) and the 3,000mAh battery.

It should not be too much longer before we see the Nexus 5 go on sale, live on the web, where it seems there has been a growing desire building up for this smartphone that comes with the new barebones Android 4.4 KitKat, which is one of the most exciting things about the new Nexus devices.  As soon as we see the Nexus 5 go live, we will let you know.