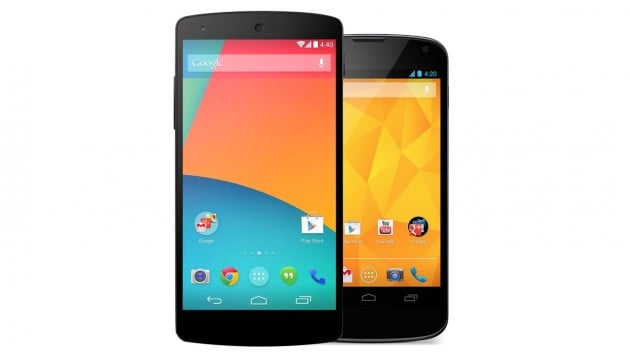 After weeks and months of rumors and leaks, LG and Google have finally released the Nexus 5. Google announced it today. It’s available in the Play Store right now, but that may not be for long. Stock on these new Nexus devices usually sells out pretty quickly. Its predecessor, the Nexus 4, is still a good Android phone. Should you upgrade to the Nexus 5? If you’re a hardcore tech geek, the answer is probably yes. But you should still know what you are getting in to. Before you make a decision to purchase a Nexus 5, take a look at the comparison we have put together and see if the upgrade is worth it to you.

The 16 GB Nexus 5 and Nexus 4 are both the same price, so that comparison is kind of a no-brainer. The rear camera on the Nexus 5 adds Optical Image Stabilization, and the battery gets a slight increase up to 2300 mAh. The screen is slightly bigger too. The biggest spec bump comes in the processor. The Nexus 5 runs on a Snapdragon 800 SoC, while the Nexus 4 is powered by the older Snapdragon S4 Pro.

Any way you look at it, the Nexus 5 is a good upgrade from the Nexus 4. Every major carrier in the U.S. should be selling the smartphone in the upcoming weeks. All of them except Verizon, that is. There’s also some new accessories available, including a new wireless charging pad for the Nexus 5 and Nexus 7. I will for sure be buying a Nexus 5 and selling my Nexus 4 soon. How about you?