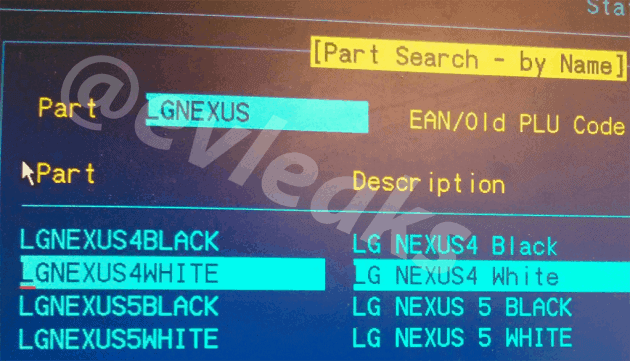 Here's another Nexus 5 leak to get you excited. It appears that our favorite tipster, @evleaks has dropped another leaked image, this is from an internal system at some "big box retailer", he didn't mention which retailer though. Although we know it's not Carphone Warehouse as their UI on their internal system is a bit different, as shown in our last post.

According to the image above that @evleaks tweeted out, it looks like, at least this retailer, will be selling the Nexus 4 in black and white alongside the Nexus 5 in black and white. Now what's strange about this is the fact that Google has already sold out of both of them and have said they have no plans on restocking. But on the other hand, I'd love to see them both sold together. That would mean the Nexus 4 would probably be sold at $199/249 and the Nexus 5 at $349/399. Which is crazy. Even though the Nexus 4 is a year old, it's still an amazing device. Now it doesn't have LTE, officially, but it's still a great device that can't be beat for $199 off contract.

Perhaps Google is making another batch of Nexus 4's to go on sale with the Nexus 5 launch soon? It would be cool to have both on sale, as they'd probably sell more, especially hitting even more price points. Maybe that's why Google hasn't completely gotten rid of the Nexus 4 listing on the Google Play Store yet? Who knows. I'd actually expect the Nexus 4 to drop in price a little more. Maybe a $149 price tag for the 8GB and a $199 for the 16GB? That would be an absolute steal! I'd consider picking up a few at that price.

So a Nexus 4 and Nexus being sold along with the Nexus 7 and Nexus 10's? It sounds good to me. Not everyone wants or needs the latest and greatest, and at under $200, it's kinda hard to pass up the Nexus 4.