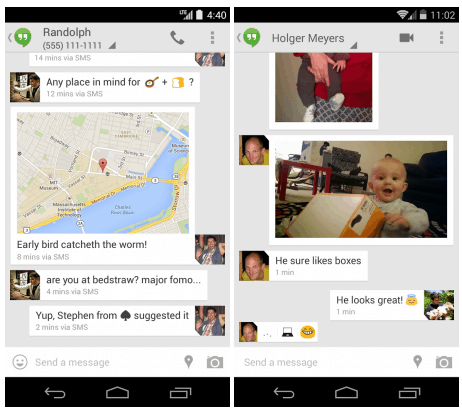 So, you know that Google+ event on Tuesday, where the Google+ team announced the new version of Hangouts complete with SMS integration? Yeah, we've all been waiting patiently for the APK. Although it's not rolling out just yet. But it is preinstalled on the Nexus 5 so those of you that purchased a Nexus 5 today, you'll get the SMS integration, Status and new sharing options before the rest of us. The rest of us will have to wait until the "coming weeks". Hopefully it's not too long before we get the update, I'm really excited for SMS integration.

With the update, you'll also be able to send animated GIFs in hangouts, including Auto Awesome animated photos that were made through Google+. You can also now set your own status indicator about what device you're currently using, whether you're in a call or not, and what your mood is.

Additionally, there are some other updates to Hangouts. There are some subtle improvements to how Hangouts works, according to Google. This includes the ability to share photos from Google Drive, faster ways to start chats and under-the-hood- performance jumps as well. As expected, the Nexus 5 will be the first device to have the latest version of Hangouts with all the new features, but it will be coming to other Android 4.0 and above devices in the coming weeks. Hopefully the "coming weeks" doesn't mean a month from now. I'm hoping for sometime next week for it to start rolling out. Although, I'm sure when people start getting their Nexus 5's in the next couple of days that there will be an APK floating around for us all to install.

I don't know about the rest of you, but I'm excited to get SMS integration into Hangouts. Now all we need is VoIP with Google Voice and we'll be down to just one messaging app from Google. Which is the dream of us all.