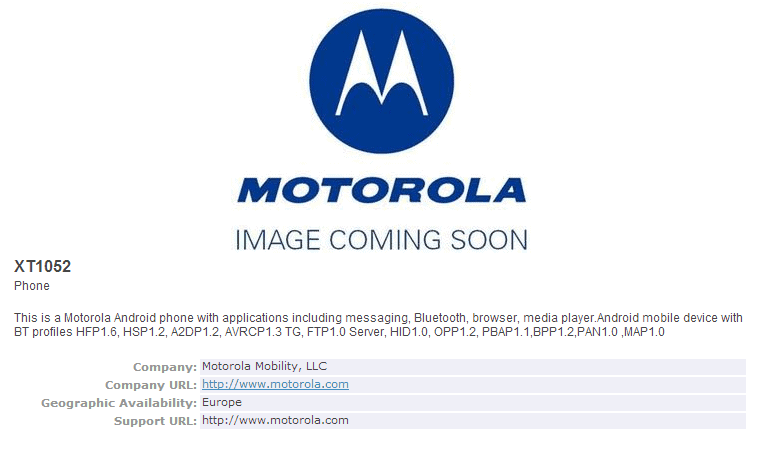 When Motorola announced the Moto X this past summer, many were disappointed that it wouldn't be coming outside of the US.  Motorola issued a statement shortly thereafter stating that while the Moto X would never be coming to Europe in its current form, it represented the start of a new brand, and as such would have some sort of spawn that would make its way over to Europe eventually.  Motorola went on to stress the importance of the European market and assured customers they wouldn't be forgotten across the pond.  That day might be approaching fast too, as a new Motorola Android-powered phone has just passed through the Bluetooth Special Interest Group's approval process.  There are a number of things here that point at this being the first Moto X derivative hitting European shores, and it starts with the model number.  XT1052 is the phone that just passed through the Bluetooth SIG, and that can be compared with the newest series of Motorola's phones:

Clearly this new phone fits quite snugly in between these models, and hints at another variant of the newest Motorola hardware set for Europe.  What's also telling is just what passed through the Bluetooth SIG's certification process: Bluetooth 4.0.  Since this is a big feature of the newest Moto hardware, it yet again points at a possible European Moto X, possibly with some software tweaks and upgrades.  Since the entire lineup of the newest Droid devices listed above and the Moto X share the same hardware (minus screen and battery differences of course), it's pretty difficult to say what would be changed in this new model.  Motorola has been more aggressively pushing the Moto X lately, including dropping the price by well over $100 on its MotoMaker website for AT&T customers.  This could also hint at a lower priced European model, which is particularly handy when considering that there's no "on-contract pricing" in Europe like there is in the United States on most major carriers.