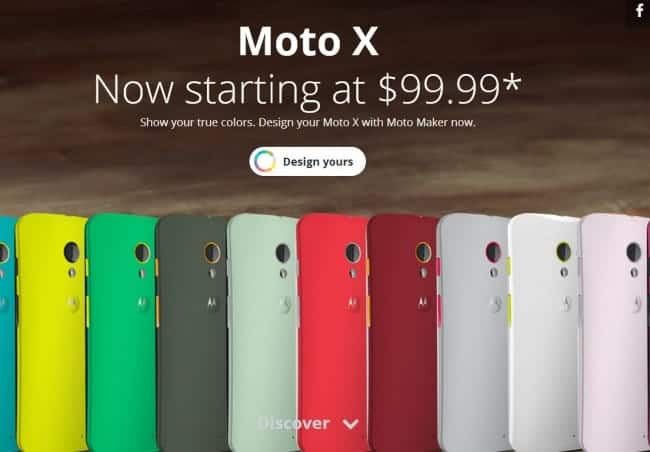 The Moto X is a pretty great Android smartphone. Not only is it one of the better devices to come from Motorola in recent years but, you really can make your own Moto X. With a vast array of customization options available when using the Moto Maker. Sure, it's not got the same sort of specs as some other smartphones on shelves but, it performs excellently and besides – how many other smartphones will respond to you talking to it without touching a thing? We really liked the Moto X when we reviewed it. However, the price of the device was a string for many, going for the same $200 price point as the Galaxy S4 and HTC One on contract just didn't seem to add up to many. Especially considering we had heard for months that the Moto X was going to be affordable.

Well, thanks to this most recent price cut, the Moto X is now available for just $99. How you go about getting that price can be tricky depending on which carrier you're using but, the deal is out there. Starting with the Moto Maker, you can purchase a 16GB Moto X on AT&T for $99, or $149 for 32GB. And, if you design a Moto X through the Moto Maker, you get a free Motorola Skip, which unlocks your device with a single tap. Now, if you're going the carrier route you can score the same model in either black or white for $99 from either Sprint or US Cellular. The regular versions of the Moto X sell through AT&T and Verizon for $200 still, which is a little bizarre but, you can hit that sweet price of $99 on Amazon.

No matter which variety of the Moto X you're going to be getting, you'll be getting a very capable Android smartphone for a pretty good deal. Of course, these prices include a new, two-year agreement but that's hardly surprising. Now, if they would only drop the unlocked price and those still locked into contracts might be inclined to join Motorola's colorful revolution.