The Motorola DVX has been rumored for almost as long as the Moto X, and it’s always been said to be a mid-range device that Motorola intends to sell globally, or at least in emerging markets, where they could see the most growth. It now looks like its official market name will be the Moto G, a name which Motorola has just trademarked.

The phone is expected to have a few swappable colored backs. The backs of the Moto X couldn’t be swapped, but it’s likely this one is made with cheaper materials and a cheaper manufacturing process, so they made the backs swappable. Design wise it looks much like the Moto X.

It’s supposed to arrive with the same X8 processor (dual core S4 Pro with Motorola’s own voice and contextual cores). This tells me, first, that Motorola really wants to push the touchless control thing into the market, and second, that if they could, they would’ve put a more powerful processor in the Moto X, and this one in the Moto G. It doesn’t make much sense to put the same processor that you have in your flagship, in your mid-range devices, too. But they have no choice at the mid-range, because that’s the type of processors mid-range phones have today. Maybe next year we’ll see a better separation of processor class in Motorola’s smartphones. 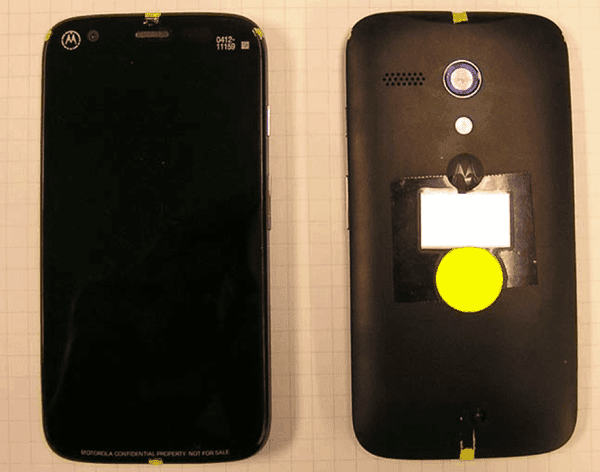 The Moto G will also come with a 4.5″ LCD screen, which is a size that has also started being popular at the mid-range lately, and although this one is probably not an IPS display, there are some that are starting to use IPS at that range, and we’re definitely going to see a lot more mid-range phones with IPS displays next year. But for now the Moto G should be fine with a normal, yet relatively high quality LCD.

The phone will be dual-SIM, which is another growing trend especially in emerging markets, where people use 2 SIM’s or more, to save money when they are talking to friends from other networks other than their own. The Moto G will cost $200-$250 off-contract, which seems like a good price, not knowing what other specs it will have (storage, RAM, camera, etc). It should come out before the end of the year.