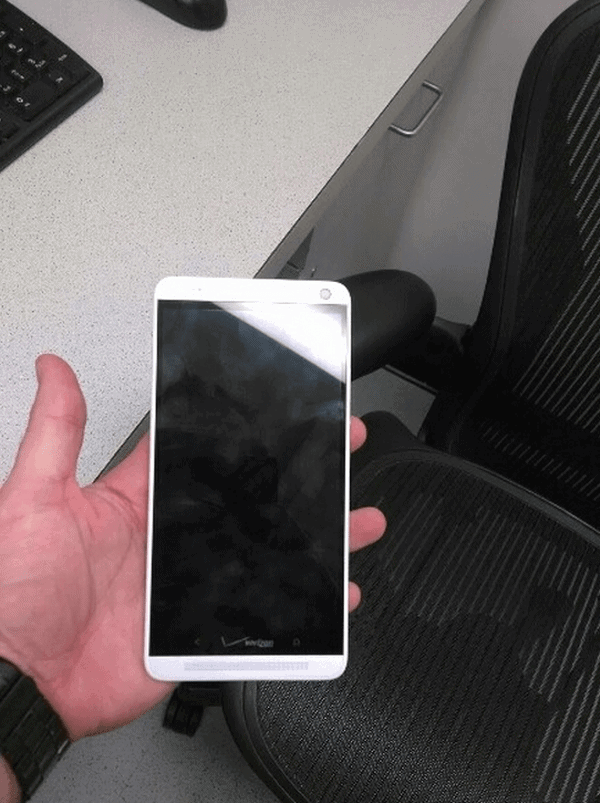 Over in the "Rumoured Devices" forum at Android Central a poster has a friend that works at a Verizon retail store in New jersey just sent him a couple pictures of the soon-to-be-released HTC One Max with the Verizon logo emblazoned on the front of the phone.  The picture above is on the table beside an Apple iPhone 5 for size comparison, and the picture below allows you to see what it looks like in your hand – if you like large screens, it looks like a sure winner.  The Verizon insider also reported that the back of the HTC One Max is also removable and does have the fingerprint sensor.  Although there was no confirmation that the removable back panel house a secondary battery, that is also being rumoured.

This picture below shows the back of the HTC One Max with the fingerprint sensor directly under the camera and flash which we reported on at the end of September.  The details of this phone are slowly starting to come together, as well they should, since the rumored release date is October 17.  We know that it will have a fingerprint scanner/sensor, that it has a removable back, and, most importantly it is headed for Verizon, after earlier rumours had it going to Sprint…not that we have anything against Sprint, but HTC needs the HTC One Max on a larger network, with more potential subscribers that could translate into more sales and profits for the troubled manufacturer.  The HTC One Mini is an AT&T exclusive and it looks like the HTC One Max will be a Verizon exclusive, with only the original HTC One being on multiple carriers.  HTC would sell so many more phones if they would stop this exclusivity with certain models – they need money and spreading the HTC One Mini and Max to all carriers would result in more sales. 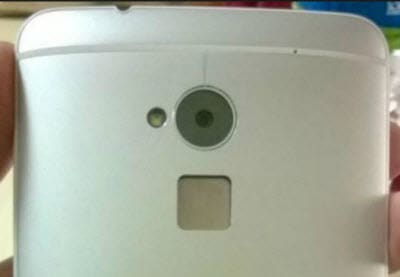 The HTC One Max should be announced by October 17, but not too much is yet know about its specifications.  A leaked spec sheet claimed it would have the Qualcomm Snapdragon 800 quad-core processor, however, based on benchmark results, it looks to be the slower 600 processor, which is rather a shame for a flagship phablet smartphone.  It is also rumored to have Android 4.3 out of the box, which if true, will be good news for potential buyers.  The rest of the details are sketchy, but look like this:

Let us know if you are looking to rock an HTC One Max phablet or are you sticking to the Samsung Galaxy Note 3.