Skip to content
Trusted By Millions
Independent, Expert Android News You Can Trust, Since 2010
Publishing More Android Than Anyone Else
39
Today
39
This Week
484
This Month
484
This Year
118381
All Time LG have announced that their G Pad 8.3 Android tablet will be available to buy in 30 countries by the end of 2013, with the G Pad 8.3 being available in South Korea in retail shops and online from the 14th October.

LG’s latest foray into the fiercely contested Android tablet market sees the release of a uniquely sized 8.3 inch tablet. LG claims that the 8.3 inch size is the result of consulting with consumers aged between 20,and 60 about the optimum size that a tablet should be, as well as the required level of comfort whilst the tablet is being held one-handed. The South Korean manufacturer even goes so far as to claim that the G Pad 8.3 is a palm-sized design.

Unlike LG’s previous tablet offering was the Optimus Pad(or G Slate as it was known in some markets), that was overpriced, and boasted having dubious features such as 3D recording and cheesy red and blue anaglyph 3D effects, the G Pad 8.3 looks to be a much better offering. 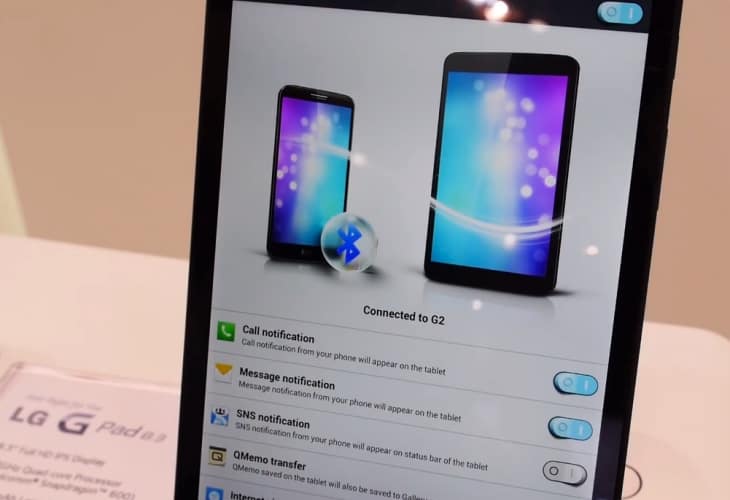 LG have attempted to create a truly connected experience with the inclusion of the Q Pair application (as pictured above). Q Pair allows the tablet user to view every call and message received on their smart phone, giving them the ability to either take the call or reject it with a text. Needless to say you can also reply to texts via the Q Pair app, which is compatible with most manufacturers phones which have Android Jelly Bean firmware installed. Q Pair will be available for download from the Google Play Store.

The G Pad 8.3 also offers some of the same features as the newly released G2 smartphone, which include :

Since LG have announced the imminent release of the G Pad 8.3, all that really remains to be found out is what the tablet will be priced at. So far the G Pad 8.3 has been rumoured to start at a fairly reasonable price of $299 for the wifi version, with a wallet cringing price of $515 being touted for South Korea.

With the trend towards bigger screened smartphones continuing, have 7 inch tablets become too small? I’ve always been a fan of the 8-ish inch range of tablets, especially the old Samsung Tab 8.9, so I’m looking to getting my hands on the G Pad 8.3. Let us know if it floats your boat as well in the comment section