Over the past few months, we have featured numerous leaks of Google’s unannounced successor to the popular LG Nexus 4. It is true that pictures can often say a thousand words but it is no substitution for a video.

It would appear that the French Tech Blog site, Smartphones.sfr.fr has managed to get their hands on the Nexus 5 and walked out with a 7 minute long video of the action. The video, posted below gives us a unique view of what we can expect with Google’s new phone.

As you can see, the bluish hue that we have grown accustomed to in Jelly Bean has been replaced with a white color palette in the notification area. This does coincide with previous leaked photos of the phone which adds to its credibility.

This is also the first time that we have officially seen the word “Nexus 5” used in the System details of the phone. Interestingly enough, the Android Version shows the moniker of “KeyLimePie” rather than KitKat. I wonder of this will eventually change or maybe it shows that Google and Hershey were trolling with us with Kit Kat. 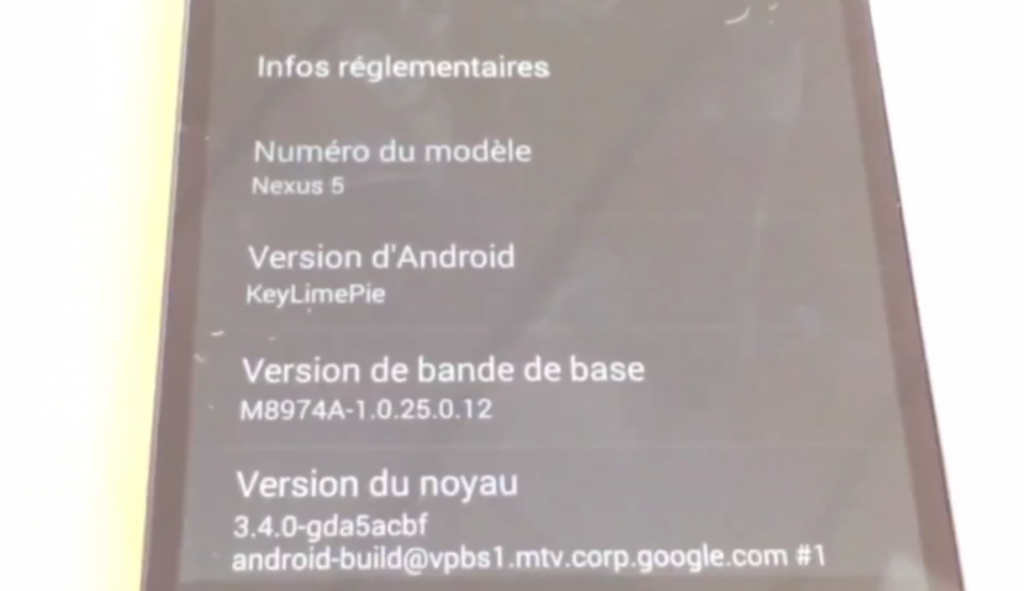 The Kernel Version is shown as “3.4.0-gda5acbf-android-build” however the section showing the build date seems to be missing so we are unsure on when this build was compiled. This shows that there does not seem to be any kernel level changes as the current builds of 4.3 Jelly Bean are also based on the 3.4.0 kernel. This also supports our earlier assumptions that Android 4.4 will be a minor upgrade.

Interestingly, there is a new menu item in the Settings Menu for Printers. This also confirms a previous leak that we say last week about native printer support. I am sure that this is a welcomed change to any productivity buff.

We are still reviewing this video for any other nuggets of information. Until then, the official launch may be as little as a few days away.