This whole flexible display thing is starting to really heat up between Samsung and LG. With LG announcing that their flexible OLED has hit mass production yesterday, it seems that one of LG’s key puzzle pieces has fallen into place. Well, today it’s LG Chem’s turn and the company is announcing new battery technology that will allow them to fit batteries into devices with curved displays and such. Oh, and guess what? They’re already in mass production.

Much like Samsung, LG has many departments that make up the company, LG Chem is one of them. They’re one of the biggest battery manufacturers in the world and they’re often finding new ways of designing new batteries and/or finding a way of making more efficient cells. In the LG G2 for instance, the Stepped Battery used allowed LG to get 16% more battery inside the device’s shell. Along with the Stepped Battery, the company is making noise about their Curved Battery and their Cable Battery. 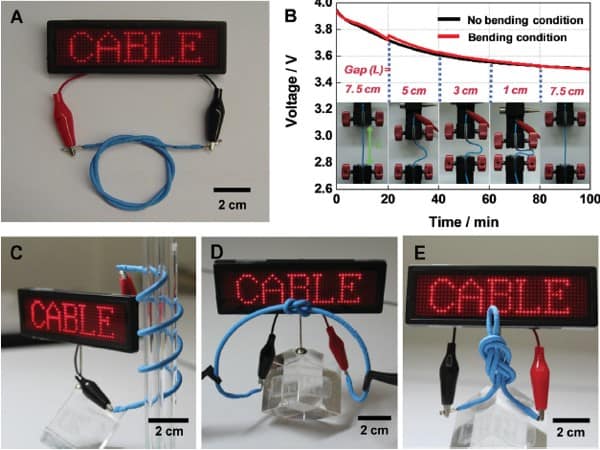 The Curved Battery is exactly what you think it is; a battery that has a slight curve to it. Meanwhile, the cable battery is something a little more out of this world. It’s a battery that looks like a thick wire and can even be tied in a knot and still power devices. This sort of technology will be great for watches and smartphones with curved displays.

In fact, LG Chem’s Press Release had some choice words to deliver on the whole flexible display smartphone front:

“LG Chem’s Curved Battery refers to packs that can power IT devices with curved screen or flexible designs such as smart phones, watches and glasses. The company has the exclusive patent of Stack & Folding technology which reduces physical stress when realizing the curved design of battery packs. The mass production of Curved Battery has been started since this month and the products will power the next smart phone line up of LG Electronics.”

To us, that sounds like LG has ticked another box on their To-Do list entitled “Flexible Smartphone Q4 2013”. Of course, this is as much conjecture as the announcement of their Flexible OLED hitting mass production. However, LG is making a lot of noise right now and they’re sending out all the right signals.