We were told that we were going to see a T-Mobile update for the One today and lo and behold, Android 4.3 cometh. While HTC have struggled with updates in the past, this Android 4.3 update has gone pretty well, considering HTC's past with updates. For instance, does anyone remember an LTE device by the name of Thunderbolt? Hopefully, this is a sign that lightening doesn't strike twice. The Android 4.3 update is rolling out to T-Mobile users right now and the version number you're looking for is 3.24.531.3.

Coming in at around 560MB, you should set some time aside to let this one run its course. After it's done though, you should have Android 4.3 on your device with a few tweaks to the device. Unlike the just announced One Max, this doesn't bring with it Sense 5.5, leaving BlinkFeed just as obtuse as it always has been. HTC haven't said anything about Sense 5.5 coming to the One or the One Mini but, we'd certainly hope that it's a no-brainer. 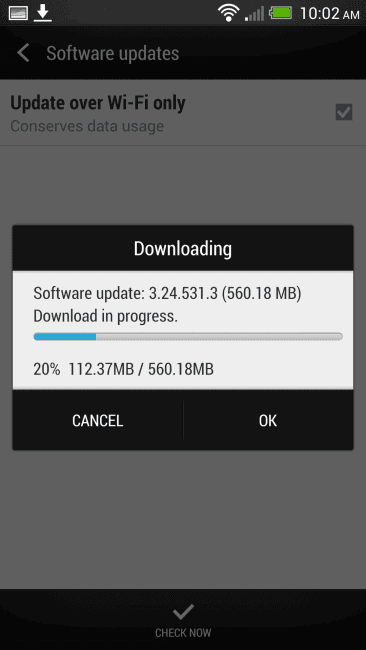 AT&T users have been enjoying this update for a while so, it's nice to see it finally hit T-Mobile. As for the rollout of the update, many users have been reporting that the update was waiting for them but, it might be a day or two until you get your update. You know the drill by now, head on over to your system settings, about phone and check for those software updates!

It's good to see that HTC seems to be getting on track when it comes to software updates these days, hopefully this carries on with Android 4.4, KitKat launching soon. After all, people are more likely to buy a device from HTC once more if they take care of their users. Sadly, that hasn't been the case in the past. Kudos to HTC and T-Mobile on this one, let's just hope the turnaround with KitKat is swift, too.

Trusted By Millions
Independent, Expert Android News You Can Trust, Since 2010
Publishing More Android Than Anyone Else
6
Today
165
This Week
668
This Month.
8109
This Year
109581
All Time