When HTC finally announced the One Max, they introduced Sense 5.5 along with it, which brought with it some new features and finally helps people tame the awkward brilliance that is BlinkFeed. We were all wondering when the regular One was going to get the update to Sense 5.5 and it would seem the answer to that is pretty much right about now. In parts of Europe, and Russia, HTC One devices are getting notified of an update which brings the software version up to 3.62.401.1. As discovered by @LlabTooFeR the update does indeed contain Sense 5.5. 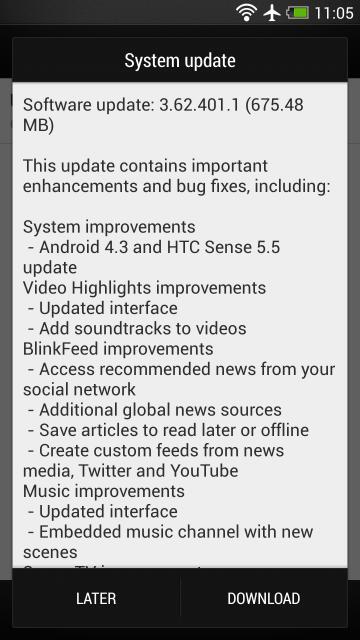 You can take a look at the full changelog below:

Coming in at 675MB, this is sizable update for sure and, if you're somewhere in Europe waiting for the update, you might want to find some WiFi. Also, Custom ROM lovers should note that a new HBoot is included this time around, bringing things to version 1.55. A new radio is included, too. Overall, this seems like a pretty solid update from HTC and we're hoping that it makes its way stateside sooner rather than later.

Recently, HTC has been seen to turn around their poor track record when it comes to Android updates, with Android 4.3 having now rolled out to major carriers in the US and elsewhere around the globe. Here's hoping that HTC can keep this momentum up and right one of their bigger wrongs over the years. With KiKat said to be launching in the next month, it'd be nice to see HTC make plans to roll that out to the One family in a timely manner, too. Let us know if you've gotten the update!

Trusted By Millions
Independent, Expert Android News You Can Trust, Since 2010
Publishing More Android Than Anyone Else
31
Today
92
This Week
469
This Month.
469
This Year
110644
All Time