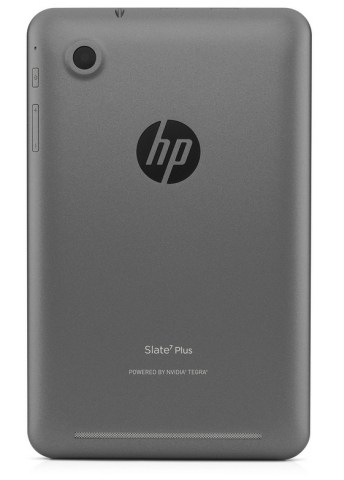 HP wants to make a big push into the Android tablet market (in the Chromebook market, too), but their first try hasn’t been too impressive, with the first HP Slate 7. They’re looking to rectify that with an improved version of the HP Slate 7 launching by holiday shopping season, at least in Europe.

The new tablet will be called HP Slate 7 Plus, which pretty much tells you that it’s not a completely new tablet, but the same one with improved specs. The first Slate 7 came with a Rockchip RK3066 dual-core CPU, and a 1024 x 600 resolution. The new one will be upgraded to a quad-core Tegra 3, an 1280×800 resolution, 1 GB of RAM, 8 GB of storage, microSD slot (old one didn’t have it), and front and rear cameras. It also comes with HDMI-output and Miracast support. It will run Android 4.2.

This obviously isn’t a high-end tablet, and the price point of $140 more or less matches that. The question is, are you going to get a tablet that has the specs of last year’s Nexus 7, or will you pay $90 more for a new Nexus 7? That extra $90 is more than 50 percent more, so it may not be a light decision, but it may be worth it to go with the new Nexus 7 anyway, unless you want to give this one as a gift or buy it for kids.

HP is one of those companies who like to produce mediocre products “just to be in a market”, but never tries to excel at anything. We have noticed, however, that at least in terms of looks and build quality, Google has helped them improve with the Chromebook 11. Now they need to help them improve their Android devices, too.

There’s still the issue of falling behind in specs, though, as the new Chromebook 11 has last year’s specs, and is more expensive, while HP and Google are basically implying that it’s a next-gen version of Samsung’s ARM Chromebook from last year. This new HP Slate 7 kind of shows us the same thing – that HP is behind in specs.

They need to source next-gen components faster and cheaper, and also try and launch higher-end devices that look great, to get that halo effect for their other products, and make people trust that HP is able of producing high-quality products. Otherwise, if anyone happens to buy an HP product, it will be because they are very price sensitive, and that’s not a great position for HP to be in.