The folks from Concept-Phones received this concept made by Tobias Hornof for the Samsung Galaxy S5, which is rumored to be announced in January at CES 2014. The concept clearly follows the line of evolution of Samsung’s flagship taking most of it’s cues from the S4. What I love the most about these concepts is that most of them are more related to what the designer wants than what the company might actually make.

First of all, the buttons, I don’t think Samsung will ever do something with 3 capacitive buttons, they’re either sticking to the clicky home physical button or they’re going full software navigation bar (like the Galaxy Camera) but the 3 capacitive buttons just don’t make sense with Samsung’s track record. The screen is something I’m not convinced either, the edge-to-edge screen sounds nice in theory, but that kind of non-bezel design doesn’t seem plausible and it’s probably even uncomfortable to use. The Moto X and the G2 are pushing the limit with their small side bezels and I really don’t think that making them any smaller would be any good.

Here you can see the comparison of Hornof’s concept with every other Galaxy S flagship made by Samsung and I have to say, the original Galaxy S and the SII look pretty bad by comparison, way to thick and bulky. 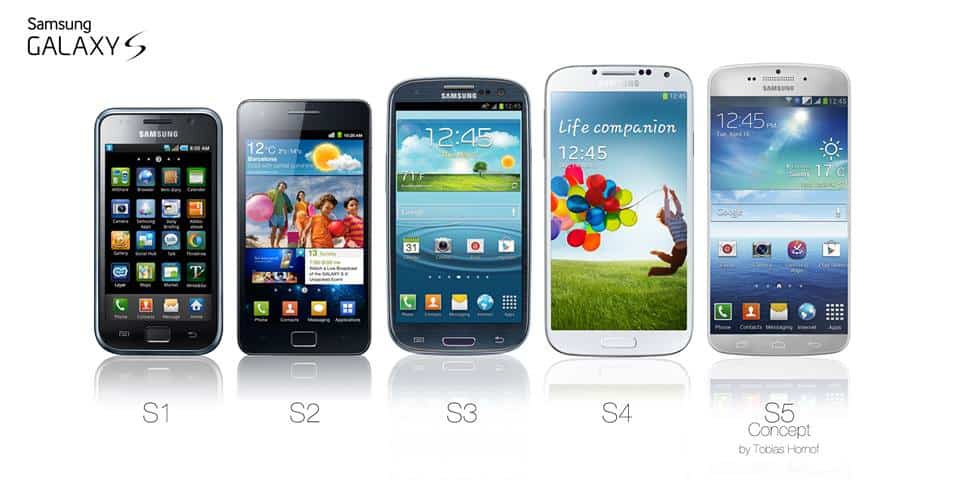 As usual, the concept states that the S5 has a 64 bit processor, 32 or 64 GB of storage, 16 megapixel camera with dual flash (looks like Apple’s two-in-one LED flash) and an 8 megapixel front facing camera. 8 megapixels for the front camera sound like a lot, specially with a lens that small, but who knows what Samsung has in their lab.

What do you think? Could the Galaxy S5 look like this or you have a completely different idea on your mind? Let us know in the comments below