Here we go with even more leaks about Android 4.4. Which is expected to be announced sometime next week, of course that’s unconfirmed as is this rumor. So take this with a grain of salt. The stock Android launcher doesn’t get a whole lot of attention from Google usually. It hasn’t really changed much since Android 4.0, and even looking back at Android 2.3 – Gingerbread it didn’t change much from there either.

Android Police has been doing some more digging around and has found some pretty compelling evidence which supports Google working on their stock Android Launcher, and looking at the screenshot below, it may be called the Google Experience. 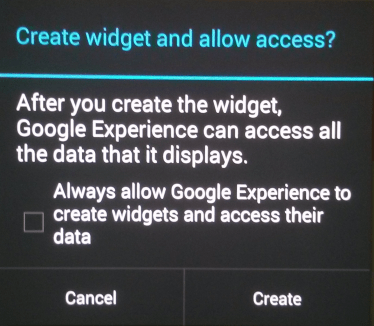 Internally, this was com.android.launcher2 and now it will be com.android.launcher3 in Android 4.4. So it looks like the launcher will be hitting version 3.0. There are also items that refer to the launcher as com.google.android.gel and we are guessing the GEL stands for Google Experience Launcher. There’s also a new popup warning that showed up in a recent build of Android 4.4 which mimics warnings you’ve seen from other launchers like Nova, which even says “After you create the widget, Google Experience can access all data that it displays.”

Now as far as what changes we’ll see in the launcher. Well so far we haven’t seen a whole lot of changes from the leaks. But you can check out our mega leak post from yesterday to find out more. Hopefully it’ll be a much better experience and keep us from wanting to install other launchers like Nova, Apex, Action Launcher Pro and many others.

Right now, October 15th is the rumor for Android 4.4 unveiling. Like we said before that is unconfirmed. So we don’t know for sure yet. But it’s looking less and less likely since Google has yet to send out press invites. But a Google Experience launcher? Sounds awesome right? Let us know what you think in the comments below.