We’ve heard a rumor that Google was partnering with ASUS to make a Nexus 8 tablet. Which I feel would sell very well. I, along with many others, don’t want a 10-inch tablet but think a 7-inch tablet is too small. Now it looks like a LG-V510 tablet has passed through the Bluetooth SIG. Also the listing date was October 25th, just a couple days ago.

What’s interesting here is that the LG-V500 is the LG G Pad 8.3, so the LG-V510 could just be another variant of the G Pad 8.3. Perhaps an LTE version. Or it could be a Nexus 8 modelled after the LG G Pad 8.3, which would be fine with me. The specs for the Nexus 7 according to a concept device it has a 1920×1200 resolution display, along with a 1.7GHz quad-core Snapdragon 600 processor along with an Adreno 320 GPU. The tablet also has a 3MP rear-facing camera and a 2MP on the front, along with a 8GB internal storage for $199. Now that was also a concept device, so it’s more than likely not real.

The image below is a screenshot of the Bluetooth Certification on the LG-V510. We still aren’t sure if it’s just a LG G Pad 8.3 variant or something else. I’m hoping for a Nexus 8 device, as I’d love to have a tablet a bit bigger than the Nexus 7, but not something as big as the Nexus 10. Hopefully we’ll know soon as we expect to see an event or announcement from Google with Android 4.4, Nexus 5, and the Nexus 10. Hopefully we’ll see a Nexus 8 and a Nexus smartwatch at this event or announcement as well. 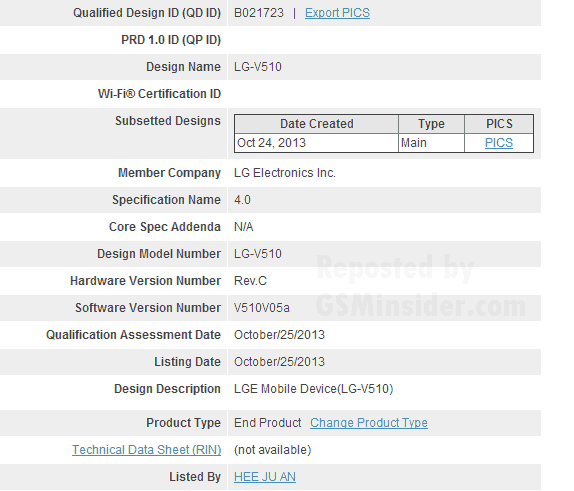 How many of our readers would love to grab a Nexus 8 that’s modelled after the LG G Pad 8.3? Which is a great tablet, but it’s not “Pure Google”. Let us know your thoughts in the comments below.