Skip to content
Trusted By Millions
Independent, Expert Android News You Can Trust, Since 2010
Publishing More Android Than Anyone Else
1
Today
88
This Week
581
This Month
4588
This Year
114616
All Time Google Nexus 5 Comes KitKat Ready;Starting Today At $349
Everyone has been patiently waiting for the next phone in Google’s flagship line up of the no frill pure android experience known as the Nexus Program. Starting today, the wait is finally over and you can get your hands on one beginning at $349 for the 16GB model and $399 for the 32GB. Both coming black and white to suit your taste. Thanks to the folks over at The Verge, we all get a little peek at what some hands on time looks like. Hopefully some of us can gather our own first impressions in the near future.

LTE For All
Right off the bat the most noticeable feature of the nexus 5 just might be the fact that it supports LTE. For those of you who own or used to own a nexus 4, you already know that it doesn’t officially support LTE. That is a huge leap forward in terms of service quality and speed especially in todays world of immediate gratifications, quick lunches that beg even quicker internet, and the undying need to have everything faster than one can blink.

Sleek Design, Powerful Hardware
As some are probably already aware, the Nexus 5 is packed pretty similarly with the same innards as the LG G2, just running a pure Android experience with 4.4 KitKat instead of manufacturers UI overlay. There’s no debating that the Nexus has never really been the pioneer in terms of phone hardware specs or features, but there’s no room for argument on the fact that no Android experience is quite like that of a Nexus, with its pure stock Android build up, and access to timely updates with the freshest software upon release. At least, for a few versions. The good news is that on the frontlines of hardware, this time around Google has stepped up its game once again to offer some pretty amazing specs. It sports a lightning fast Snapdragon 800 processor, and a beautiful 5 inch 1080p display with a sleek and sexy bare minimum bezel to make the screen feel bigger without feeling to odd while holding it in your hand. 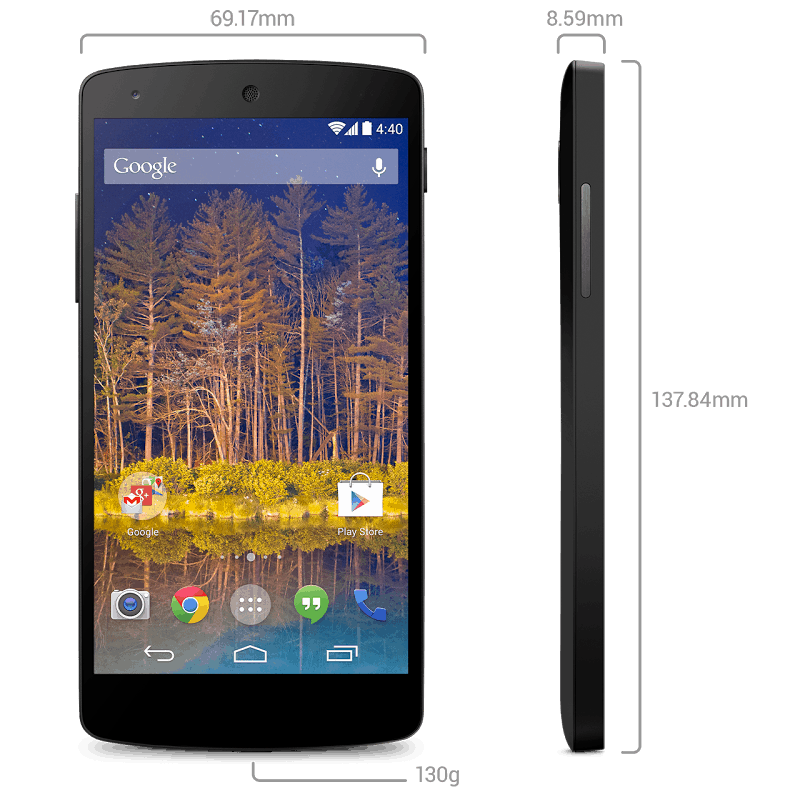 Simplicity At Eye Level
Although we all have to wait for our own Nexus 5’s, you can tell by looking at the images that Google decided to keep a similar design to that of the new Nexus 7. The solid curved plastic back is non removable and branded with the Nexus logo down the middle. Sitting just above that you’ll see the camera in the top left corner just waiting to snap a shot off at anything you might find interesting.

Stop Or I’ll Shoot
Speaking of cameras, the Nexus 5 comes packed with an 8mp shooter on the back, and comes neatly tuned with OIS(Optical Image Stabilization) to make for a better shot. At current it won’t be possible to give clear and concise feedback on whether the camera is really all that better than the one on the Nexus 4, but it couldn’t be worse right? Although it isn’t expected to knock the front runners in mobile phone photography off their thrones, the Nexus 5 and hopefully KitKat itself comes with what Google is calling HDR+. Basically, the camera takes multiple silent burst shots and fuses them together to make one compelling picture. Will the photos on the AOSP camera finally start to get some positive feedback? 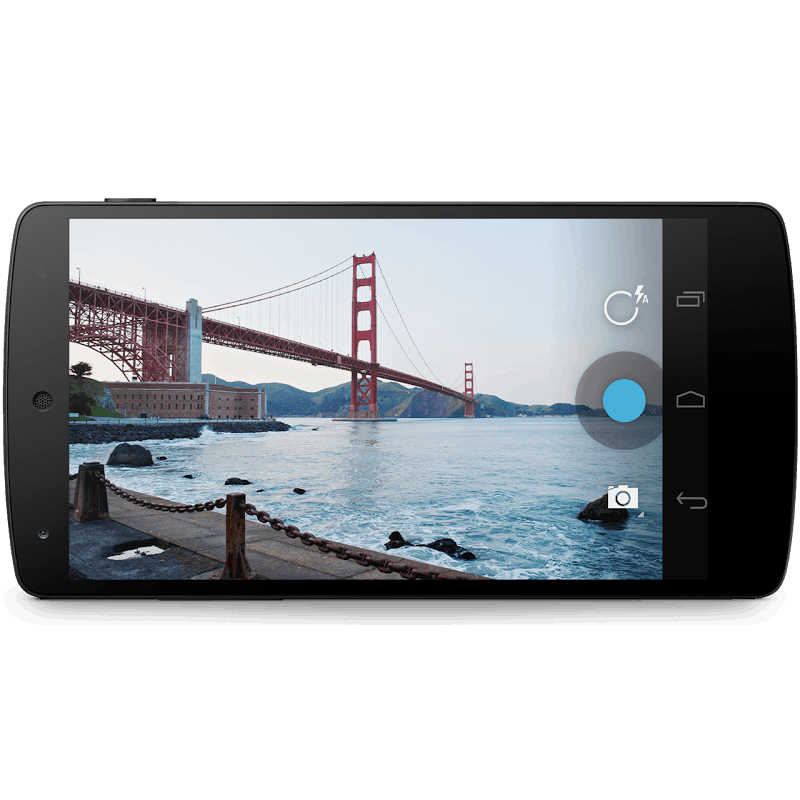 Use It Or Lose It
The big question for many users is whether it will hold up through the daily grind. While we don’t recommend trying to throw anything you can think of at it the minute you’re able to power yours on, you can rest assured that it should hold up quite nicely in most situations, and you should hopefully be able to use it to its full capacity. Still, time will tell. The Nexus 5 is powered by a 2300 mAH battery, and the display is made up of Gorilla Glass 3 which is extremely thin and light but toted as exceedingly strong as Gorilla Glass always is.

Turn Me On, Crank Me Up
Button placement on the Nexus 5 seems to follow in the same footsteps as the Nexus 4, as Google decided to keep the volume bar and power button in the same spots as before. Also following suit are the headphone jack and charging ports in their respective locations. This should feel warm and familiar to those making the upgrade from last years model, and leave the fear of shock due to misplaced buttons and arguably just bad design in the dust. This is certainly good news for those of us who love listening to music on the device and find it easier to access the volume while the phone is in your pocket.

Launching Your Experience To New Heights
If you are expecting huge changes here don’t be. Most of the stuff you will see with the 4.4 update will be under the hood and in how things work. Although, there are some minor tweaks and overhauls that happen at a design level. Most notably the launcher. Earlier termed as the “Google Experience”, the launcher has an updated app drawer, from which you’ll notice the widgets tab has been removed once you tap on it and go inside. Instead, Google has opted to throw the widget access back to solely the standard long press. The widgets look bigger and better than ever, but perhaps the most enticing things to look at with the new launcher are the translucent notification bar and home,back, and recent app buttons. This gives the screen a slightly larger feel as the wallpaper can be seen under them instead of constrained below their previously black borders.

Now Or Never
Google now is also now integrated into the launcher by swiping your finger over to the left, however you can still access it the old way by dragging your finger up like before. Along with the KitKat update, Hangouts gets an update as well and now supports SMS integration, although the big things people may be wanting is voice integration. Sadly we will still have to wait longer before we see this feature come over to Android.

Final Thoughts
Overall, the new, long awaited Nexus 5 looks to be stacking up as a pretty great device. Which is what we should expect if last years Nexus 4 is any indication of how Google wants things done with their flagship. Although some changes arent as huge as others, Google has confidently decided on the features that they feel matter the most. What remains to be seen is whether the consumer will see eye to eye with them here. As always, the Nexus will probably not snatch up a large portion of the smartphone market, but legions of loyal fans who love the nexus brand and share the same love of a pure Android experience will love probably almost everything about the device. Until we get some hands on time ourselves with this new phone, we can’t accurately comment on things like speed, camera quality, and battery life, but as soon as we are able to review the device in it’s entirety we’ll keep you informed.