Auto Awesome is a pretty great part of Google+ and it has been ever since it was announced. Essentially correcting the little mistakes we make while snapping away and making GIFs out of those burst shots you took on holiday. It’s a great way to get the best out of your photos, with minimal effort, all backed up by Google’s vast servers and cloud computing. They announced a number of tweaks and updates to the service during their event, alongside updates to Hangouts. Of course, photos are one thing, what about video? The idea that the same can be done for video is pretty awesome but, surely, not even Google could do such a thing? Well, yes they can, and yes they have. Say hello to Auto Awesome Movies.

Just as it has been with Auto Awesome for photos, everything is done for you. There’s a waiting time involved with videos though, as they’re much bigger files and the machines under Google’s control will have to go through the video frame-by-frame. This latest adventure from Google does a lot of what it’s been doing for pictures, it can adjust the color tone of the video, stabilize it, even add music from thousands of licensed tracks for you. The best thing about it is that when Google’s servers have done their stuff, a notification will pop up on your device and you simply touch it to take a look at your newly awesome video. 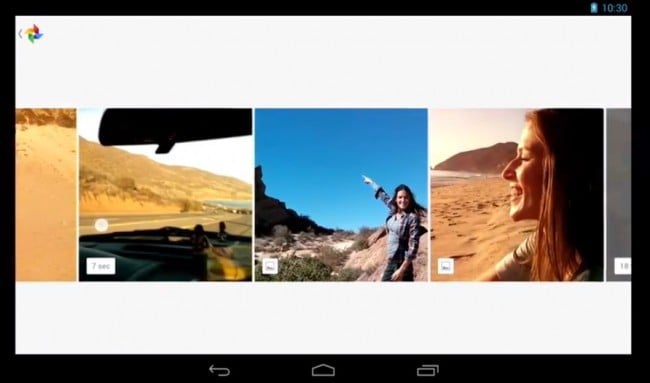 On Android, you can then take a look at each and every edit that Google’s machines have done for you. It’ll detail the changes and let you undo them, with a simple flick of the finger, just like deleting e-mails in GMail. So, if Google gets it wrong, or you’re a perfectionist – a fairly lazy one, at least – then you can in and make your own adjustments, allowing you to make the final stamp on the work.

This new update to Auto Awesome is a pretty big one and it leverages some of the quick fixes that have been available to YouTubers for some time only here, they’re all done for you. Making it easier than it ever has been to share video content with friends and family. With this, Google is presenting yet another reason to take a look at Google+ as an alternative to Facebook and Twitter. Speaking of Google+, why not come by and say hello?