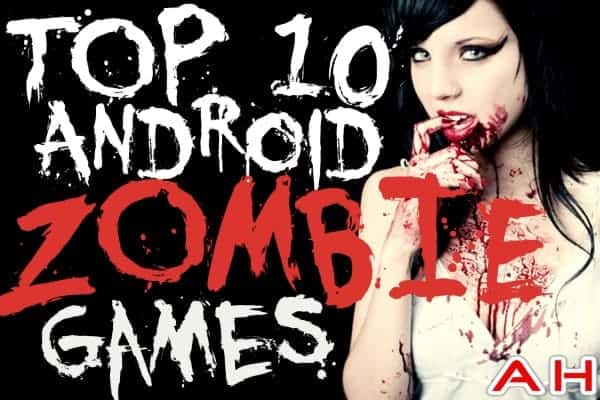 The best way to describe Into The Dead is a first person endless runner. The zombie apocalypse takes no prisoners and as what looks to be the last remaining survivor you must try to escape hordes of zombies. There’s only one way out though and that’s running directly through the masses. The longer you run the more points you rack up, and there are achievements you can and must obtain to level up which will allow you the opportunity to purchase and upgrade weapons to further your fight. Its a great little zombie game for the price of free and something to pass the time when you don’t have a lot of it to play.

Nothing makes zombies more appealing than giving them a stylized cartoon like look. In this end of the world side scrolling shoot em up, you are the lone survivor in the zombie apocalypse and you must save the world and humanity by killing every last zombie. You’ll face off against multiple types of zombies with different traits but you’ll have 24 different weapons at your disposal to help you. Its zombies the Call of Duty way with Black Ops Zombies. This is a scaled down mobile version of the zombie chaos you know and love from one of the hit console FPS franchises. All your favorites are here; Kino der totin, call of the dead:director’s cut, and ascension. But lets not forget the 50 amazing levels of dead ops arcade mode that you can play as well. You can play all by your lonesome or join up to 3 other players over wifi to really amp up the call of duty zombies experience on the go. Kill zombies, gain points, get money, buy better weapons, use power ups, kill more zombies. Graphics are pretty damn decent and if you’re craving some Call of Duty Zombies on the go, here’s your ticket to fun. You’ll have to throw down $6.99 for this game, but I say that’s worth it for the dead ops arcade alone. I spent countless hours playing just that mode. 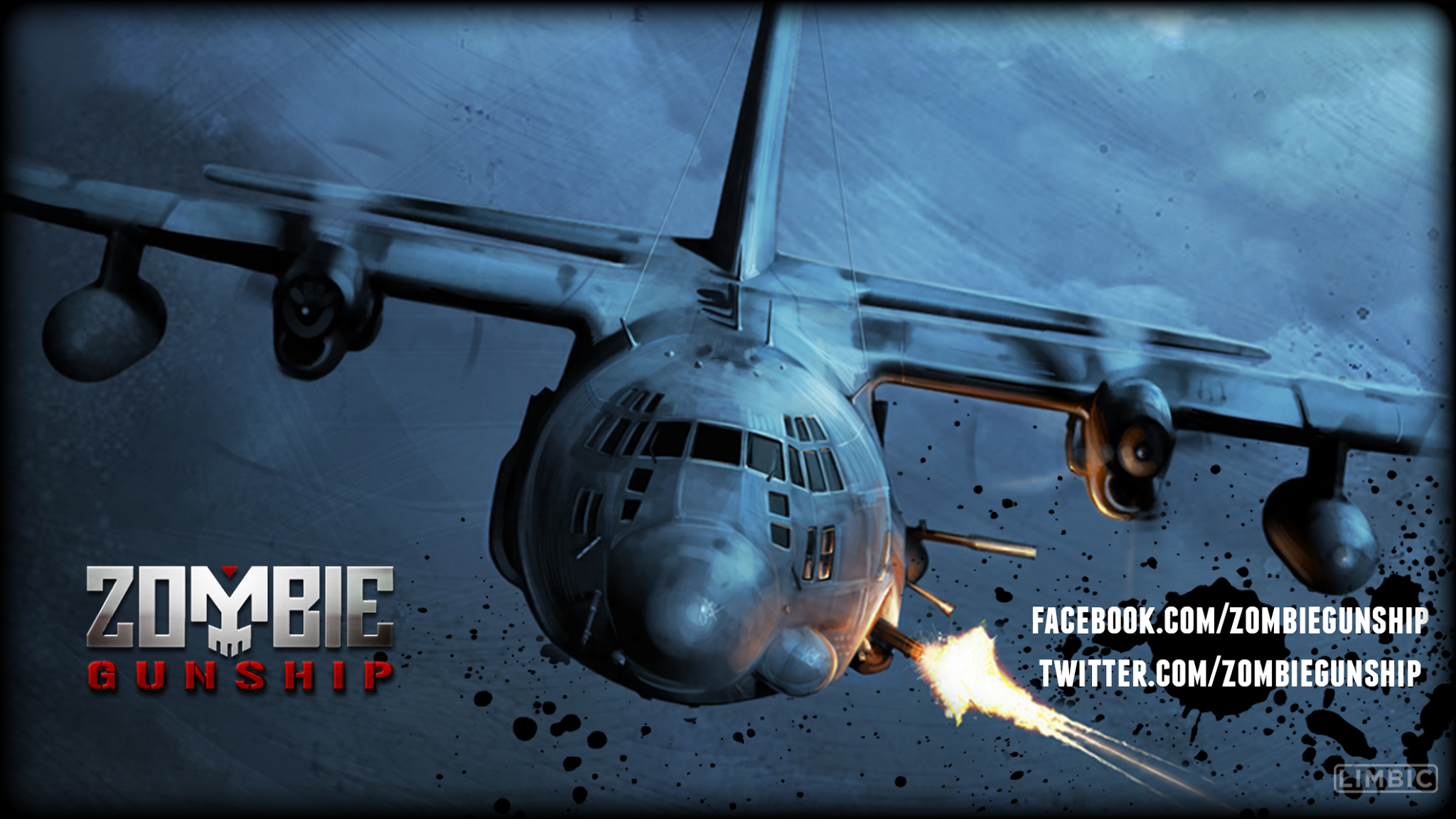 Featured as our game of the week a couple weeks ago, Zombie Gunship places you in the hotseat and right behind the guns of an AC-130 Gunship. Rain down hell on the teeming hordes of undead zombies and make sure they go back to where they belong. You have never experienced killing zombies like this before, unless you have already played this game. $0.99 is all it takes to get you behind the guns and start taking back humanity from above. 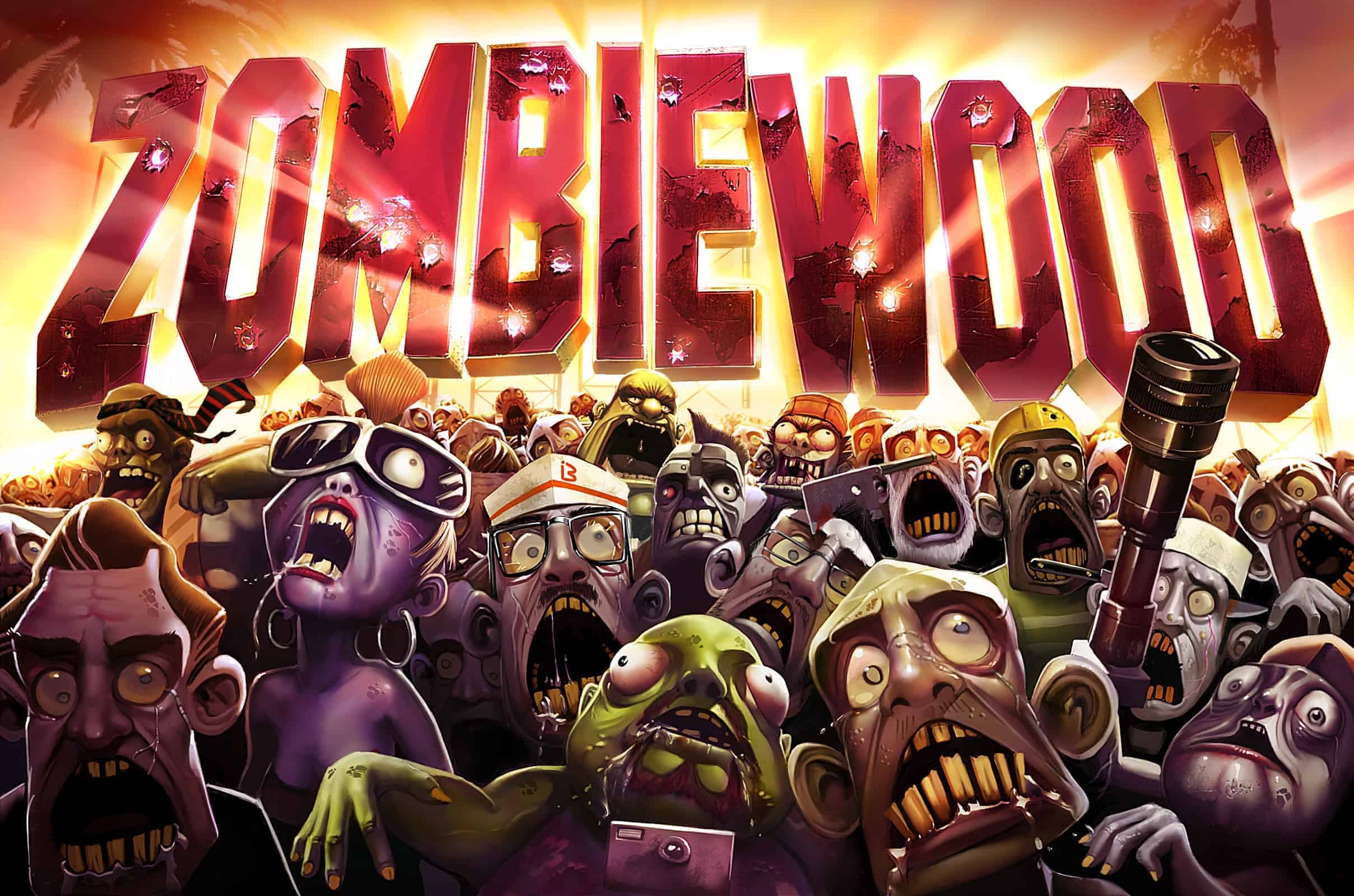 This is Gameloft’s answer to the massive amount of zombie games available, and I must say they have done quite a nice job at it. Take back L.A. from the evil undead with loads of weaponry and plow your way through 20 “movies” and 10 unique game modes of play. Single or multiplayer. Whatever suits you best. Whatever you do, just make sure you unload everything you’ve got. You’ll love the cartoon like style graphics and the regular updates with more free playable content. This top down dual stick zombie shooter is ready and waiting for you.

We all know it by now, and we all love it. Thanks to Madfinger Games and they’re unprecedented dedication to delivering a fantastic mobile gaming experience, Dead Trigger burst onto the scene and took over the Android gaming world by storm. The stellar tegra optimized graphics and ragdoll physics blew away our expectations, and the many, many options within the games content was only surpassed by the future content updates to bring an even tighter gameplay experience. 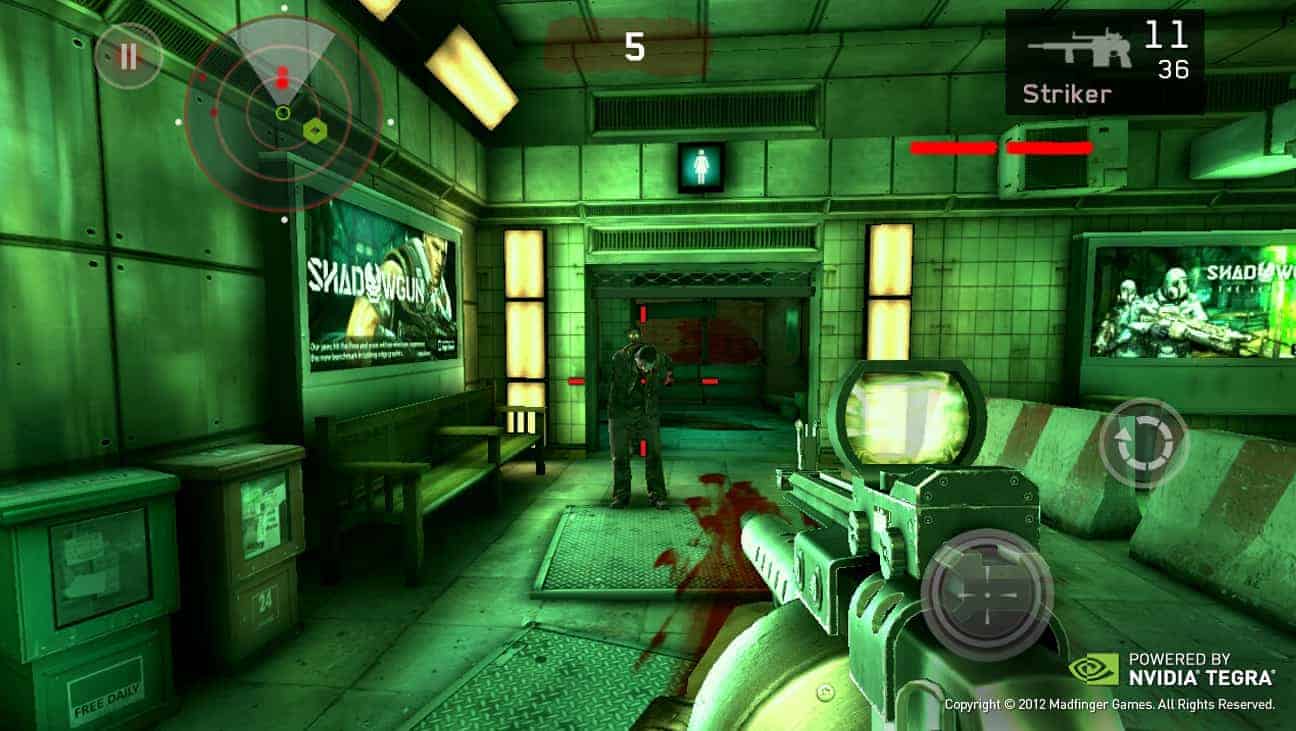 Plenty of weaponry, zombies to kill, and specialty events content led to this being the #1 hit zombie game on Android, damn near the #1 hit FPS, and probably one of the most popular shooters on mobile altogether. If you haven’t yet tried out Dead Trigger (*snicker* jk.) now’s your chance. 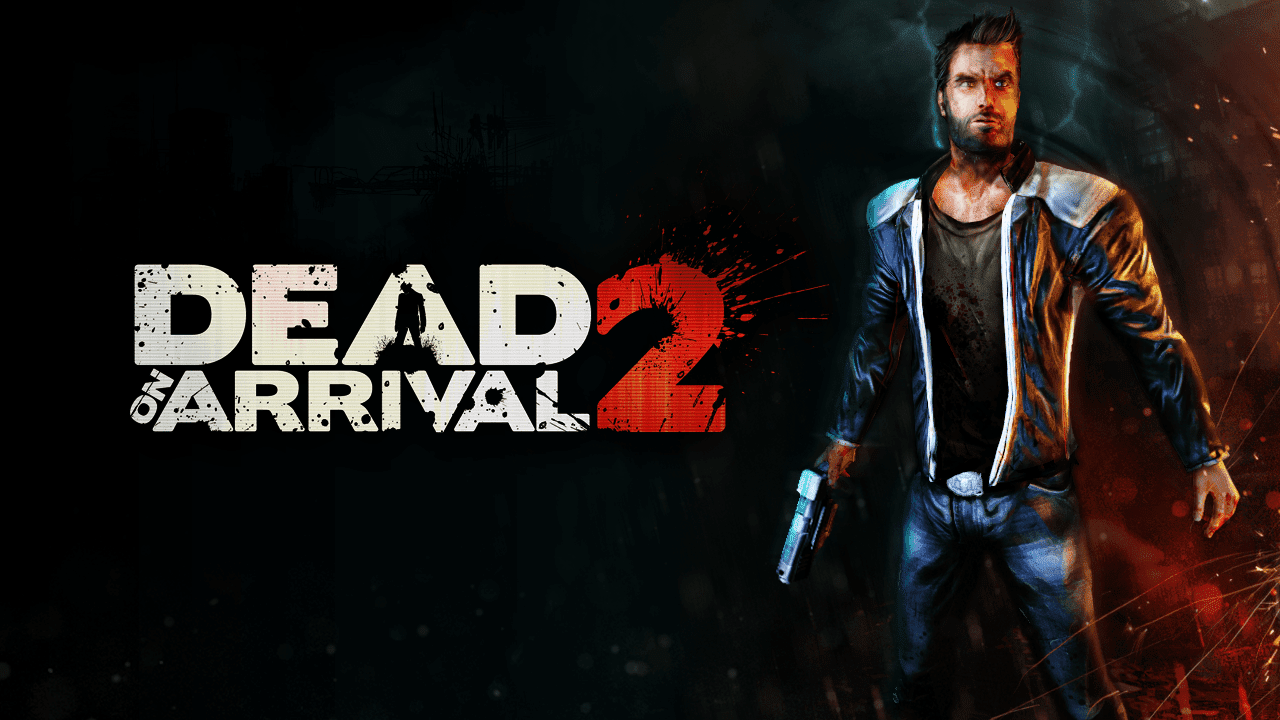 N3V games long awaited sequel dropped just recently, and this tegra optimized and controller ready top down dual stick zombie shooter is leagues ahead of the original. Better graphics, better gameplay, and of course multitudes of weapons should not only turn heads but keep them focused on the screen of the device they’re playing on. Play solo or team up with friends or strangers in the multiplayer mode which supports 2-4 players. Unlock extra weapons, modifiers and traps to help you kill all the zombies. You can customize your character with costumes(purely an aesthetic gamers preference but fun none the less) or buy heavy artillery like the rocket launcher. Even upgrade and mod your weapon with ice bullets to slow down those zombies all with the games in game currency called z bucks. If you have a bluetooth gamepad I highly recommend giving Dead On Arrival 2 a shot. You won’t be disappointed. 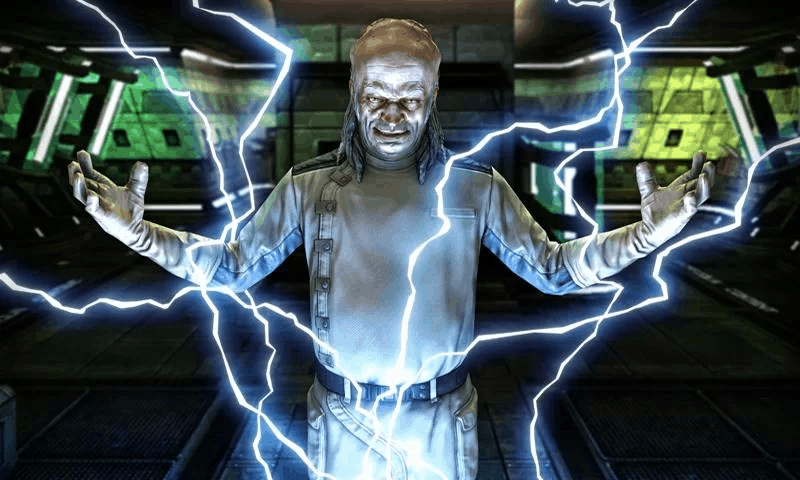 Featured in the weekly last friday, Dead Effect is a good mix of that oh so lovable Dead Trigger style FPS action with stellar graphics, mixed with some good old fashioned Dead Space style settings. Zombies in space just may be the new final frontier and the creator’s of Dead Effect Bulkypix seem to have figured it out. Forget that Activision and Call of Duty Black Ops already did this with one of their expansion map packs because this an android site lol. 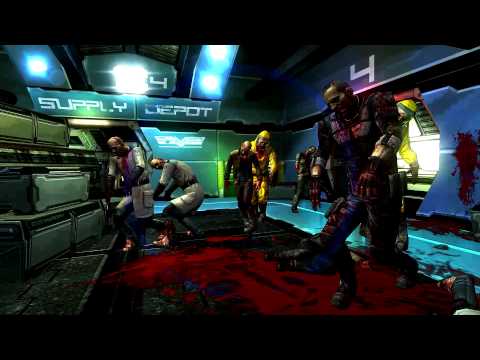 Dead Effect is free and if you have a device that supports high end graphics, turn em up and enjoy all that is has to offer. When things are down and you’re out of ammo, you can always rely on your trusty static shock gun to blast apart the undead. It’s just got a really slow reload timer. 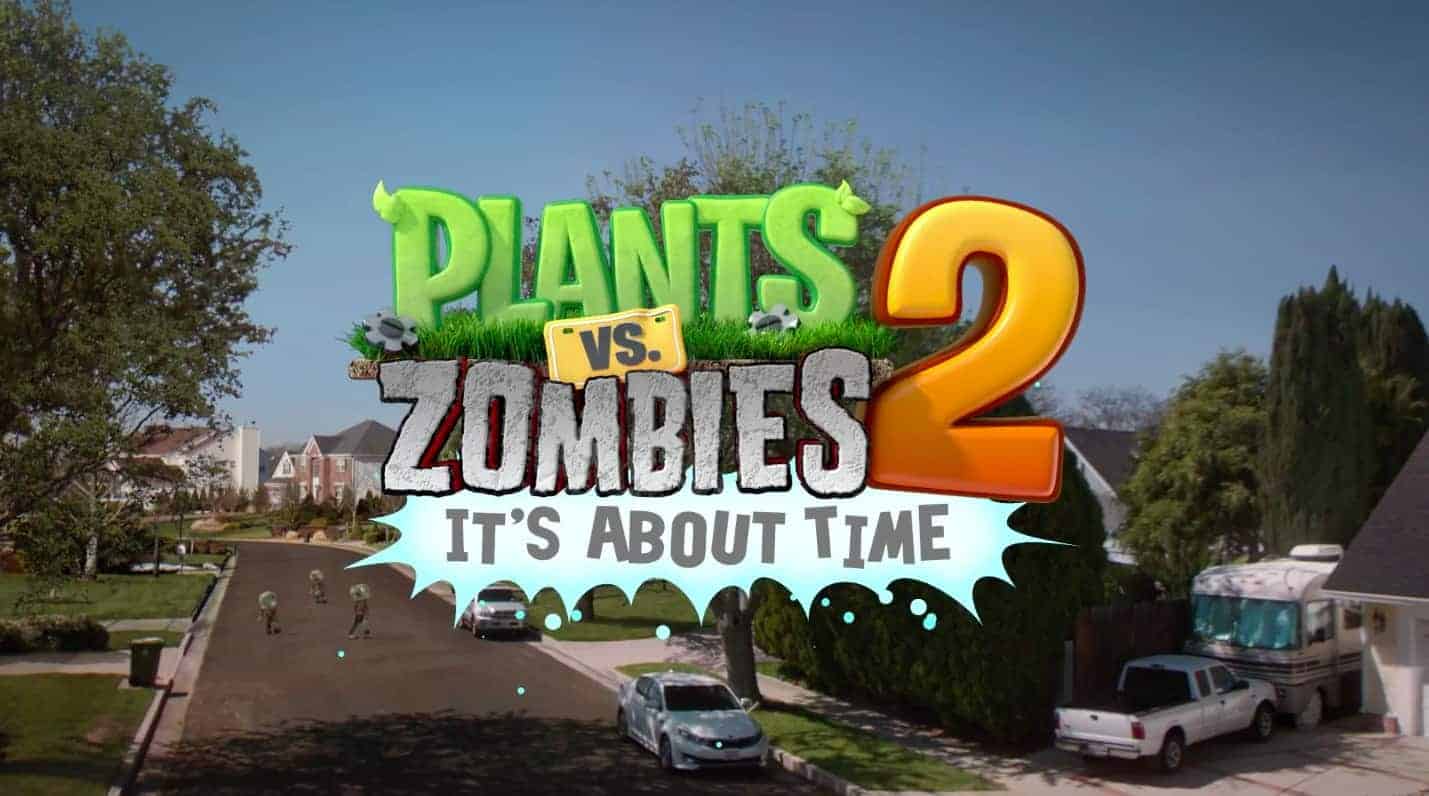 The original was a hit, across multiple platforms to boot. So is it any wonder that the sequel will undoubtedly follow in its footsteps? The global release so far has been short lived but Plants VS Zombies 2 is already making waves in the Android gaming community. Some good and some bad, the reviews seem to point more to a positive response than a negative one. Just earlier yesterday morning it was at a 2.9 rating and in only a few hours it jumped to a 3.7 and its still climbing. By the end of the weekend its popularity should be in full swing and all those who have yearned, and pined, and waited for what was next in the Plants VS Zombies franchise will have lots to do with the friendly yet ghoulish looking little undead characters. Plants VS Zombies 2 sheds its $0.99 pricetag of the previous game and opts for a free to play model, offering up the ability to speed up in game progression of sorts with IAP. Although this is widely despised by many, more and more games are taking this route as it gives the choice to “purchase” to the gamer at an individual level. My two cents… just download, shut up and enjoy.

Ever since the fateful teasing Facebook post last year from Madfinger Games about their upcoming Zombie shooter sequel, Dead Trigger 2 has taken over my thoughts and invaded my dreams. After long nights and plenty of waiting, Dead Trigger 2 has arrived just in time for the spookiest holiday of the year. Graphics that will make your jaw drop along with plenty of new game content updates that weren’t in the first game will most certainly please anyone who loved the original Dead Trigger. New weapons, vehicles, airplane gunners, chicken bombs, and much more are just some of the new updates. So far my I’m lvl 14 and all told I have played about 4-5 hours of Dead Trigger 2 since its release just a couple days ago. My weapon of choice is the knife which i love to use to cut down those mindless undead bastards. Some not so good changes include time production for items and weapons and of course there is no way to gain gold coins in the actual game itself during play. At least not so far. Madfinger is usually very responsive to their fans and pretty good at making needed changes that are wanted by the majority of the gaming community. Dead Trigger 2 is all that needs to be happening on your tablet or phone this weekend(and possibly the entire rest of the month) so go and grab this game for free now. Dead Trigger 2 is without a doubt the best zombie game of the year and possibly the best FPS. Here’s to you Madfinger and keep the good shit coming!