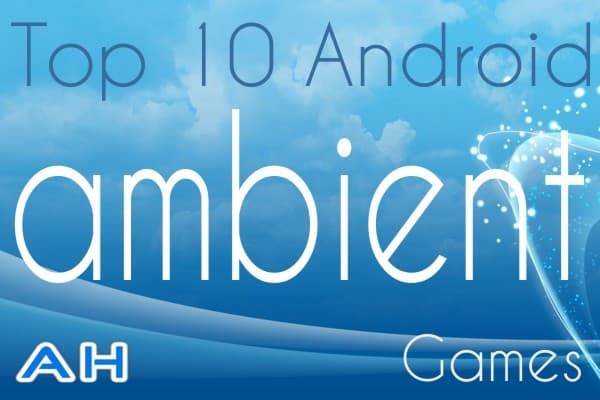 Ambient games are games that have ambient music soundtracks, giving the game an atmospheric style of play that usually immerses the gamer further into the game and may effect there mood to a more calm state of mind.Sit back , relax and enjoy your gaming pleasure with these cool and relaxing style games.

If you could dream of pushing a block around a giant universe of shapes and geometric surroundings, you’d be living Edge Extended. All you would need is an awesome soundtrack to match that of which is playing ever so calmly in the background of this game. Remember playing with blocks as a kid? Well think of this as a digital and extremely more enhanced version of that with cool music, yet way more fun. There’s a reason Edge Extended was part of the third Android Humble Bundle, and it isn’t just because this game was indie. It’s renowned for its use of hypnotic ambient music and challenging but also fun puzzle aspect. It was also just updated with a new 3D graphics engine so it looks even better. If you like to give yourself a challenge, you will love pushing this little block around and find it difficult to stop.

Only the best minds succeed in warfare. The same is true in Auralux as it is on the battlefield. Auralux is a beautifully blended mixture of challenging and visually stimulating levels where you need to make precise and correct decisions based on strategy to succeed and come out on top. Every move you make has an adverse effect and may hinder your ability to move forward or it may just save the day. The game is played completely to the tune of ambient music. The game pulses with the tracks, and choices you make evoke sounds that blend into the background melodies. Its truly a work of art. The game is free to try. If you like the game and want more levels and more challenges than you can purchase the rest of the levels for a small in app purchase. One that is well worth it. 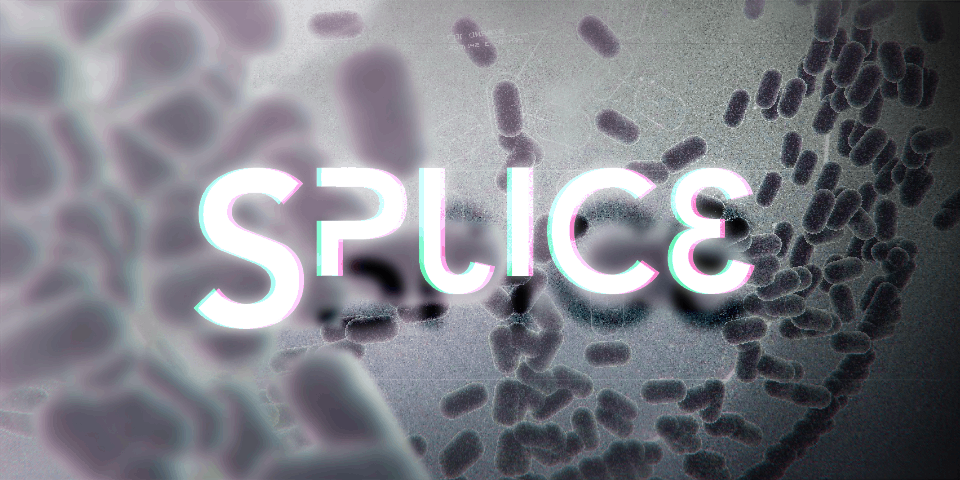 If you’ve ever wanted to try your hand at re-arranging cell structures but just don’t think you have the knowledge or educational background to do it for a living, Cipher Prime Studios has your back. Splice is a uniquely crafted puzzle game where you’ll be re-arranging and “Splicing” strands of cells together in just the right way to complete each puzzle. The levels in the game which are called “strands”(and rightfully so) will pose quite the challenge as the developers suggest, but accomplishing such feats required to move onto the next strand will leave you feeling pleasantly blissful on a mental level, and help you exercise your ability to predict and visualize sequential series of shapes over time. If you’re feeling mentally buff, throw on your headphones and spend a few hours with Splice. 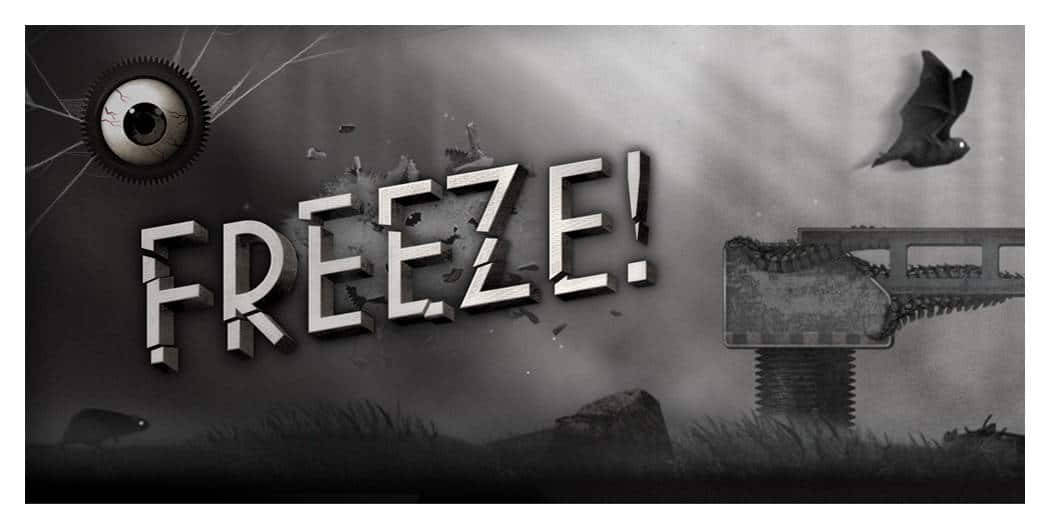 Freeze! challenges you to help the games eerie but loveable hero (simply an eye) escape his fate and return him to happiness. You’ll be tasked with solving a series of puzzles by twisting the cell that contains our games main character(and really only character) to help him get out of imprisonment and one step closer back to where he belongs. Doing so seems like it may be easy at first, and it may be, but simply turning the cell around isn’t all you will have to do. You’ll have to make use of the games freeze button to complete each stage, and utilizing this in combination with each cell our hero is stuck in is what will get increasingly more difficult. This unique new play style for a puzzle type game is rounded out by hauntingly beautiful black and white artistic backgrounds to paint an immersive spooky world, and finished off with equally sinister sounding music composed by a notable swiss electronic/trance musician. Freeze! Stop what you’re doing and give this game a try before you waste one more second not playing it.

If you can’t find the time to meditate perhaps you can make time with Zen Bound 2. This puzzle game is one of meditative roots with a very calming and soothing soundtrack that just might make you feel more refreshed than before you began playing. The goal in Zen Bound 2 is to find a way of wrapping a rope around each levels wooden or stone made statue correctly before you run out of rope. The game was designed to make the wood, stone, and rope feel real and believable as if it were in front of you. The game’s developers;Secret Exit, have included all original Zen Bound levels, some redone with new gameplay and others just updated with better graphics as well as added in tons of new content. This is probably one of the most peaceful games you’ll ever play on Android.

Spirits made it’s debut on Android via the Humble Indie Bundle many of us gamers are familiar with. It was the winner of the Indiecade “best aesthetics” award in 2010 as well as Sense of Wonder Night Collection at Tokyo Game Show in Japan the same year, and Winner of Best Mobile game and Honorable mention at IGF 2011. Spirits is a wonderful journey where you must help guide the spirits to their destination by using creatively placed actions to indirectly move the spirits from one end of the level to the next. You will start with a fairly larger number of spirits at the beginning, and you can sacrifice each spirit to complete a certain action that could help you get the rest of the spirits home. Carefully planned out choices are key, but there are multiple right ways to complete each level. You won’t have any direct control over the movement of the spirits but you can dictate how you change the levels landscape or the direction the wind is blowing. Spirits is beautiful and challenging enough to get you started, but its the clever and intuitive nature of the game paired with a melodic soundtrack that will keep you playing. 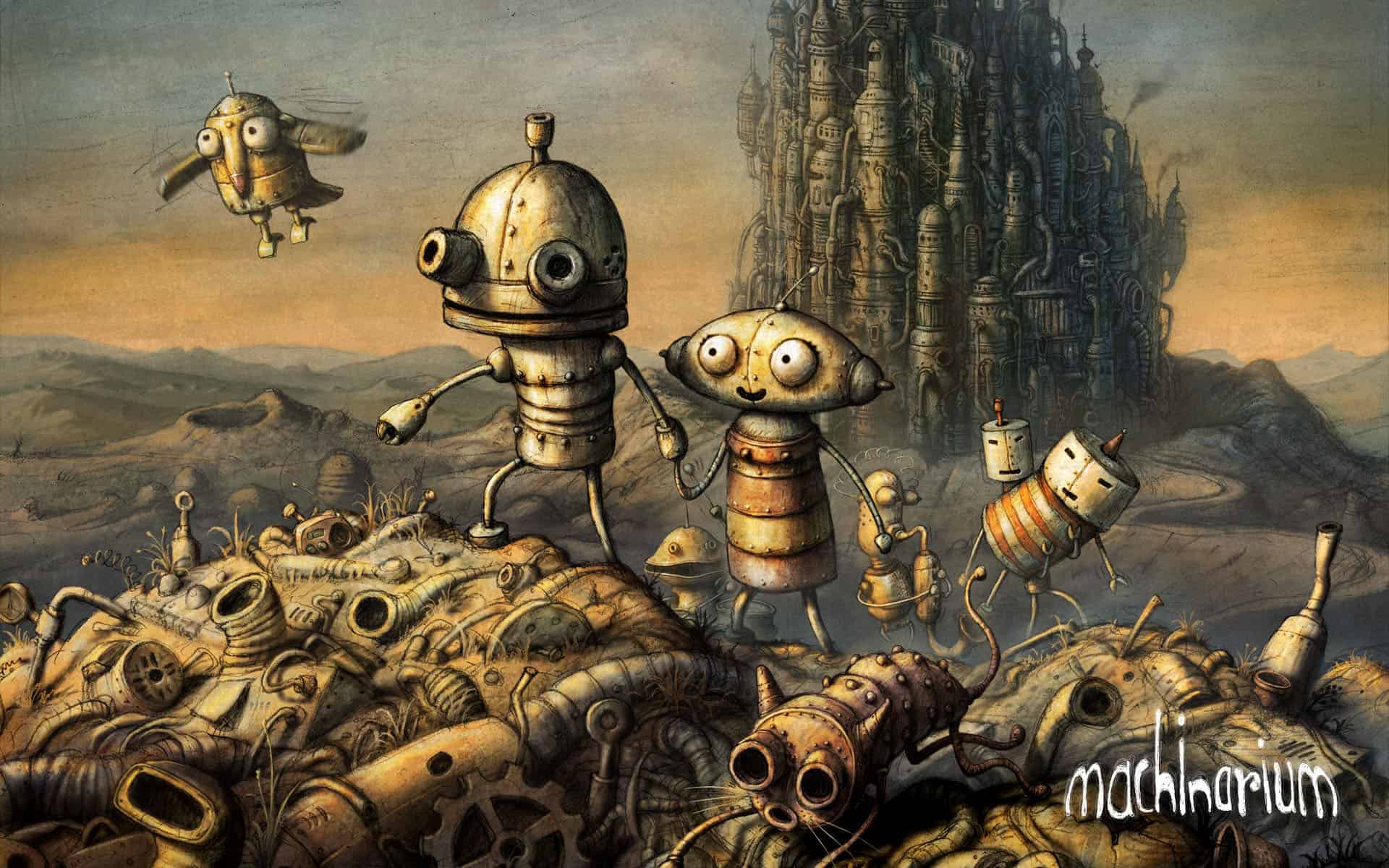 Imagine you’re a friendly little robot who just wants to spend his days with his beloved. Everything is perfect until she is taken away from you. Machinarium is an imaginative puzzle game that is set in a steampunk themed world ran by robots. You’ll traverse traps, enemy robots, and various dangerous landscapes in this amazing and original adventure all to save the one who holds your robotic little heart. The striking visual art style and challenging puzzles will have you scratching your head for hours just to figure out the next move. The proud sense of accomplishment you get from overcoming the many obstacles within the game is surpassed only by the wonderful music and overall tone and setting itself. Machinarium is a beautiful and exciting journey. One that is definitely not to be missed. 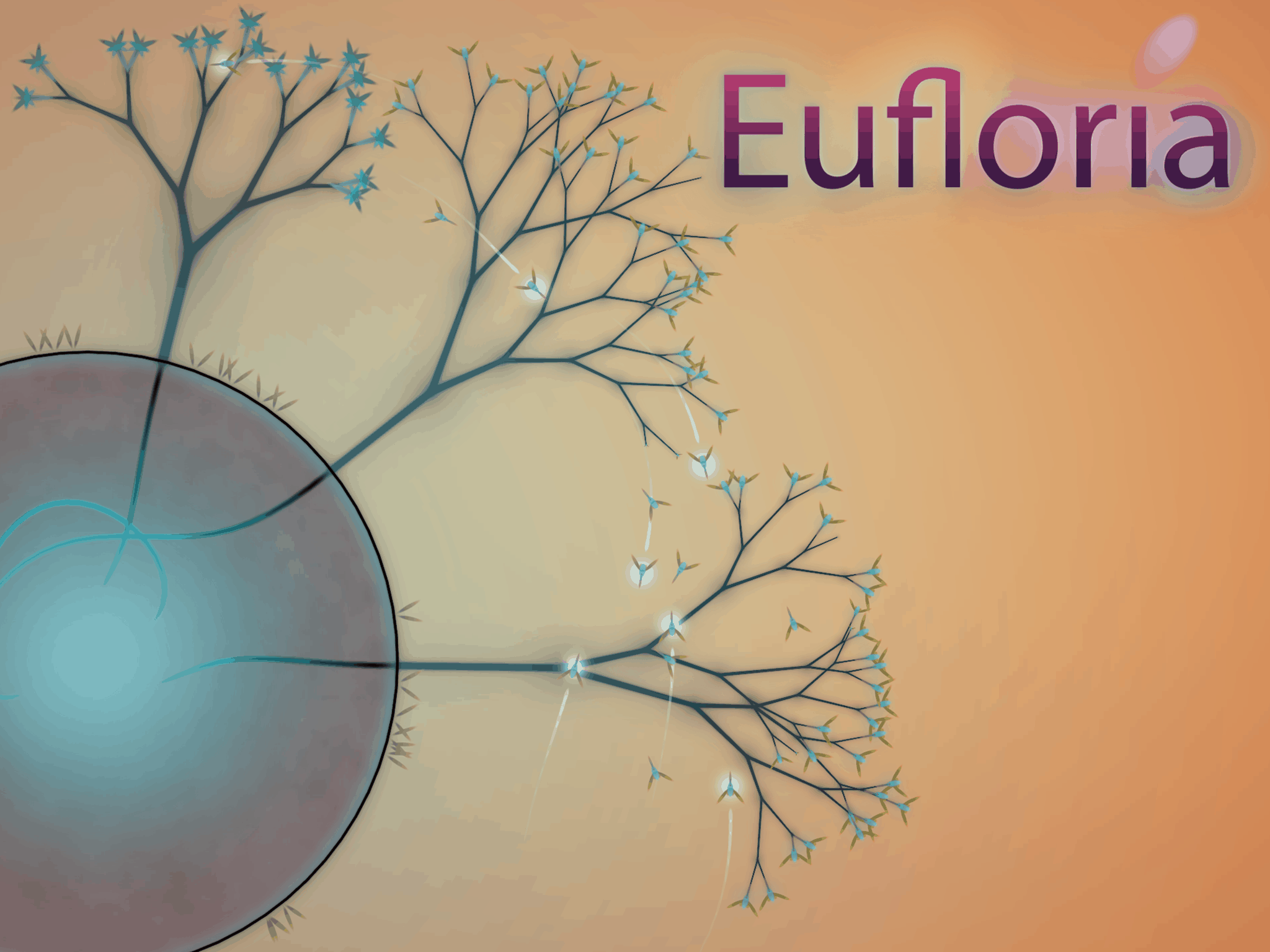 Eufloria HD is without a doubt one of the best games I have ever played on android. This unique strategy game with RTS elements is sure to take up a huge chunk of your time. The soundtrack helps to immerse you into the gameplay, which is always a wonderful idea, but its the gameplay and concept that are the real stars here. In the world of Eufloria, you must command your army of bio mechanical troops during your exploration of the universe. Travel through space and take control of undiscovered asteroids for control of the resources it holds. You’re not alone though. Ai controlled opponents all want the same thing as you and will stop at nothing to get it. Battle many different types of enemies and protect your own semi-organic planets from destruction. Cultivate plant growth to gain new units and resources that could help you against the hostile creatures. Eufloria HD is a game of carefully planned strategy, but don’t let that deter you. You’ll fall in love with everything is has to offer and wish you had more to play once you’re finished. 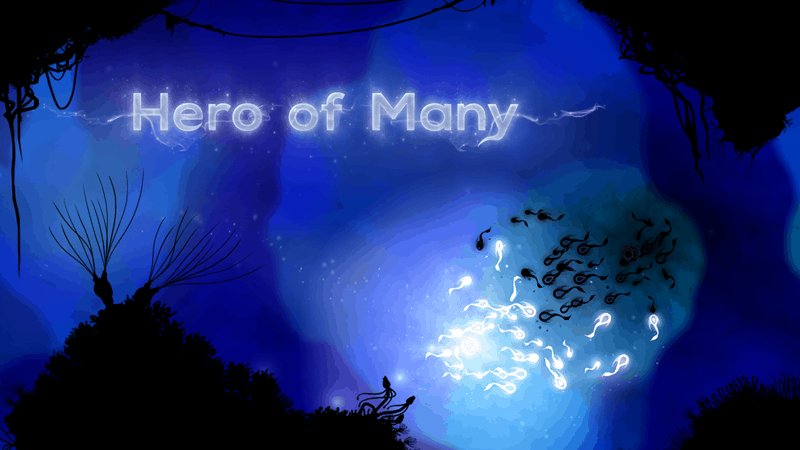 Everyone wants to be a Hero. Well now’s your chance to be the hero you always wanted to be. This surreal adventure takes you through multiple beautiful but dangerous worlds where you must help a swarm of water beings overcome impossible odds. Lead them to safety while escaping from monsters and facing different challenges. You can learn new powers to help you save your friends, and you’ll travel through some pretty amazing places while doing it.

This story driven puzzle game is one of intriguingly epic originality that tells the entire story without any words at all. It has a completely original audio soundtrack(just like virtually every game on this list) that helps to sync you up with the game emotionally. Hero Of Many is a unique experience that proves to be one of the best games of 2013.

It’s no surprise why Osmos HD received the award for game of the year and many different recognition’s from various publications and gamers. Once you start playing, it’s easy to see what all the buzz is about. In the world of Osmos, you are a single organism that strives to grow and be the biggest. You’ll have to float through and past hordes of other organisms and absorb the ones that are smaller than you to become bigger and bigger. Watch out for the ones that are bigger than you though as they will attempt to eat you up or suck you in. The game utilizes a finely crafted multi touch control system that allows you to do things like speed up and slow down time while you travel through the muck. The time warp feature can be crucial to obtaining your goal, but is also a fun factor. There’s plenty of replay value with 72 original levels across 8 different beautifully imaginative worlds. Once you finish those, challenge your friends in the all new multi-player via local wifi or through google play games(wifi only), or play a remixed version of any level in arcade mode. To experience the game at the height of its utmost potential, play with headphones and sink into the ambient background tracks. Osmos HD will put you in a trance deeper than any hypnosis. Try the demo version, once you’re hooked, pick up the paid version to get all the extras.