On Tuesday, Google had a little Google+ event (which we still find strange that they had a Google+ event but not an Android event) where Vic Gundotra and his team went over some of the changes to Hangouts and of course Google+. However we are focusing on Hangouts since we now have the APK!

This new version of Hangouts includes SMS integration, the ability to send animated GIFs, Hangouts on Air updates, more photo tools and even more. There’s also location sharing, which I probably won’t use too much, but it is there. The big thing here though is SMS integration. Although it doesn’t work with Google Voice unless you’re on Sprint, thanks Google! 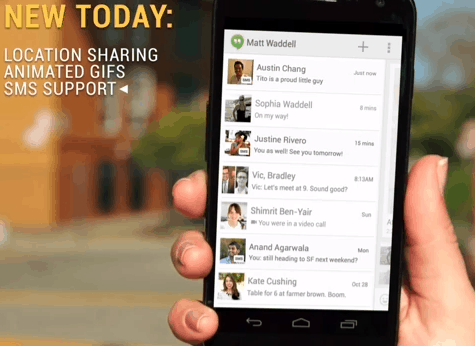 Usually Google will update their apps in staged rollouts. However with this one they haven’t even started the staged rollout yet. That’s not slated to happen until a week or so from now. But the Hangouts app is available on the Nexus 5, which means it’s in the Factory Image that just went up about an hour or so ago. So thanks to our friends at Android Spin, we’ve got the APK to share with everyone.

You’ll install this one just like any other APK. Just download it on your phone or tablet. Make sure ‘Unknown Sources’ is checked in the security settings, then tap on the APK, and hit install. It will install over your older version of Hangouts. But its just that simple. We’ve got the apk down below for you to check out and download if you’re interested.

Finally we can have SMS inside of Hangouts. It’s about freaking time. I still think this should have launched with Hangouts at Google I/O back in May. Anyone agree? Anyways let us know in the comments below how you like the update.