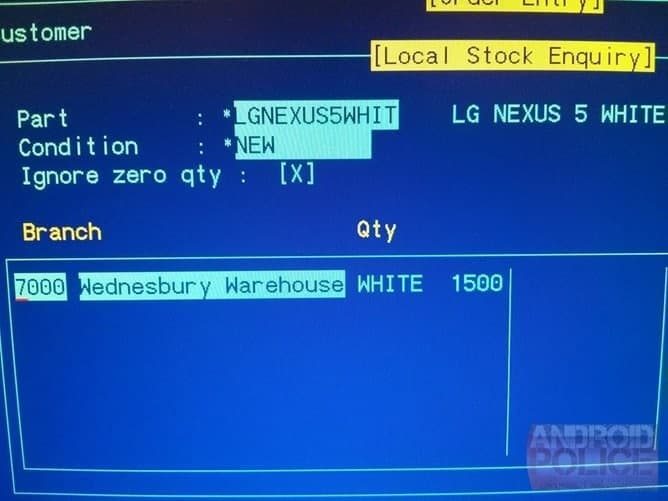 Well this definitely means the Nexus 5 launch and announcement is imminent. Of course the Nexus 5 and Nexus 10 showing up on Google Play again this morning also kinda confirmed that. There's a leaked screenshot that popped up from Android Police this afternoon that shows Carphone Warehouse, one of the biggest phone retailers in the UK, has about 3000 Nexus 5's in stock.  While the screen only shows 1500 White Nexus 5's, Android Police was also told there are 1500 black units as well. Which my math is a bit rusty, but I believe that equals 3,000.

These types of leaks happen all the time. In fact, we almost know exactly how Carphone Warehouse's system UI looks like. They have this blue-yellow interface which is shown above. Since their screen was also leaked last year in all the Nexus 4 leaks. The search done in the screen above shows that there are 1500 Nexus 5's in White at the Wednesbury warehouse. Which is a real Carphone Warehouse location. Leading us to believe that this is a real. Or  a really good fake.

It's hard to tell if these are all the units that Carphone Warehouse has or if that's all that's in that location only. However, I don't think 3,000 is enough. We all know how quickly Google and other retailers sold out of the Nexus 4 last year. I kind of expect the same thing. I mean if Carphone Warehouse has 3,000 units, how many does Google Play have for each region? I really hope that Google learned their lesson last year and have added in another server for Google Play so it doesn't crash as much as it did during the Nexus 4/10 launch last November. Remember all those people getting charged multiple times for their Nexus 4? Yeah, I hope that doesn't happen again.

How many of you in the UK are looking to pick up a Nexus 5 soon? Let us know in the comments below.