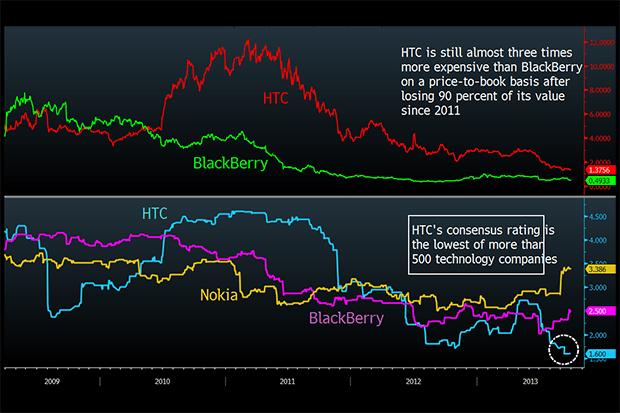 Here's some interesting news, that we pretty much already knew, about HTC. HTC has been struggling for quite some time. In fact, it really all started in 2011 when HTC basically rereleased all their flagships with very minimal upgrades and zero marketing. While Samsung was running all the "Samsunged" ads targeting the Apple users. Now, according to Bloomberg, it looks like HTC might be following in the footsteps of Nokia and Blackberry. The Taiwanese-based OEM has been losing their market share at an alarming rate. Bloomberg is reporting "the smartphone maker lost 90 percent of its market value since 2011", but it's still too expensive to be considered for a buyout or a merger. Additionally, HTC has a consensus rating of 1.6 out of 5 from analysts in the industry, that's much lower than both Blackberry and Nokia.

It wasn't too long ago when we reported on the net loss that HTC might be facing this quarter, and following what Bloomberg is stating this afternoon, "an eighth straight drop in quarterly sales." Of the 30 analysts that Bloomberg is tracking, 24 are recommending selling HTC shares, and five of them are saying hold and only one has a buy rating on the company's stock.

With many executives leaving the company, and the revenue dropping quickly, the current 2.8% market share of HTC smartphones isn't looking to go up anytime soon, unfortunately. Unlike Blackberry and Nokia, HTC isn't sitting on a big pile of cash, as they are a fairly new OEM compared to those two. I really like HTC's devices, but the way they are running their company right now isn't the way it should be run. I really want to support them, but it's getting harder and harder. And I know I'm not alone with loving HTC and their products.

Is it too late for HTC? Should they just start looking for a buyer? I think it would be great for Samsung to purchase them. Imagine having HTC's build quality with Samsung's software (even though I don't like Touchwiz, it has a ton of features that get used).