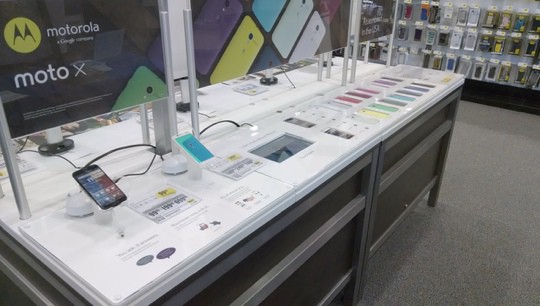 Just yesterday, we heard that Motorola had dropped the Moto X pricing (at least for the AT&T model) to $99 on contract. Which we had actually heard rumors that it would drop to $99 in Q4. Which is pretty normal for a phone that's been out for a few months. As carriers have to start making room for more phones which will be coming out.

Currently only AT&T has the option for a customized Moto X through Moto Maker. We've also heard rumors that will open up to the other carriers soon as well. We believe that Motorola gave Moto Maker exclusivity to one carrier so they could get their factory up and running smoothly, before they opened it to all four carriers. Now it looks like the Moto Maker kiosk is coming to more retail outlets very soon, as we are seeing them pop up at Best Buy locations now.

Best Buy has been selling the cards to get a customized Moto X from the Moto Maker website. But now they appear to be setting up the kiosks that you see at AT&T stores now. We aren't sure how many Best Buy locations will have it or if all locations will have the kiosk. I'm not sure if Best Buy mobile stores will have it since they are generally very small, at least in my area.

With Moto Maker you are able to change the back color, the accents and a few other things. Including changing the boot up text (hopefully engraving will come back soon as well). You can also decide which accessories you want to buy, as well as sign in with Google so that your Moto X will come all loaded up and ready to go! It's a pretty cool experience and something I wish more OEMs and carriers did, but I have a feeling that will change soon.

Advertisement
Trusted By Millions
Independent, Expert Android News You Can Trust, Since 2010
Publishing More Android Than Anyone Else
20
Today
20
This Week
302
This Month
4286
This Year
105763
All Time
Advertisement