Apple may have a tablet event today, which will probably boost its tablet sales for a quarter or so, but if this BusinessInsider chart is anything to go by, that won’t last long, as Apple has already been seeing a sharp decline in tablet market share over the past several quarters.

It seems the biggest decline started in 2012, in the 3rd quarter, which seems to be exactly the quarter of the Nexus 7 launch. Asus saw a pretty significant increase in sales then, thanks to the Nexus 7, but I think that besides the Nexus 7 selling relatively well, it also managed to push the whole Android tablet market, and make Android tablets seem viable. 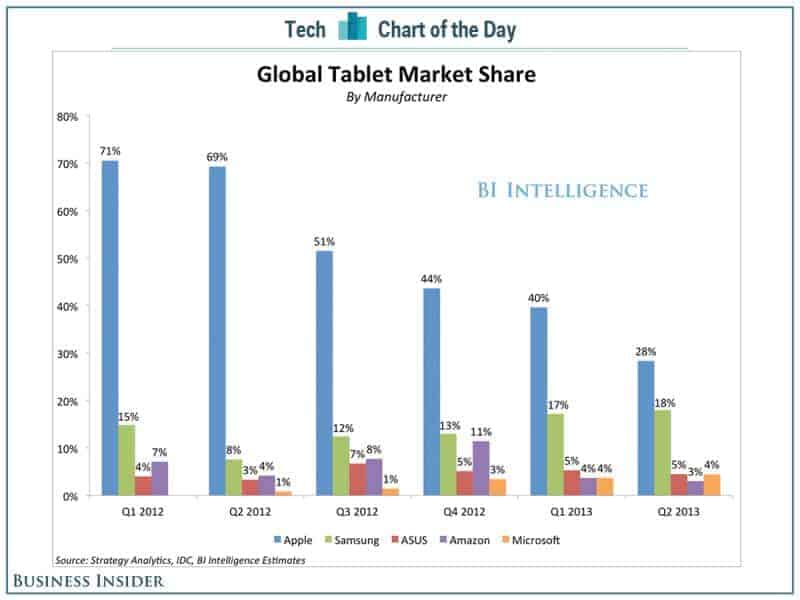 Since Samsung is the one spending the most money on promoting its products on the Android camp, I’m not surprised to see that they’ve benefited the most from Apple’s fall in the tablet market. Samsung is also seen as the main alternative to Apple in the consumer market, and if people don’t like Apple’s products for whatever reason, they tend to go to Samsung. Samsung has kept strengthening its brand over the years, and it has paid off, because a lot of people have a default alternative to Apple now, if they trust other companies less.

Asus seems to have remained stagnant in sales over the past year (before the new Nexus 7 launched). Asus doesn’t seem to have found its own brand yet, and it could be because of how confusing they tend to make its brands. Until they do that, I don’t think they’ll see a lot of success in the tablet market. Plus, this should be the last year Google is using them for the Nexus 7, with LG rumored to be the next partner (perhaps for a Nexus 8?), and Asus will be on their own after that, so they need to figure things out fast.

Samsung hasn’t had a huge amount of success with its larger 10″ tablets, either, though. For some reason, they keep messing up the Galaxy Note 10.1 tablets, as it always seems to have performance issues. I don’t know if that’s because they have a less good team working on the software for it, or what’s going on, but if they want their success to accelerate in the tablet market, they need to figure that out fast, by the time they launch a new tablet (perhaps the rumored Galaxy Note 12.2?).