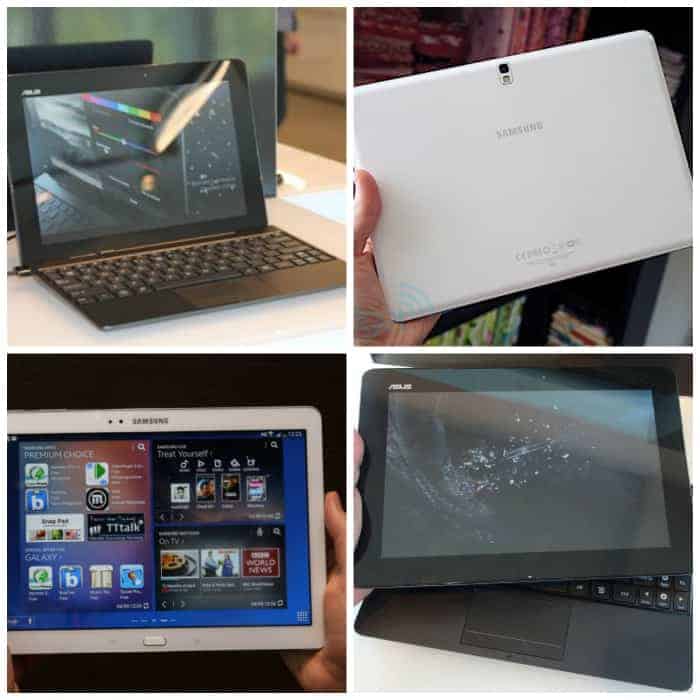 Here we've got two great looking 10-inch tablets which are going to battle it out today to see which one is the best. Each has their own advantages and disadvantages. Like the Transformer Pad has the dock which comes with it this time, instead of older versions where it's sold separately. While the Galaxy Note 10.1 2014 Edition (for the rest of this post will be referred to as "Galaxy Note 10.1" or "Note 10.1") which has the S Pen and all the features for the S Pen, which many of us love. So let's jump right in by looking at the specs for each device. 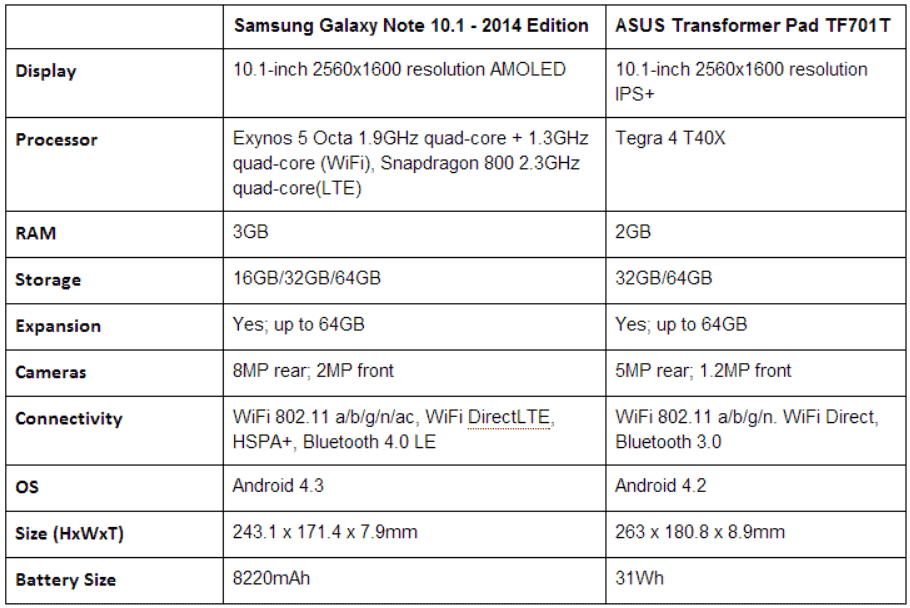 Galaxy Note 10.1: The hardware on the Note 10.1 is really great. I actually have one here that I'm in the middle of reviewing as I write this. Usually Samsung gets knocked down for using plastic on their devices, but they finally got away from the glossy plastic and added faux leather to the back of it, which makes it look really nice, in my opinion. As you can see from the table above, the specs are pretty good. 3GB of RAM on a tablet is pretty insane, especially since it's not running Windows. Then there's the S Pen, which I really do like. And Samsung has done a great job in adding more and more features for the S Pen to utilize in this year's Note 10.1.

Transformer Pad TF701T: I haven't held the TF701T yet, mostly because it's not available in the US yet. But if it's built anything like ASUS' older Transformer tabs, it'll be built very well. Additionally it has the keyboard dock which is very nice, and it adds a USB port as well as about 6-10 more hours of battery. Who would complain about that? As well as keeping the version of Android that's on board near stock Android. ASUS does have a few differences, but there's not too many.

Advantage: Galaxy Note 10.1 (based on specs)

Transformer Pad TF701T: The TF701T is only listed as 31Wh, which my math is a bit rusty, but I believe it's a bit higher than what the Galaxy Note 10.1 has. Now since this one isn't out yet, we're going to leave this section as a tie.

Advantage: Tie (based on the differences in battery measurement) 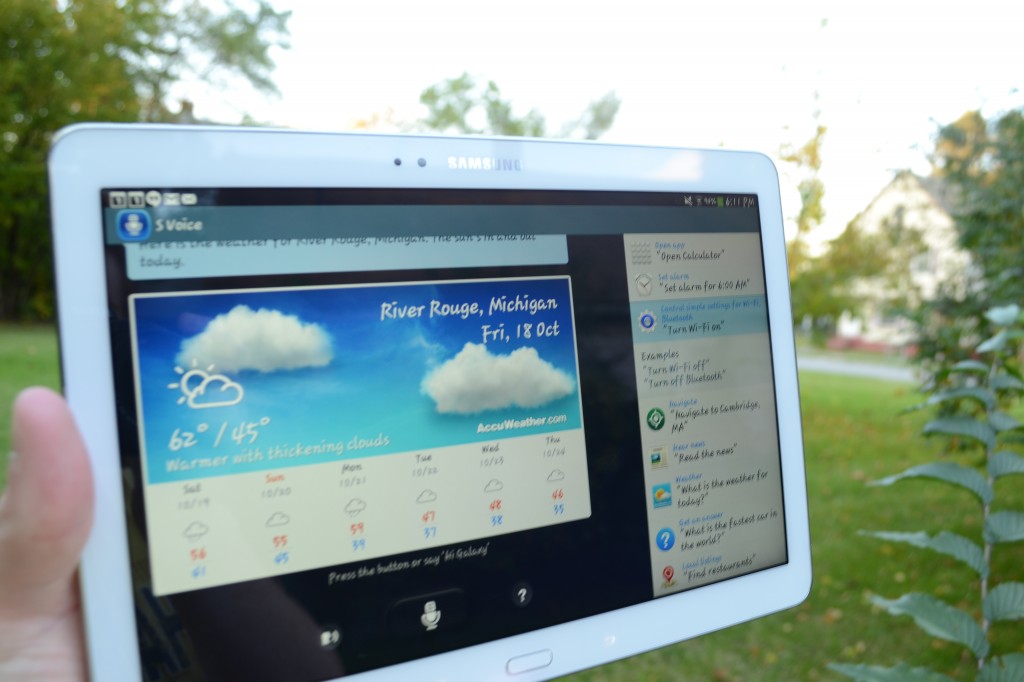 Galaxy Note 10.1: The Galaxy Note 10.1 has a ton of software. We all know that Touchwiz is huge. So why do we keep buying it? Well because they have a ton of features that we love, even if we hate how bloated it is or how nasty looking it is. In the Note 10.1, Samsung has added features like Air Command, Air View, Pen Window and even updated the Multi-Window, so it's much better. I reviewed last year's Note 10.1, and multi-window on that thing was not a good experience at all. It's much better, in fact words can't describe how much better it is in the second generation.

Transformer Pad TF701T: As far as software goes, it's basically stock Android 4.2. ASUS does have a few features added in. But there's no where near as many as what Samsung has on the Note 10.1. It's good to see ASUS keeping their skin light, but I'd like to see a bit more features that can help distinguish it from the Nexus 10, especially if they are the ones creating the Nexus 10 this year.

Galaxy Note 10.1: I don't know about the rest of you, but rear facing camera's on a tablet are not really that important to me. Sure I still review them in my reviews, but I don't expect a whole lot from them. Now the front-facing camera is the one I really expect a lot from. The camera's on the Galaxy Note 10.1 are actually pretty good. So if you need to take a picture and don't have your phone handy, I think it would work just fine. The front-facing one is pretty good and clear as well.

Transformer Pad TF701T: On paper the Galaxy Note 10.1 has better cameras. 8MP in the Galaxy Note 10.1 and 5MP in the Transformer Pad TF701T, but that doesn't necessarily mean it's better. However in this case it does. ASUS generally has adequate front-facing camera's, even if it is only a 1.2MP camera. I'm still waiting on someone to bring out a 5MP or higher front-facing camera. Maybe a 20.7MP? 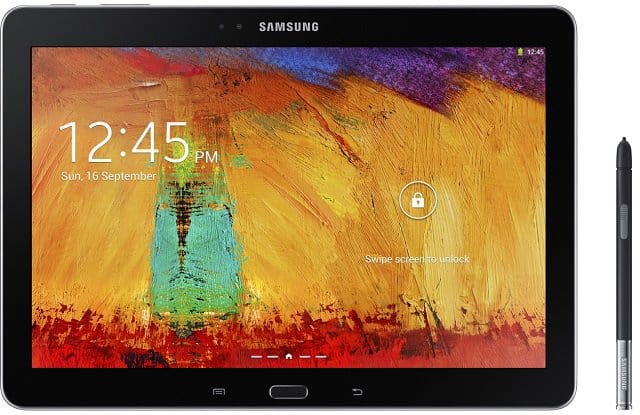 Transformer Pad TF701T: The TF701T has the same resolution, but it's an IPS+ display. Think of the LG G2's display, but more pixels and 10.1-inches of it. Which means bright and vivid colors. Personally I like the IPS+ displays better, which if you put up the G2 next to the Galaxy Note 3, you can see that the G2 is a bit better.