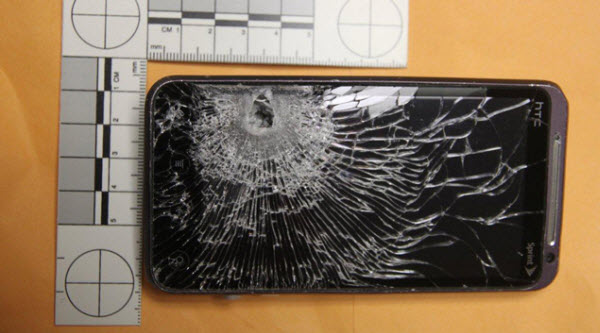 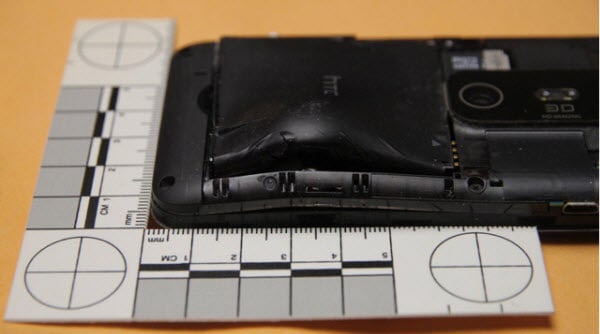 Talk about taking one for team – CNN reported that an Orange County, Florida Hess store clerk was shot in an attempted armed robbery and the bullet was stopped by his HTC EVO 3D smartphone stuffed in his shirt pocket and that it probably saved his life!  This only validates why I carry my Samsung Galaxy Note 3 (large protection) in my shirt pocket and why I will ONLY buy a new shirt with a pocket – and my wife thinks I am crazy, ha!

Apparently the suspect asked for help in finding a drink and then pulled out his gun and ordered the gas station clerk to open the safe, but he was unable to do so.  Another clerk arrived and was ordered to open the same safe, and when they both failed to do so, the gunman fired a shot as he left the store.  It was not until the Emergency Services personnel arrived that one of the clerks complained of chest pains and upon further examination, they realized he had been shot, but his smartphone had stopped the bullet from entering the clerk's chest…like sort of flak jacket!

You can see from the above pictures, the front of the phone where the bullet entered and the rear of the phone bulging out where it stopped the bullet…was it part gorilla glass and part battery that helped stopped the force of a bullet traveling that fast.  We may never know, but we do know that clerk should be given a new phone at no cost!

He was quickly checked out at the local hospital and then released.  Winter Garden Police Lt. Scott Allen said, "I've seen individuals get shot with low-caliber handguns and I've seen it be life ending. So, for this gentleman to be as lucky as he is, it's a good day for us."

A "good day for us," I think the officer means that it was a good day for the clerk!  It is also lucky for the gunman as well – an attempted murder charge is better than a murder charge!  So far, the suspect, that got away on foot, has not been captured.  This is just another example of how technology helps us in our everyday lives…and a good reason to keep you cell phone in your shirt pocket at all times.