Low-cost Android phones have led to a new generation of smartphone owners worldwide, resulting in a record-breaking increase in smartphone sales across the board. The International Data Corporation reported Tuesday that the global smartphone market grew by 38.8 percent during the third quarter of 2013 – breaking the existing record for units sold in a single quarter by more than 9 percent. Making up 55 percent of mobile phone purchases, the market has seen a two percent increase over Q2 for smartphone purchases verse standard mobile phone purchases. An overall growth of 5.7 percent over last year is evidence that more and more people are beginning to adapt to the lures of the 21st century. IDC program director Ryan Reith said the increase shows “real momentum of the smartphone market,” and expects it to continue into the fourth quarter.

Reith contributed the increased momentum to the influx of opportunities made by the Android operating system. The open source OS has allowed a variety of manufacturers to compete in the smartphone market by producing affordable, quality devices. One third of all smartphone devices were built in China this quarter, making the country one of the fastest growing smartphone markets in the world. For example, the increased popularity of Chinese manufacturers Huawei and Lenovo allowed the companies to move ahead of LG in the ranks as the third and fourth top smartphone manufactures, respectively. Several other Chinese companies, including Coolpad and ZTE, are following suit and according to the IDC report, could be in the top five come next quarter. 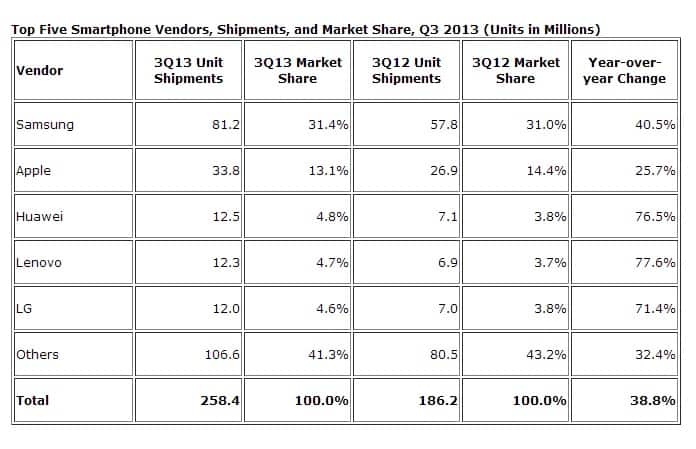 Maintaining its leadership position since the first quarter of 2012, Samsung shipped more smartphones than all of its major competitors combined. Topping well over Apple, Huawei, Lenovo, LG and other manufacturers, Samsung sales contributed to 31 percent of the 258.4 million units sold this quarter. Samsung’s best sellers included the Galaxy S4, the Galaxy S III, and the Galaxy Note 3. According to the report however, the reason for Samsung’s top ranking is due to its long line of average consumer smartphones.

Trailing along in second place once again, Apple cornered only 13.1 percent of the market share. In its Q2 report, the IDC speculated that Apple might gain leverage with after releasing its lower cost iPhone 5c, however, this simply was not the case. Higher than expected costs of the 5c left consumers uneasy, and sales were not enough to increase Apple’s market share.

Huawei was knocked out of the top five list last quarter and replaced by ZTE, however this quarter it has regained standing and barely toppled over LG for third place. Lenovo came in closely trailing behind at a controlling stake of 4.7 percent, and was able to maintain standing as fourth in line. With an increase in 72.2 percent, LG’s year-over-year growth is impressive, however its current growth was not enough to keep up its ranking. Instead, the company ended up last in the line with only a 4.6 percent market share.

The IDC noted that the common thread among top manufacturers is Android. Although it will be hard to convince an iOS fanboi that his or her favorite operating system no longer corners the market, the statistics speak for themselves and the proof is in the pudding.