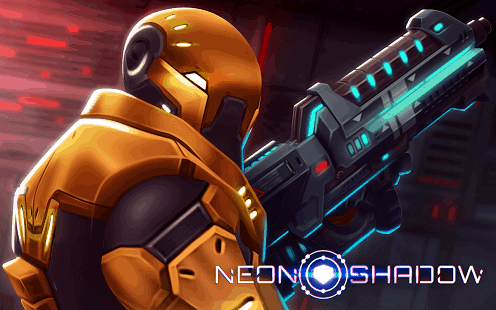 Inspired by classic shooters of yesteryear, or days of old, or yore, or however the hell you want to refer to it, Neon Shadow by Crescent Moon Games and Tasty Poison Games is a cyberpunk themed First person shooter that takes on an almost Doom or Wolfenstein feel, just without all the demons and nazis. The story behind Neon Shadow is that evil mechanoid robots have taken over your space station and their ultimate goal is to eventually take over the galaxy. Who could have guessed? Evil robots wanting total control? It's crazy but it's true. You can immerse yourself into an epic story driven campaign mode or skip right to the fast paced multiplayer action in multiplayer mode, where you will go head on against other players in online matchups. Pretty self explanatory but there you have it. If you're craving some old school FPS action, than Neon Shadow should definitely be on your list of games to play this weekend. The campaign looks promising, and you can go head to head in online multiplayer or LAN matchups(basically just local multiplayer over wifi) if you so choose. You can even play same device co-op on tablets! Pretty damn awesome feature. Neon Shadow supports google play games services. So you know what that means. Achievements, leaderboards, and most notably cloud save support should be there as well. Or so I hope. The game seems to have a fairly decent following of happy customers even for only being out just a few days. A slew of control schemes are available to give you a choice on how to play. You can use the on screen touch controls, or utilize the gamepad support of which, at first glance seems to only support the MOGA Pro and Gamestop Red Samurai, but I'd bet that any HID bluetooth gamepad would work. All in all Neon Shadow seems like a pretty solid game and is a wonderful homage to FPS games we grew up with. It even sports a nice little cyberpunk themed soundtrack which seems to be a hit with players. Now for the news everyone is probably wondering about if they haven't already looked it up, what's the damage on price? Well, Neon Shadow will set you back about three bucks, which shouldn't hurt too much for the nostalgia and excellence in content. Happy gaming everyone and have a great weekend!http://youtu.be/H2d6cAEf85Q