Today, the Nexus 5 was finally, officially announced as not only being a real phone but, one that you’ll soon be able to get your hands on. Whenever Google come out and announce a new Nexus device, a lot of us always think “Hey, I might get one of those this year”. After all, they present great value and they often last far longer than other devices thanks to the amazing update support from Google. When the Nexus 4 launched last year, it was hard to believe that such a device was available for that much but, it was and even now, the Nexus 4 is an admirable device to own. However, the mobile market has moved on and there’s a different set of devices at the top of the ladder for consumers to choose from. 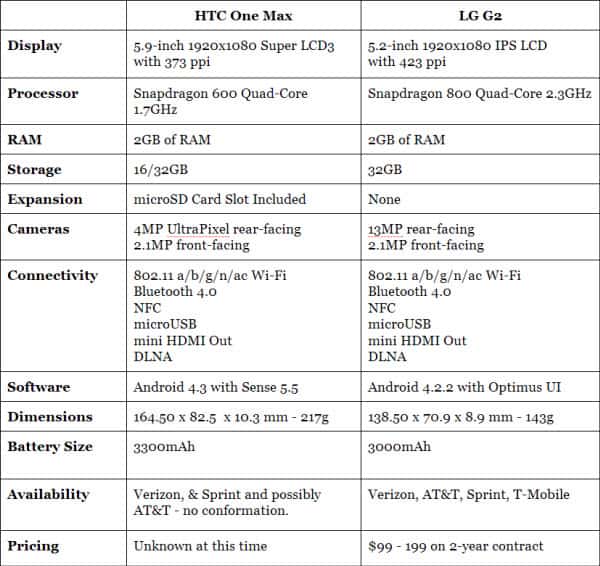 In the table above, you can quickly and easily compare the specs of each of the phones but, we all know by now that specs only tell us half the story. So, below is a quick and handy list of links to Android Headlines reviews of each of the devices listed above. Apart from the Nexus 5, they’re pretty hard to get hold of.

Of course, many of you will know that these devices all offer very different feels as well. For instance, the HTC One has the smallest display at 4.7-inches but, comes with BoomSound speakers which are really quite great so, the One is perhaps more about content consumption thanks to the decent camera, too. Samsung’s Galaxy S4 is more of what we saw last year with the Galaxy S III but, it brings a lot of added software to the table and if you’re just not a fan of stock Android, it perhaps offers the best in terms of software features. Meanwhile, the Nexus 5 may be based on the LG G2 but, they’re very different phones, with the buttons placed at the rear of the G2 and a slightly larger display at 5.2-inches. Capping things off is the excellent Galaxy Note 3 that’s bigger than all the rest. This year, Samsung made a thinner, longer-lasting and much more powerful Galaxy Note and of course, the S-Pen is better than ever.

Whichever device you choose out of these is really up to you and if it’s upgrade time before the year is out or early 2014, you have some choosing to do! Why not swing by our Google+ page and let us know which would be your pick.