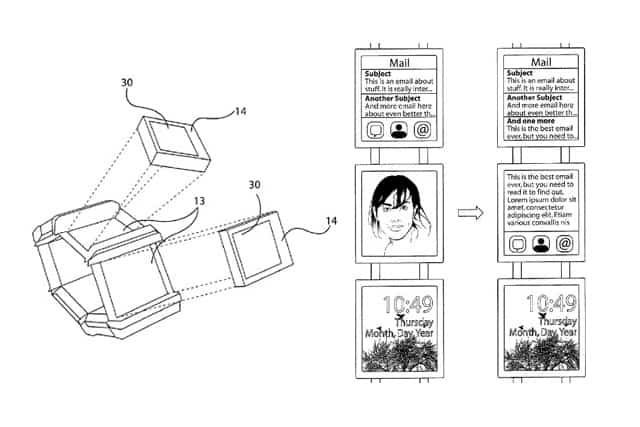 With the official release of Galaxy Gear, the smartwatch industry is definitely up and coming and is making serious progress, getting the attention of many mobile companies. Recently, some of you may remember the contest going around G+ for face design. Well, it seems that Nokia has decided to dip their toes in the water; or rather dive in head first. Their smartwatch patent submission, Project: Facet (technically submitted in August of last year) takes the smartwatch concept and flips it on its head with a multi-functional, multi-screen, multi-faceted… armband? Wristlet? Whatever it is, it's definitely awe inspiring and shows that innovation still exists in the tech world.

Each facet (or screen) is touch sensitive and displays its own application. All you do to view the next facet is turn your wrist. Or better yet, you can swipe the bracelet to move from one facet to another and each facet is customizable to your needs. Another great feature of this possibly absurd device is the use of gestures. You can use gestures to expand an app to multiple displays or just as quickly collapse them.

This concept helps tackle a couple issues with the current smartwatch concept and implementation. First, it assists in alleviating the issue with the size of a watch face being too small for proper or accessible viewing. The ability to expand across watch facets, while not perfect in answering this issue, is a definite improvement. The second issue in question is multitasking on such a small device. With this set-up, you can easily set each facet to your most commonly used apps or widgets for easier access. 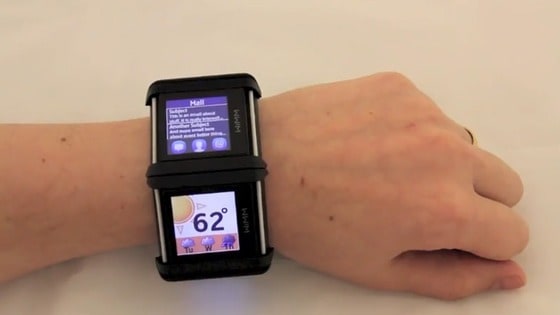 Another interesting concept to this is that the device itself is modular. You can allegedly remove screens out of each segment if you wish. I assume this would be if you don't want or need all the screens attached and wish to reduce the bulk. Note, also, that the watch can be set to activate only the screen that is "face-up". This definitely would help with battery life (as opposed to all screens permanently active).

The Nokia Smartwatch is currently concept only and has not gone into production. Nor is it known if it even will. However, if it does, it can be assumed that it would hold MicroSoft software considering MicroSoft is acquiring Nokia devices in 2014. This also means that there is no idea of what the starting cost would be. I suppose a lot of that depends on when it's released as well. Either way, while there is little more known about the device, it's worth the intrigue it's propagating.

Some of the concerns I would have would be the bulkiness of the device, but if modular, at least I could reduce that appropriately. However, I see a lot of professions and hobbies in which this type of device could be useful. Some ways that I, personally could use it would be aviation, electrical work, theatre lighting design, and conferencing just to name a few. But it's still hard to get over the size. I foresee it getting caught on things, banged against door knobs, etc. Hopefully the glass is tough because of that. Another fear and something that isn't mentioned is water resistance. If it's a watch of any sort, it needs to be water resistant. Something that size is not going to fit under your coat sleeve on a rainy day. One last concern is probable MicroSoft OS. 'Nuff said about that.

All in all, I think it's a beautiful concept and definitely worth the research. I would like to see them progress with this while hopefully considering a more stream-lined appearance. Usually, I end my articles asking your views on the subject of the article. This time, I am simply going to tell you… you know you want one. Or at least you would if it had Android on it.

View the video below for a concept demonstration. If the video is any indication, the responsiveness of the watch is rather laggy, but that can be attributed to the fact that's it's still just concept. I would assume (read: hope) that that issue would be resolved if and when the device is released.