While Samsung is predicting a record third quarter profits of $9.3 billion – this is PROFIT, not merely sales revenue – yet their stock prices remained about the same, indicating that investors were not impressed. Many forecasters, Samsung included, are predicting a slowdown of profits in its mobile business because of the lower margins on mid-to-low end devices that Samsung believes it needs to focus on to increase its market share.

Smartphones have been the key driver of profits for Samsung but with their growth now mainly being focused on the mid-to-lower-end segment, maintaining a status quo seems to be the best scenario for Samsung going forward.

He added that operating profit from its chip business is expected to rise and how well Samsung does will be dependent of their other divisions, such as their processor and memory chips and display segments.

Their reluctance, at least according to Forbes's Haydn Shaughnessy, is that Samsung is trying to emulate Apple and they are not prepared to do so. Samsung's latest attempt is with the launch of the Galaxy Note 3 smartphone and Galaxy Gear smartwatch combo, with the Note 3 the ONLY device it will currently work with and eventually within the Samsung ecosystem, closing the loop to outside phones and devices.

Apple was the first and only device seller to successfully to accomplish this, and their customers are so conditioned to it, they can continue to get away with it, so to speak. Trying to embrace both software and hardware is not an easy task to achieve – Microsoft is trying to do this by going from software products to hardware devices, and we can see how that is working for them.

When we look at a device, we have to understand that it more than just a piece of hardware to send and receive phone calls, it is also emcompasses hardware, software, connections to outside communities, and services, like Apple's iTunes. All of these facets must be taken into account when manufacturing a device. 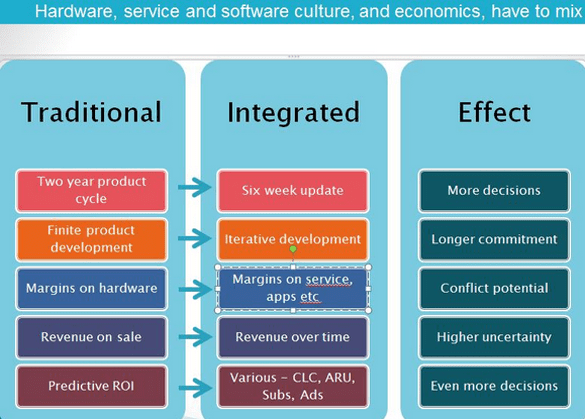 In the world of business, each area has its own "business culture", and the culture that produces great products may not be so great when it comes to service, for instance. Connectivity cultures, such as Facebook, Twitter, or Google, do not care about providing you with services – they collect data and sell it without ever telling you (although most people know how they operate by now).

Generally, one culture has the major role in company profitability, so it can cause problems when you either try switching your company's business culture or when you try to mix it up. Mr. Shaughnessy gives us the above chart/table to summarize what he means, and uses Samsung as the example of why they will struggle down the road.

Samsung has structured itself so that separate teams work on different devices, competing with one another, and that is how Samsung can bring so many new devices to the market each year and cut-down on the time it takes to launch new products, keeping new devices available to the public at all times. But what happens when you ask those teams to slow down as you shift your profitability away from selling hardware and to more recurring revenue from services and apps?

The rewards and incentives are taken away from the hardware people since it is no longer imperative to push as many devices out the door, and then start rewarding those that provide new forms of revenue in the software, services, apps and community – but it often takes a lot of time to build up that brand loyalty. Most companies that try, have a certain "bi-polar disorder," as they try to find the correct formula to make it all work; like Apple. The question remains if Samsung can truly change their culture without experiencing too much of a culture shock from within.