It's no surprise that Galaxy Note 3 will be available to as many carriers as possible, all over the world, but also in US. Samsung has succeeded in pushing their smartphones to a lot of sales channels, and they've also succeeded to keep the same phone model for all carriers in US, where historically the carriers are very stubborn about using the same phone model as their competition.

Verizon especially has been one of the biggest offenders here, but have no fear, the Galaxy Note 3 is coming to Verizon, too, and from a leaked document we already know what the prices will be like: $699 for the unlocked retail version, $299 on a 2 year contract, or $599 if you want it bundled with the Galaxy Gear, which means you'd be "saving" $100 on the Galaxy Gear, at least when it comes to the up-front cost to you (don't worry, you'll be paying more than that back and then some, during the 2 year contract with them). 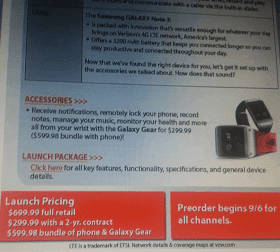 The $699 seems pretty reasonable, considering it comes with 32 GB by default (which, really, every flagship should have from now on, especially if they're going to add a ton of bloatware over stock Android), and you're also getting the special Wacom S-pen, and all the latest specs from 3 GB of RAM to Snapdragon 800. So the price seems quite reasonable for the Galaxy Note 3.

The on-contract price may seem a little steep for people who are used paying $200 at most for a high-end phone, but this is pretty much the price the Note has been selling for (at least initially) on Verizon, so there aren't many surprises there, either. If you want to get the latest Galaxy Note, you'll have to pay a little more, unless you're willing to wait half a year more, at which point you may be wondering about the Galaxy Note 4 anyway.

It seems Samsung is really pushing this "companion for Note 3" idea for the Galaxy Gear, and they're even willing to give you a discount of $100, if you buy the two together, which isn't a bad decision at all. But I'm not just sure how many people are dying to buy smartwatches right now. You can make your own decision when these devices are available in a few weeks.

Trusted By Millions
Independent, Expert Android News You Can Trust, Since 2010
Publishing More Android Than Anyone Else
34
Today
102
This Week
638
This Month.
638
This Year
110796
All Time