One of the biggest complaints about HTC is their lack of updates, and on the verge of Android 4.4 KitKat being launched, HTC is trying to get its flagship phone, the HTC One, updated with the latest Android 4.3 Jelly Bean by the end of September – HTC President Jason Mackenzie promised the HTC One Developer Edition would have their update by the end of this week.  Well, it looks like the flood gates may be opening, in Taiwan, anyway, and hopefully those waters will spill over to the HTC One Developer Edition soon.  XDA Developers shared this photo with us:

We can get a sense of some of the fixes HTC is pushing out along with the Android 4.3 Jelly Bean update for the HTC One from a tweet that was picked up from one of the lucky updaters: 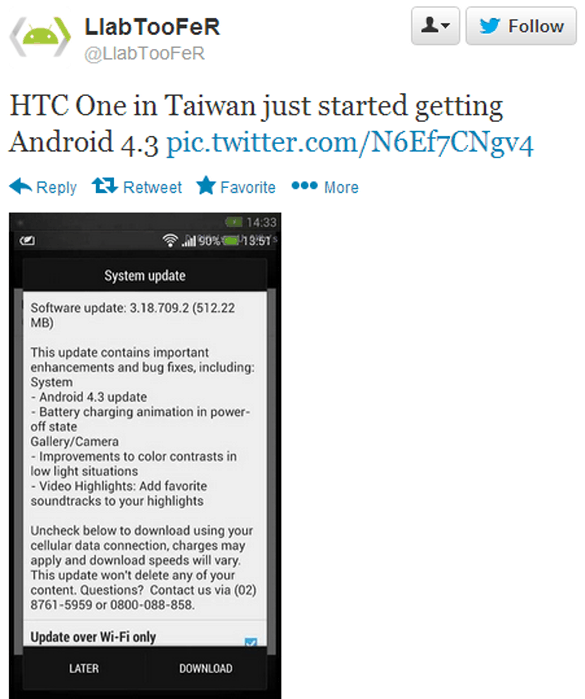 The file is large at 512MB and internally includes some radio fixes which will surely affect the device’s reception, and hopefully for the better.  There will be some visual changes as well, for instance, there will be new Battery Animations when charging while in the power-off state.  You will also be able to add soundtracks to your Videos and in the Camera area there have been improvements to the color contrast when taking photos in low light situations.

If what Jason Mackenzie said is true, then the HTC One Developer Edition should see theirs by the end of this week, and our Canadian friends should also get the update by the end of the month.  As far as the U.S., it will soon be on the shoulders of our carriers (hear that Verizon) to give the HTC One 4.3 update their blessing before they will release it for an OTA upgrade, and we all know how that process goes – it could be weeks before we see it.

The HTC One has been a well-received device for HTC, but they must continue to work on releasing timely updates or even sending out the newest Android release when HTC releases a new device.  HTC is working on the HTC One Max and will put Android 4.3 on it – how long will it be before it gets Android 4.4 KitKat, released in the same month?