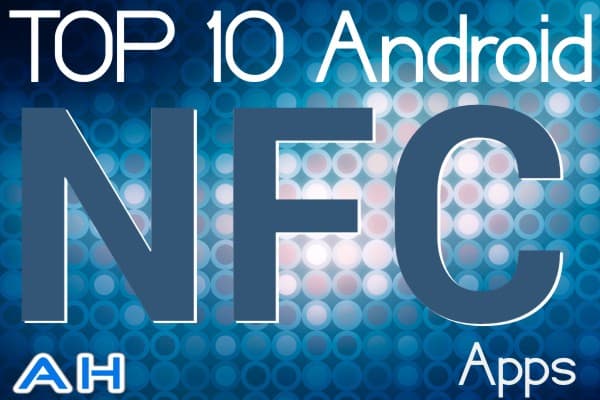 Some might say NFC is still not an adopted technology. I'd be inclined to agree with them. Not every device has NFC, and not every establishment can take payments via NFC. Although I did see a vending machine the other day that supported Google Wallet. We've already reviewed some NFC tags a few months ago, but we never really talked about different apps that could be used to write to those tags. With NFC tags, you can write to them so when your phone connects with the tag it knows to set an alarm, or send a text message, or call a contact, or many other things. Which is what all of these apps in this Top 10 do.

You might think from the name that this app is only compatible with Sony devices. But actually it is compatible with every device that I have reviewed in the past year that does have NFC. But it does only work with the Xperia SmartTags. So as long as you buy those your good to go. You can write to these tags, and name them as well. They make living easy.

Here's another tag writer that works with just about all of the NFC tags out there. It's actually cloud-based so that you can save your tags into the cloud and when you get new ones rewrite them very quickly. Some of the encoding options include Apps, Bluetooth, Call, Coupon URL, contact/vCard, facebook like, compose email, sms composition and much more.

Samsung has their own NFC tags, called TecTiles. The app appears to work with Samsung and Sony devices. But I do believe that the TecTiles only work with Samsung devices. With the app you can write and program your NFC tags as well as view which TecTiles you already have.

Just want a plain NFC tag writer? Well here ya go. It works with every device that has NFC capabilities. It can read and write NFC tags, there's also an option to buy more NFC tags. You never know when you might need a few extra.

This one's a little less nice looking, as far as the User Experience goes. But the NFC Tag Writer & Reader from Connecthings is an app that does exactly what it's supposed to do, read and write to your NFC tags you may have laying around.

Here's a great holo looking NFC writing app. You can read and write your NFC tags with this one, but if you are a Nexus 4 owner, you need to watch out as that device uses a different NFC chip than other devices. So you may want to use a different app if you have the Nexus 4.

This one could also use a makeover, it looks like it's stuck in the Gingerbread days. But it does do what it needs to do. With the NFC Smart Tags app, you can read and write your own NFC tags quickly and easily. You can also view previously scanned tags and rewrite them if desired.

Now this is one of the NFC writing apps I used when I was reviewing NFC tags earlier this year. It's a simple to use app that is holo-fied and allows you to quickly program multiple NFC tags quickly. It allows you to program web addresses, foursquare venues, address book contacts, phone numbers, emails, texts and much more.

This NFC writing app from NXP allows you to write to your NFC tags as well as read them and you ca store contacts, bookmarks, location, Bluetooth Handovers, SMS, email, text messages, toggles and so much more. All for free as well. The UI isn't quite holo, but it's pretty darn close, I must say.

Probably the most popular NFC writing app on the Play Store. NFC Task Launcher does have a phone and tablet optimized version of their app. It's got plenty of holo goodness as well. It allows you to read and write to your NFC tags, you can write Bluetooth, GPS, emails, texts, and many other toggles onto your tags using this app.