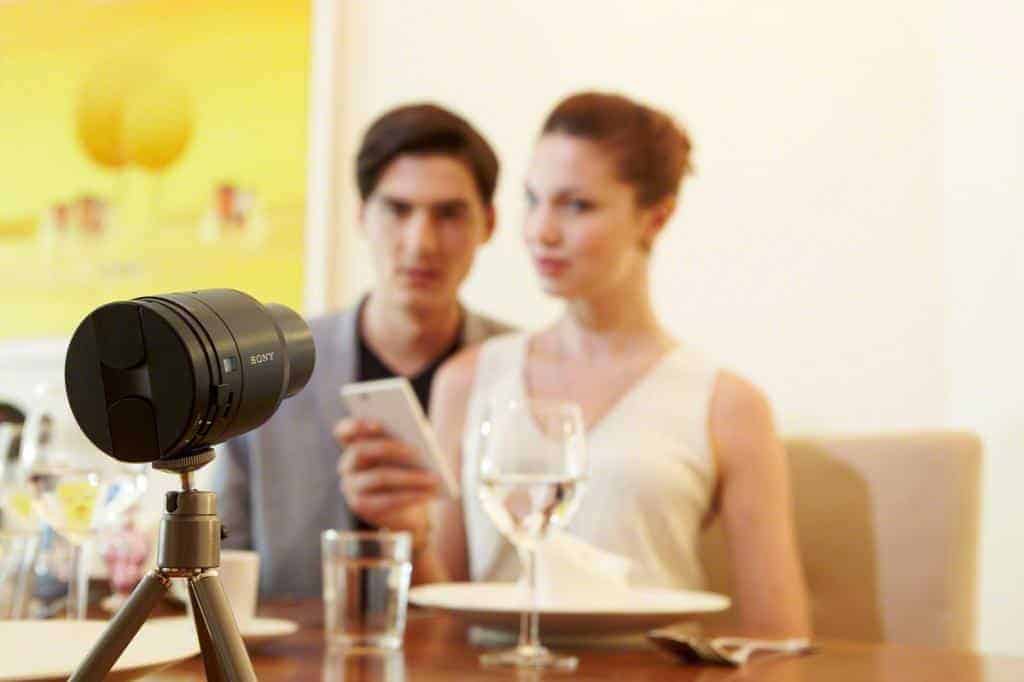 Tomorrow is going to be a rather busy day. We have plenty of press events. Although we pretty much know what's coming. Today, the folks at SonyAlphaRumors have leaked even more information. Including the specs, and a video of the camera lens.

These new camera lens are the Cyber-Shot QX100 and QX10. Both are going to be announced officially tomorrow at 4pm London time. The QX100 will be about $500 while the QX10 will be $250, at least according to this leak. Both lenses have plenty of specs, which are shown in the screenshots below. There are three parts to this one.

Sony is using their PlayMemories app which is going to be the hub for the QX cameras instead of a new app. It's also said to be updated soon to support these new lenses. In addition to the video and specs, SonyAlphaRumors has also leaked the entire press release that Sony is supposedly publishing tomorrow, which you can see at the end of this post.

We'll definitely have more coverage of the QX camera lens as well as everything else Sony has to unveil tomorrow at IFA. How many of you would buy one of these lenses?

Merging the creative power of a premium compact camera with the convenience and connectivity of today's smartphones, Sony today introduced two "lens-style" QX series cameras that bring new levels of fun and creativity to the mobile photography experience.

The innovative Cyber-shotâ„¢ QX100 and QX10 models utilize Wi-Fi® connectivity to instantly transform a connected smartphone into a versatile, powerful photographic tool, allowing it to shoot high-quality images and full HD videos to rival a premium compact camera. It's an entirely new and different way for consumers to capture and share memories with friends and family.

With a distinct lens-style shape, the new cameras utilize the latest version of Sony's PlayMemoriesâ„¢ Mobile application (available for iOSâ„¢ and Androidâ„¢ devices, version 3.1 or higher required) to connect wirelessly to a smartphone, converting the bright, large LCD screen of the phone into a real-time viewfinder with the ability to release the shutter, start/stop movie recordings, and adjust common photographic settings like shooting mode, zoom, Auto Focus area and more.

For added convenience, the app can be activated using NFC one-touch with compatible devices. Once pictures are taken, they are saved directly on both the phone and the camera*, and can be shared instantly via social media or other common mobile applications.

"With the new QX100 and QX10 cameras, we are making it easier for the ever-growing population of 'mobile photographers' to capture far superior, higher-quality content without sacrificing the convenience and accessibility of their existing mobile network or the familiar 'phone-style' shooting experience that they've grown accustomed to," said Patrick Huang, director of the Cyber-shot business at Sony. "We feel that these new products represent not only an evolution for the digital camera business, but arevolution in terms of redefining how cameras and smartphones can cooperatively flourish in today's market."

The new compact, ultra-portable cameras can be attached to a connected phone with a supplied mechanically adjustable adapter, or can be held separately in hand or even mounted to a tripod while still maintaining all functionality and connectivity with the smartphone. They can also be operated as completely independent cameras if desired, as both the QX100 and QX10 cameras have a shutter release, memory card slot and come with a rechargeable battery.

Additionally, the camera has built-in Optical SteadyShot to combat camera shake, keeping handheld pictures and videos steady and blur-free. It has Program Auto, Intelligent Auto and Superior Auto modes to choose from, and will be available in two different colors – black and white.

The new Cyber-shot QX100 and QX10 lens-style cameras will available later this month for about $500 and $250, respectively.

The cameras and a range of compatible accessories including a soft carry case and dedicated camera attachment for Sony Mobile phones like the Xperiaâ„¢ Z can be purchased at Sony retail stores (www.store.sony.com) and other authorized dealers nationwide.

Please visit www.blog.sony.com for a full video preview of the new Sony Cyber-shot QX Series cameras and follow #SonyCamera on twitter for the latest camera news.